Happy Friday!  Last week I did traditional clothes, and did you notice I skipped Jodha-Akbar?  That was on purpose!  I had this in mind already, our kingly men.

We can have all sorts of historical discussions about this ruler or that ruler.  But I think we should remember the most important consideration, Who Was The Hottest King?

First, a variety of Akbar and Hrithik options.  This top is  a bit blousy, but I like how foofy his hair looks.

Now see, all this embroidery is nice, but we can’t see his hair under the hat!

Or, of course, this:

Akbar was the greatest king in India, but he has a historical competitor, Asoka.  And Hrithik has a competitor in the “hottest King” stakes, Shahrukh.

Now, feel free to disagree with me, but I find Shahrukh‘s long Asoka hair strangely similar to the stuff I pull out when I snake my shower drain. See, the short hair in-disguise-as-a-peasant look is just so much better for him! Although I might allow for this sort of hybrid affect, with the modern bangs and kind of mullet long hair in back. Speaking of hair, what’s our feeling about Ranveer in Bajirao?  Great performance, sure, but how sexy is it?  This sort of works for me, partly because of his intense look, and partly because his head stubble is a little more noticeable. (and, of course, strangely similar to a wolf puppy)

But then there’s this, with the hat and all, and I just don’t know.  Although his expression is still great.

Obviously, we have to old-school with this, and throw in a Prince Salim option.  Sure, Mughal-E-Azam is the greatest historical in film history, but does that necessarily mean that Dilip Sahib was the hottest possible ruler?  On the other hand, he is pretty cute:

Veer is only sort of historical.  But I feel we should at least give the option of more of a guerrilla fighter type of king.  Although, again, it is a wig with that distinctive shower drain feel to it.

And finally, it is a Salman movie after all, let’s let him show off his most famous feature:

Now, there is one king that it occurs to me I have been missing.  He is clearly the best and hottest historical king, but which of these three options most clearly evoke him? 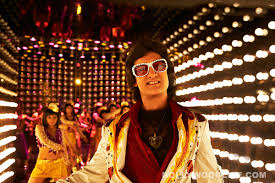 Oh and finally, as always, Garam-Dharam!  From Razia Sultan, which is kind of historical.