Welcome back to Bahubali!  I tried to resist, to fill that hole with Robot and Oppam, but it’s not the same.  So, time to return to Bahubaliland with some big picture discussions of major themes.

I’m going to assume that everyone reading this has seen both films.  And most of you were there through my incredibly detailed scene by scene breakdowns.  So I’m not going to bother with plot summaries or anything like that, we are past that now.

I will give a brief intro to the naming system I use (just in case you are new to our discussions).  Rather than dealing with which Bahubali is which and what is their regal name versus personal name versus nickname and who is whose mother and father and uncle and so on, I just use the names of the actors.  For the royal line of Mahishmati, there is Prabhas 1 and 2, our main characters.  And then going back in time, Prabhas 0 and Prabhas -1.  The one exception to this “always actors” rule is Sathyaraj, because Kattappa is such an indelible character I can’t think of calling him anything but Kattappa.

Okay, all on the same page now?  Here’s what I want to talk about.  Back when I saw Bahubali 1 in theaters, I was struck by Prabhas 2’s introduction, pushing his face through a stream of water.  It’s not a very common kind of introduction, not like driving a sportscar or striding into a room or flipping his hair out of his face or any of those things.  But it wasn’t like huge spectacular kind of thing, just a sort of small and clever idea, using the water as a curtain to suddenly reveal him to the audience.  And Prabhas looks good wet, I mean, his hair is thick enough that it doesn’t thin down when wet, and his sort of strong features do well with water to sort of highlight them.

And then I started noticing that he gets wet A LOT in this film.  His love song involves going in and out of a waterfall, his big fight scene is in the rain, he even gets an underwater swimming shot.  Honestly, I thought it was just because Rajamouli thought like me that Prabhas looks good wet.  He gave him a wet introduction in Chatrapathi too.

But now we have this film.  And here’s the thing, Prabhas 1 never gets wet!  In B1 or B2.  His hair is always light and fluffy and touchable, even when he takes down a dam, he shows up again moments later sparkling dry and floating on a block of wood.  But what Prabhas 1 does a lot is set things on fire.  All kinds of things.  He uses torches on cattle in one battle, fiery missiles in another.  Torches flare when he walks past them.  His death is against a blanket of fire. 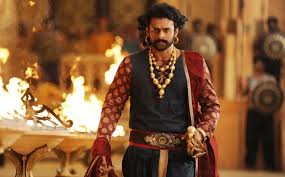 The essential elements, earth fire water air, all have personalities associated with them.  This is universal human nature, not western versus eastern or anything else.  Water is fluid, adaptable, sees no obstacles.  Fire is all powerful, unstoppable.  Earth is enduring.  Air is everywhere and nowhere, impossible to grasp.

If we look at these films, the elements let us read the characters.  Prabhas 1 is fire, Prabhas 2 is water.  Devasena is Earth (women almost always are, everyone from Gaia to Sita).  Her visual representation in the “present day” is strikingly similar to Nargis in Mother India, another famous representation of earth as a woman, or a woman as earth. 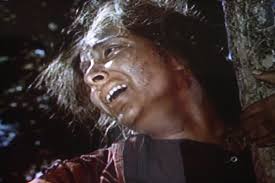 But air, air is hard to grasp, ever changeable and invisible.  Air is Tamannah, especially in “Dhivara”.  She is an air spirit, meant to be free and flying.  What Prabhas 2 has to do is free her from the grounded existence that has been forced on her.  Which he does, by washing her in his water.

All of the 4 main characters grow as they learn to master “new” elements.  Prabhas 2 chases air at the beginning of B1.  He finally conquers her, in a land that suddenly becomes green beneath them, signifying his new mastery of earth as well as air.  His arrival in Mahishmati is recognized by all 4 elements (this is not my theory, someone else pointed it out to me but I can’t remember who.  If you are in the comments, identify yourself!).  He rides through a wall, and past a bush that suddenly bursts into flame, then swims the moat, and then jumps over the wall, landing with a puff of air.

Not only is he greeted by all the elements, they take him through the story as well.  It starts with Anushka (earth), then Prabhas 1 (fire) bursts into flame.  Finally, Prabhas 2 (water) arrives.  And then he is joined by Tamannah (air) which is what brings him into the city.

Prabhas 2’s seemingly pointless ride through the ineffective burning rolls of hay while leaving the city is in fact signifying his mastery over a new element, fire.  And his moment of kingship is recognized by all 4 elements joined.  The rain, the mud on his face, the lightning coming down to reveal it and the wind in his hair as he turns.

Prabhas 1’s mastery is more gradual.  He is introduced on a drop of water.  A small drop, but still there.  It is on a steel blade, metal often being a secondary signifier for fire.  For all of the rest of B1, it is all fire-fire-fire with him.

Anushka at this time is all air-air-air.  Her intro is super windy.  She is an archer, a weapon loosely related to air just as swords are to fire.  And her personality, while strong, is also quick to change and hard to grasp.  Her love song to him shows their joint elements, showering him with air and fire

Considering that Prabhas 2, a water person, will be born of their love, it is fascinating how often water is part of their courtship when they both come together.  The dam bursting and the waterfall being created through the battle that Anushka inspires Prabhas 1 to fight.  His proposal taking place with water as a backdrop.  Him leaping down into the water to let her walk on him.  And, of course, their fantasy love song on a boat with the waves surging below them.

All that is missing is earth.  And that is Rana’s element.  You see, that’s why Rana and Anushka became opposing parties and Prabhas 1 and Ramya do as well.  Prabhas 1 and Ramya are both fire people (notice the torches during her introduction scene, both in the present day and in the past).  Rana is strong, slow to move and slow to change, but immensely strong.  Anushka, when they meet, is the opposite.  She flows right over him, hardly noticing him, and Rana rumbles beneath her, focused on those closer to him.

But “Dandaalayyaa” is where it starts to change.  Prabhas 1 masters his last two elements here.  Taking charge of the stone works and earth movements, and the water source.  Anushka begins to change too.  Settling, becoming steadier, surer.  That is why their life being destroyed feels like such a tragedy.  It is not like before in Kuntala, when Anushka was air and could just flow around it all, and Prabhas 1 could just burn through it.  This time, they had roots, they had something that was not meant to change.

And so Anushka doubled down on that.  For 25 years, she was the earth, the immoveable object that Rana kept pressuring and pressuring and it just made her stronger.  Keeping the fire of Prabhas 1 within herself, waiting for it to come back.

Ramya changed too.  Not during “Dandaalayyaa” (notice the little glimpse we have of her is still lit by torchlight).  But at the end of B2/beginning of B1.  She starts out all fire, declaring that she will bring Rana up on charges.  But that won’t work, the brute earth strength of Rana can defeat her fire.  So she tries a different way, for the first time in years, and turns into water, working her way around obstacles.  She escapes through a water way, climbs behind a waterfall, and finally gives herself up entirely to the current (both literally and metaphorically).  And Prabhas 2 survives, a child of the water.

Water is late to show up in the final battle.  The silly palm tree catapults are clearly air, fire is fire, and earth is that massive destruction of Rana’s city.  Water only appears at the end, when father and son come together to enact justice, rain and lightening again.

Now, a note on how literary criticism works.  I am not arguing that Rajamouli and everyone else sat down and plotted out everything exactly as I just described it.  I think they probably went “hey, every time Prabhas 1 gets angry, let’s have the torches flare!”  And they probably went “since the waterfall is so important to Prabhas 2, let’s have lots of water around him all the time”.  And “let’s make Tamannah in ‘Dhivara’ hard to grasp, like air.”  And so on and so on.

What analysis tries to do is to say “now, why did the creators want to do this?”  Not their conscious thoughts, because no one sits down and works out every little detail like this.  But what is behind the subconscious, why did it “feel right” for Prabhas 2 to be so watery and Tamannah to be so airy?  Why out of all the peasant villages possible did it seem correct to put Prabhas 1 and Anushka in a stoneworkers village?  Why was Anushka’s face so caked in dirt?

This isn’t the “right” answer, because there is no “right” answer, but it is constructive to try to take apart where the meaning is in these choices and why we can sense it instinctively.  It helps to understand things in the “real” world, to interpret hidden messages we may not realize we are receiving, and others may not consciously be sending.  And it’s fun to consider our favorite “fictional” worlds from a slightly different angle.

20 thoughts on “Bahubali 1 and 2 Theme Post: The Significance of Fire and Water, or Why Prabhas 1 Has Fluffy Hair and Prabhas 2 Has Wet Hair”