Well, this is FASCINATING!  It didn’t hit me until I watched the Chef trailer and then the new Judwaa 2 song right next to each other, but they are both remakes!  In ways that couldn’t be more different.  A sign that the industry doesn’t know if it should look back, or look out for the new hit.

I have to admit, I haven’t seen the original Chef.  But moviemavengal did and she told me about it.  And so did my parents and THEY told me about it.  And I read reviews and stuff after that.  So it’s kind of like I saw it?  Anyway, the stuff I want to talk about here isn’t related to any details, it’s just general stuff about the film that I could absolutely know just from what I’ve read/been told.

You know Jon Favreau?  If you are a certain person of a certain age in America, you just went “Oh, Jon Favreau!”  And if you are not that person, just so you have a picture in your mind, you remember Monica’s millionaire boyfriend from season 3 of Friends?  It’s that guy.

Back in the 90s, there was this very particular kind of actor/artist that started popping up.  They were smart, not just pretty and handsome.  They were friends with other smart people and liked to make smart off-beat things together.  They tended to come out of stand-up or like “real” acting schools (Julliard and stuff), or else improv (that’s where Jon came from).  And the American film/TV industry was in an odd point in the 90s that let this fun off-beat things be kind of mainstream for a while.

Jon Favreau was one of those guys.  The biggest thing he did back then was the movie Swingers, which had kind of a similar reception to what The Big Sick is getting now.  Not the same by any means, but similar.  Small film with a lot of really good people working in it and on it because they all liked each other and were eager for work.  Really sweet kind of story that no one else was telling just then, showing people like you didn’t see in other movies. 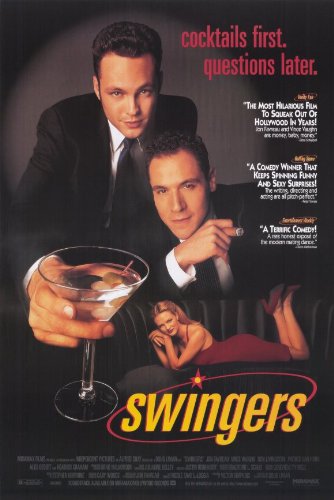 (It’s basically nothing like the poster.  This is a marketing man gone mad)

So he kept working, and became that guy who played the friend of the hero.  Often because in real life he WAS that friend of the hero.  He stayed in touch with all those people he knew from back in the 90s when they were starting out, and would take small roles in their films.  And eventually when he decided to turn director of his own small film, he was able to call in some of his friends and it became a minor hit.  Which got him the job of directing a small comedy film, Elf, that turned into a surprise hit.  Which lead to his big big job, directing and helping to produce Iron Man, for his long time friend Robert Downey Jr.

And from then on, his career was made.  He could do all the big budget films he wanted, unlimited budget and promotion and everything else.  But strangely, in the midst of directing Cowboys & Aliens and The Jungle Book and Iron Man 2 and all these big big things, he also kept acting!  In tiny little “friend of the hero” roles, just like before.

And then he made a movie about that.  Sort of.  Chef was made on a budget of 11 million, in between the 163 million Cowboys & Aliens and the 175 million The Jungle Book.  It’s a tiny story which takes all his superstar connections and big deal successful film experience and uses it to make a nice small film.  And that’s also the plot of the film!  A big deal Chef who is disillusioned with his life and quits to open a food truck with good friends and get back to the small joyful place he started.

Did you notice the same thing I did?  It’s still autobiographical!!!!  Only instead of a superstar director getting back to his indie roots with the help of his friends, it’s about a super cosmopolitan single father getting back in touch with his son.  They took the basic idea, big deal chef who quits to open a food truck and said “okay, if this stars Saif Ali Khan instead of Jon Favreau, how can we still make it meaningful?”  And the answer was to make it about Saif as a single father, relearning an Indian identity.  Yes, the original also had a father son relationship, but that wasn’t the main impetus for change, it was the professional disillusionment that drove everything.

Also, thank goodness they figured out how to make a food truck make sense in India!  Do you know about food trucks?  It’s this thing that is suddenly cool in American cities.  Well, not “suddenly”, it’s been going on for over ten years now.  Food trucks used to be a really working class thing.  Usually you would see them outside factories, the idea being you could park just outside the gates so they don’t have to walk all the way off the grounds for lunch, and you would show up right before the noon whistle, and leave right after to hit up the next factory.  Cheap street food, not that great and not that bad.  I’m guessing the Indian equivalent would be something like a chai and dosa cart (dosa? I don’t know what the cheap street food would be) that knows just when to move over outside a workshop to get people on the midday break, and then wheels down the road to a different workshop for the next break.

Anyway, it is suddenly “hip” now and there are all these food trucks that offer expensive gourmet food and park by big fancy concerts and stuff instead of outside of working places.  For people who could perfectly well go eat somewhere else, they have the time and money, but the food truck is a “cool” way to do it.  And it’s the “cool” way to work in the new economy because you can open your own food truck a lot more easily than your own restaurant, and the restaurant market/jobs have kind of fallen off lately in the US.

So, none of this translates to India!  And thank goodness, they aren’t pretending that food trucks are suddenly “a thing” or something like that.  It’s very location specific, a Kerala (it is Kerala, right?) tourist area is exactly where the food truck model would work, a bunch of white people who are familiar with the concept, and lots of outdoor events where people with disposable income would like the fun of a different way of eating.

Those are all my very complex background thoughts, for the film itself, looks fun!  I’m really glad to see Saif playing his own age and background, instead of trying to be young and/or tough.  Very interested in the idea of a father-son story, don’t know when was the last time we had something like that.  Oh, and it looks like the director is a Malayali (and directed Airlift), and the heroine is Padmapriya, who was my favorite part of Kerala Verma.  So that’s all good too.  I am cautiously optimistic.

Okay, deep thinking over with, time for Judwaa 2!  Look, a Ganesh song!  I wonder if the film will take place in real time?  I assume this is long-hair Varun’s intro song.  So maybe we follow a month in his life, ending with Gandhi’s birthday/the actual release weekend?  That might be cool.

Otherwise, this is very much “Look!  A Varun Ganpati song!” and I don’t really have much else to say about it.  The hair looks good on him, but based on the full trailer, his character will be cutting it soon for maximum confusion, so we shouldn’t get too fond of it.  And that’s kind of it?  It’s a big fun bright song, what’s to say?

But then, that’s the point!  This is a big fun bright movie with not a lot to say or think about.  It’s a remake, by the same creative team, of another fun bright movie.  It is 100% Indian in background, trying to hit that nostalgia in the Hindi film audience.

And it’s coming out right next to a film that is 100% not-Indian, a remake of a very specifically American film.  Isn’t that interesting?  Isn’t that a sign of the industry trying to find itself?  Should it be taking the overseas films and turning them “Indian”, trying to appeal to that same globalized sensibility?  Or should it double down, go even more “Indian” than before?