So, big twitter news in India, summarized here, Rishi Kapoor tweeted birthday wishes to Twinkle Khanna yesterday, saying “Happy birthday dear one!  You were in your mums tummy when I was serenading her in Bobby”Aksar Koi Ladka” In 1973 lol.”

Today he clarified with a tweet saying “Kakaji-Dimple married in March’73. Bobby released Sept 28th ’73. Twinkle born 29th Dec ’73.This clarification should rest some of the idiots”

The first tweet was kind of a creepy-uncle thing to say, but why did the Indian press lose their collective minds over it?  Read on to find out!

So, in 1973, Raj Kapoor invented the teenage romance with his film Bobby.  It starred two unknowns, Raj’s 21 year old son Rishi, and the school girl daughter of a wealthy businessman, 16 year old Dimple Kapadia (well, turned 16 during filming).  Huge huge huge hit upon release.  Launched Rishi’s career, but did nothing for 16 year old Dimple.  Because she was already married and retired.

Before her 16th birthday, Dimple married the biggest heart throb and all around star India had ever seen, 31 year old Rajesh Khanna.  He had been dating another actress, who was age appropriate for him, Anju Mahendru, and then they broke up out of the blue and he marries this 15 year old school girl whose first movie hasn’t even come out yet.  It was quite the thing.

(here she is getting married, and Lata Mangeshkar is also there for some reason)

Bobby comes out, the world falls in love with Dimple, but she declares she is happy being a simple wife and mother.  Meanwhile, everyone knows Rajesh Khanna is cheating on her left and right.  After years of putting up with this, Dimple finally walks out and goes back to her career, reuniting with Rishi Kapoor for Saagar. She also starts a long term affair with married actor Sunny Deol, but we don’t talk about that. 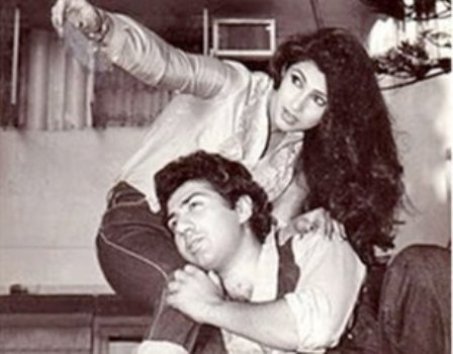 (look how happy they are!)

Rajesh and Dimple never got divorced, but they had a cordial separation.  She supported him when he ran for political office, and when he was dying a few years ago, she moved back into his house to take care of him.  She’s always publicly spoken and acted like a loyal and devoted wife.  But, why?  He was a 31 year old who married her when she was 15!  And why did he even  marry her? They barely knew each other and it wasn’t like he had a thing for young girls before or since then.

Smart money has always been on it as a career move, Rajesh was slowing down, what better way to energize the fan base of teenage girls than to actually marry one of them?  But thanks to Rishi, we now have an alternative answer!

As a billion calculators come out and start subtracting March from December, a whole other possibility becomes apparent.  Which means on the one hand, Rajesh stepped up and did the right thing, no wonder Dimple stayed so devoted to him!  And on the other, ew!  Rajesh seduced a 15 year old!

1 thought on “Why the Hungama about Rishi Kapoor and Dimple?”