Gaaaaah!  The 3rd or 4th or 5th or 200th small thing just went wrong for me this week.  I hate that!  When everything is just slightly off and then doesn’t work.  So you get to listen to me vent because that will make me feel better.  And also explain why there have been so many reruns this week, because I’ve been wasting my time on other stuff that ended up being pointless.

Where shall I start?  Well, last Wednesday I was supposed to have a rehearsal for my church service that I am giving today, I went all the way down to church after work (not a small thing, it’s 40 minutes both ways so that kind of kills the whole evening), after first rushing home to walk the Dang Dog, only to discover that the technology I needed to test out, the main reason for this rehearsal, had not been set up.  So we did a half rehearsal, but I knew I had to come back again for another hour and 20 minute time waste just to test that.

(Dang Dog.  She will be a recurring theme)

Last Thursday my friend who is going to India this week finally got around to asking if I wanted something.  And, as always with India stuff, I wanted one incredibly specific and rare item and would prefer to purchase it through an Indian website and have it shipped to her in India rather than trust her to get it.  She gave me the address where she would be staying, I got halfway through the amazon.in purchase and realized the address wasn’t a mailing address just a street address, but I couldn’t cancel the order either.

(This is the thing I want.  To replace my Hema Malini version which I have worn down to nothing.  It’s not a rare item, it’s just impossible to get from a website that will ship to America.)

On Friday, I was going to leave work early so I could catch the early show of Raid instead of needing to be up super late, only one of my co-workers had a family emergency, so I couldn’t and was up late anyway, followed by getting up early in the morning to go see a trainer about the Dang Dog as requested by the shelter.  Which resulted in the trainer giving me a bunch of tips as though I am going to train this thing into being better, instead of just wanting to get rid of it.

(I am the Ramante Edanthottam heroine.  The Dang Dog is the husband drinking in a corner who won’t even let her be herself.  Why train and adjust?  You will never be truly happy, just separate)

On Sunday I went to teach Sunday school and learned that my co-teacher hadn’t shown, I was able to talk someone else into volunteering to just sit there and be an extra person, lead the whole lesson on my own, and then went home to discover an email from the RE director, not thanking me for pulling this off, but ticking me off for not taking attendance.

(How many kids were there?  A LOT!  There were A LOT!!!!  And I educated them and inspired them and kept them happy all by myself)

On Monday I had to do the make-up tech rehearsal, which meant rushing straight from work to church and then back home, which meant Dog was even crazier and needier than usual once I finally got home.

(I can see why Anushka tried to get away.  This kind of love is sufficating and kind of selfish)

On Tuesday, we had an election here and the really exciting promising candidate lost because the rich bozo with a lot of money managed to convince people to believe campaign ads instead of every legitimate source which all recommended the promising candidate.

(No, Yuva, sometimes being clearly the honest exciting promising candidate DOESN’T do anything, not when the election funding laws have been gutted to such an extent that you can, legally, buy an election)

On Wednesday I finally got a real Indian address and was able to complete the order, only to get a notice that my payment had already been processed, and it would be arriving 2 days after my friend left India.

(Same reason it took me a long time to watch Daddy.  People NEVER believe me when I tell them that they need to give me their mailing address, not just ask for a list, because the thing I want will not be available in stores and I will need to order it online in advance.  First time I wanted Daddy, they said “oh no, I can get it in my local DVD store, just give me the title” and of course they couldn’t; second time they said “oh, shipping should be easy, I’ll give you the address last minute”, and it was delivered late from the one place in India that still had a copy.  Third time I just checked websites every day until another copy appeared, and then paid $30 in shipping to have it sent to me in the US)

On Thursday I had to finish a really important work thing, but instead I ended up on 3 separate phone calls with costumers who decided they could only talk to me, and then ended up rambling on for over an hour about nothing. 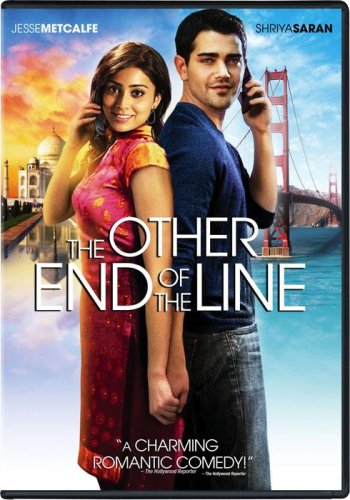 (I still haven’t seen this movie, but I can tell you that working tech support is much less likely to result in a charming romance, and more likely to result in you needing to be very patient while the person on the other end of the line talks to themselves out loud and solves their own problem, and yet they still felt the need to talk to me, the supervisor, instead of any other staff member who could just as easily have sat there saying “uh-huh” every 2 minutes)

On Friday I got a call that the THIRD adopter had just canceled a meeting with the Dang Dog so I was back in foster limbo.  Have I mentioned that I haven’t slept through the night in two weeks because of the Dang Dog?  She sleeps all day while I am gone and then parties all night while I am home.  She desperately needs a dog walker at least a couple of times a week just to entertain her, and obedience classes to challenge her, but I don’t have the time or money to do that for a foster dog which is why I TOLD THE SHELTER I COULD ONLY DO A MONTH!!!!!

(I was counting down the days at the start, but then it just got too depressing as it went from one month, to a month and a half, to two and a half months and counting.  I’m just so tired)

On Saturday I got a delivery notice for new shoes (a very big deal for me, I buy shoes once every 4-5 years, and I buy really high quality ones so they are super expensive) which were delivered to my office, which is closed on Saturdays.  So now they are in delivery limbo too, just like my India package which is who-knows-where.

And my parents wanted to see Raid with me this weekend, but just as we were finalizing plans, the movie theater changed the schedule and now we can’t.

(Raid would have made everything better)

And then this morning I went to church super early to do a final tech check only to discover that the projector has suddenly completely died, meaning I got up at 6:30am today after another night of no sleep in order to get here early for no reason at all, plus the one thing I really wanted for my service isn’t working.  Plus, come to think of it, the whole extra rehearsal on Monday and all the other agony wasn’t worth it either.

(Also, I really will have to do this during the service, because now I’ve got a 5 minute gap to fill.  Maybe I’ll call all the kids up again and take attendance in front of everyone, just so the RE director can see me do it)

Oh, and the coffee place ran out of cream just as I got my order.  That’s the real tragedy.

(Only thing that would have been worse is in Shruti Haasan had been here mangling Hindi and making me listen.  But coffee without cream is pretty bad too)

The funny thing is, my service is about how I use film to make me feel better when I feel down.  So I am going to listen to my own lesson and put in my headphones and watch this video before I leave the coffee shop and go back to church to give the service.

21 thoughts on “Venting Post: You Ever Had a Week Where Everything Went Wrong?”