I just ordered possibly the last copy in America of the only English language full biography of Savitri.  But it’s shipping from a million miles away, and it looks dauntingly thick, so I have no idea when I will finish reading it.  In the meantime, I wanted to put up a post based on the very superficial information I have gathered by reading every single English language article I could find on The Internet about Savitri and her associates.

Usual Disclaimer: I don’t actually know these people, I have no inside knowledge of anything, and I really don’t know the Telugu film industry.  This is just the general knowledge that is accepted about these people.

Savitri is “like” a lot of other actresses, everyone from Meena Kumari to Sridevi.  But she’s not exactly the same, because no one person is ever exactly the same as any other person.  Instead of using a simple “a=b” kind of description, I want to see if we can come up with broad categories in which she will fit.

Like Vyjantimala and Waheeda Rahman many other actresses, Savitri came from a classical dancing background.  Bharatnatyam, the general southern Temple dancing tradition, went through a bit of a rebirth as part of the Independence movement.  The British tried to turn it into something shameful, but powerful voices fought back and reclaimed it as something noble and good.  Which meant that “respectable” little girls in the south might study dance, and even perform professional, without crossing that invisible line that made the no longer respectable.  Savitri was one of those little girls, her father died when she was very young, but her family still had a strong support in her uncle, she had a decent education and studied with an excellent classical dance teacher.  And then, once she had completed her training at age 12 (as is traditional), she began to perform professional with a dance troupe, always properly chaperoned and protected by her Uncle or other relative.

(This is here at age 15, in her big break through dance performance in a film in which she had a small part)

Like Nargis, and Nutan, and Tanuja, and most other actresses of the era, Savitri began playing adult roles in films at an extremely young age, her first attempt at joining films at age 12 when she was deemed “too young”, then returned a year later at first cast in a vamp role until it was decided she was again “too young”, finally having two small parts at age 15, and then her first lead role at 16.  Which made her a star.

Like actresses from Devika Rani to Madhubala to Vidya Balan, Savitri married a man who had been married before.  As an actress, she had a rare ability to move out in the world and meet men who might otherwise not be appropriate.  And she also had the ability to make decisions for her own life, a family that is open to their daughter acting might be willing to also accept her nontraditional choice in a mate. 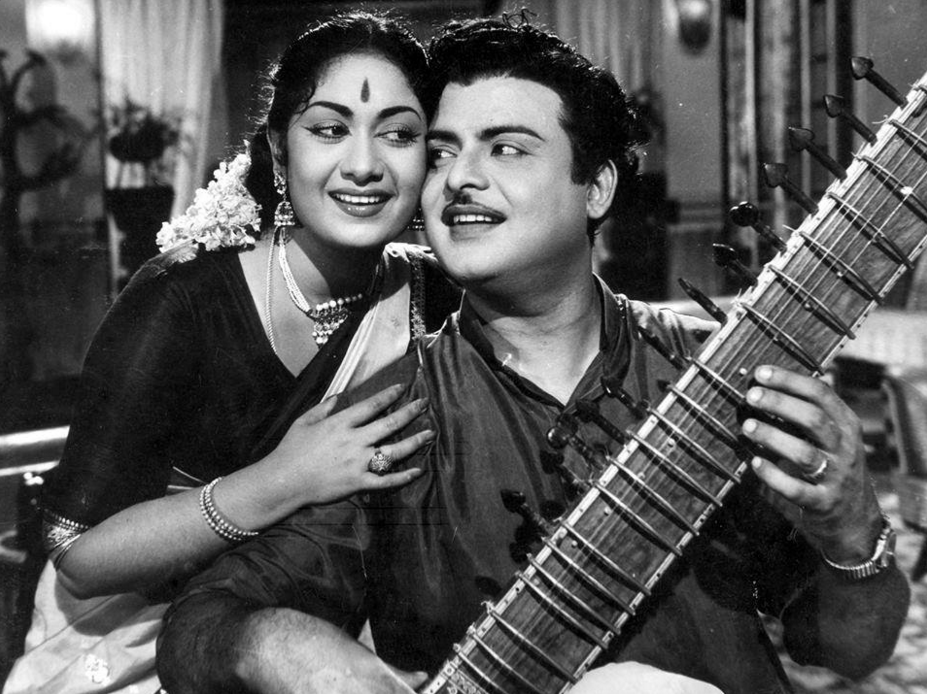 (Here she is with her husband.  I truly do not get what all these women saw in Gemini)

Like many full figured lovely young stars, she turned into a slightly heavier older woman, but UNLIKE many of them, it did not stop her from continuing in her career.

(I still don’t get what she sees in him.  He’s okay I guess, but he’s not “I will turn my back on society and my family” handsome)

Like many young female stars, the roles as the sweet innocent heroine became less realistic and harder to come by as time went on, but UNLIKE many of them, Savitri was talented enough to transition to more mature characters, even to produce and direct, while still remaining popular with the public.

Like many young women who married not-so-great men, Savitri was left to raise her two children mostly on her own, but UNLIKE other women, Savitri sent them to the best schools and raised them in happiness and comfort, marrying her daughter off respectably and establishing her son in a career.

Like many people in the film industry ranging from Meena Kumari to Mahesh Bhatt, Savitri eventually became an alcoholic, a disability that is easy to hide and easy to indulge in the more open filmi atmosphere, and like many alcoholics, she died young, only 46.

As for the basics of her life, in that same 16 year when she had her break through role, she also met Gemini Ganesan.  In fact they had met earlier, before he began acting he had been the photographer that took her test photos when she was 12 and first visited the studio.  Gemini was a “respectable” person, a college lecturer turned aspiring actor.  He had been married young to a respectable wife with whom he had a couple kids, then got bitten by the acting bug and got a job at his relatives studio.  Where he got his first big break partly thanks to Pushpavalli, an older actress, not a major star but a name star, who encouraged him and fell in love with him.  She was not from a respectable family and a respectable background, and she became his mistress.  And at the same time, Gemini also fell for young fresh-faced and respectable Savitri.  He married her, it being legal at the time for a Hindu man to have two wives, and they had two children.  At the same time he was also having two children with Pushpavalli, his mistress, one of whom would grow up to be the actress Rekha.

(And if I am understanding this correctly, Savitri was a bigger star than all of them.  Rekha, Gemini, and Pushpavalli)

Savitri kept working while pregnant, and after giving birth.  She went from a promising young actress to a brilliant subtle artist, revered and beloved by not just her home industry of Telugu, but Tamil films as well.  She was only in one Malayalam film, a surprise flop, and just a handful of Hindi films.  Another comparison that does not work, quite right, Savitri as Sridevi.  On the one hand, Savitri had classical dance training that Sridevi never did.  On the other hand, Sridevi started acting as a child and was a star from the start while Savitri had to struggle.  And the biggest difference, to me, while Sridevi became equally big in Hindi, Tamil, Telugu, and Malayalam, Savitri was something a little special just for the Telugu and Tamil industries.

She was always a talented artist, singing, dancing, acting, and eventually also directing and producing.  But she struggled, as do many (if not most) artists to balance her personal life.  Her uncle/manager stopped managing her career after her marriage, and Savitri somehow juggled motherhood, acting, and career management.  Eventually it was money management that fell to the side.  She was known for spontaneously giving massive amounts to charity, not bothering to keep track of the cost.  Although her children also remember that they never felt hungry or deprived, she managed to keep her household running smoothly through it all.

Savitri died at age 45, after being in a coma for 19 months.  Her daughter remembers that Gemini was there through it all, being supportive and caring like any husband.  Her personal life was difficult and strange, but not really that different from anybody else’s.  She fell in love with someone and it was complicated and didn’t work out.  But they had kids together, and he was always part of her life.

What makes Savitri remarkable is not her personal life, but her professional accomplishments.  A star dancer at 12, a movie star at 16, a director by 34, and the top actress with critical and popular acclaim for two industries for 20 years.

At least, that’s what I got based on a quick tour of The Internet.  Stay tuned for when I eventually receive and read the full biography!