It’s interesting, both Kahaani and Rock On are less-Indian in style, no real song sequences, “realistic” acting, natural looking settings, and little melodrama in their stories.  But Kahaani, ultimately, still feels really Indian to me.  It’s focused on family relationships (marriage, pregnancy) and it’s grounded in uniquely Indian issues and philosophy (all the connections to Durga Rani, all the street scenes of Calcutta).  And now the Kahaani sequel is more of an Indian sequel.  Like the Khiladi films or KKHH and K3G, with loosely similar characters and cast and tone, but not an actual continuation of the story.

As for the trailer itself, I AM SO THERE!!!!  I’m not even going to try to guess what all is happening and what it all means, I’m just going to assume that Vidya is doing something awesome no one else can understand and Arjun is somehow getting trapped in her web.  Could easily believe the twist is that there is no child at all, or Vidya is actually evil, or Arjun is evil, or I don’t even know!  I’m just along for the ride.

And then there’s Rock On 2.  Eh.  A new school sequel that actually follows the same characters from the first film.  But, I’m done with those characters!  I am happy with where we left them, I don’t want any more, their story was concluded.  But at the same time, I am even less interested in Shraddha Kapoor’s new character.  It’s just “eh” all around.  And I am NOT along for the ride, I want to figure out the clues and figure out what happens from the trailer so I can control my reaction and decide if I even want to see the film.  Oh, and the trailer is only available on ErosNow, as part of their stupid “cut of my nose to spite my face” effort to get people to their website, at the cost of limiting the reach of the promotion for the films that support the whole company.  Click on the poster image below to be taken to the trailer. 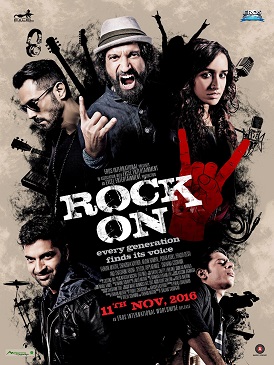 So, right, since I’m not willing to just go along for the ride, here’s what I think is happening.  Arjun has become a celebrity on TV shows and stuff since the band made it big again a few years back.  Farhan is now the tormented artist with the long hair and stuff.  Sweet Prachi feels disconnected from him.  Purab Kohli is back and excited to get the band together.  They bring in Shashank Arora to play a new band member who looks like he doesn’t get much of a part (see how tiny he is on the poster).  And then Shraddha is a new singer who is shy and has stage fright, but then they slowly dig in and discover she is all tormented and dark, and Farhan mentors her.

All I can say is, if they kill Prachi just to give Farhan angst, I will be VERY UPSET!  I loved Prachi in the original!  Instead of being the usual wet blanket wife, she was the wife saying “you’re unhappy!  You should go do the thing that makes you happy!”

4 thoughts on “Trailers! Kahaani 2 and Rock On 2! (One of These Sequels is Better Than the Other)”