Happy 43rd Birthday Hrithik!  This is an UPDATED post from last year, last year I did 15 reasons for the number of years since you were launched, this year I am doing 26 for your age when you were launched.  And maybe this year I can resist posting that photo of you as a teenager with the Khans. (Spoiler: Most of my reasons are dances)

1.1. I love you because you were an industry brat on both sides, your maternal grandfather being a producer and your father being a failed actor-turned director

2. I love you because you made your unofficial “debut” at age 8, when you spontaneously started dancing while visiting your grandfather on set during a song sequence, and he turned the camera on you to capture it.

3. I love you because you made your official child debut just a few years later, playing a child’s role in one of your father’s films

4. I love you because you spent years preparing for your adult debut, including dance lessons, work outs with Salman, and waiting for your Dad to create the perfect film and your uncle to write the perfect songs, instead of just taking the first chance that came along.

5. I love you because your face is so perfect it looks fake

6. I love you because your hand is so imperfect it looks fake, and yet you have never been tempted to fix it.

7. I love you because you put your son in Bang Bang in the cutest Friendly Appearance ever! (He was the little boy in the bus who helps during the car chase)

9. I love you because every dance number you do is amazing, even the less famous ones.  Like this, from epic flop Aap Mujhe Lagna Laage.

10.  Or this, from Mission Kashmir, which did well but is not generally known for songs.  Plus, you are playing a terrorist, but for some reason your character is also an excellent dancer!

11.  Or this, from Main Prem Ki Diwani Hoon (terrible movie).  Not that much dancing, but the chemistry is off the charts (explaining the Kareena affair rumors)

13.  Although sometimes he prefers Rani.  And creates a massive multi-dancer show including perfectly recreating the original dance steps from dozens of different classic songs.  And then Blowing Your Mind by doing a song from one of his own films to end it all up.  In this universe, is there a famous actor Hrithik Roshan who happens to look just like the character in the film who is imitating his famous actor dance?

14.  You make me believe I can understand Spanish (and then I realize it is half Hindi).

15.  You aren’t afraid to use your body to get a woman.  And to make it the best part of the movie, and even the production house knows it.  Last year I was able to post a youtube video of the whole scene.  This year, although the other sword fights, the songs, and the love scenes are all still up on youtube, UTV has pulled every version of the sword practice.  Because they know it is the one thing that will get people to buy the movie if they can’t see it for free. 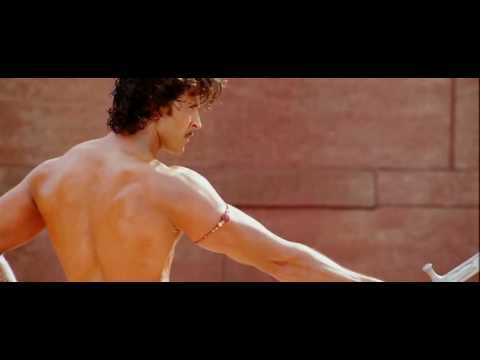 16.  You did a cameo that makes no sense but is still delightful in Don 2

17.  This song, which still makes me smile so big my face hurts every time I see it, even though I have watched it at least a thousand times in the past year.

18.  Even in a bad movie, like your big release of this year, somehow your grace is almost enough to rescue the film.

19.  And while nothing could rescue Krrish 3 from being TERRIBLE, I appreciate that you had the business sense to trust your father’s judgement and make it, and sure enough, it turned out to be your biggest hit.

20.  I also love you for being one of the first young stars to slow down and do fewer films at a time.  A path Aamir was already on, but which the younger actors feared.

21.  I love you for being the first young star to truly challenge the Khan domination.  And ultimately prove that the industry had enough space for multiple stars in multiple films.

22. On a more personal note, I love you for bucking the accepted wisdom and marrying the woman you loved even as you hit your heart throb peak.

23. I love you for being an involved and hands on father to your sons.

24. I love you for working with your now ex-wife Suzanne to provide India with a vision of happy and respectful co-parenting post-divorce.

25.  I love you for helping to provide the JUICIEST GOSSIP STORY IN HISTORY with your law suits and countersuits and police reports and American hackers and so on and so forth.

26.  And finally I love you the original, and still the best, Hrithik hit.

(PS Nope, can’t resist after all.  Sorry Hrithik, maybe I’ll manage to skip it next year!  Your arms are just so long and skinny!)

5 thoughts on “Happy Birthday Hrithik! 26 Reasons I love you”