Congrats again to Anushka and Virat!  In their honor, I am pulling out and updating a post I did a few years back on the intersection between Cricket and Hindi film stars.

First, Anushka and Virat!  They have been together for the past 4 years, so far as we can tell from papparazi photos.  Virat, as the captain of India’s cricket team, is essentially the designated Prince of Indian sports.  A very very big deal.  Anushka, of course you know if you are reading this blog, is a very popular and successful actress.  Anushka was previously rumored to have been dating Ranveer Singh, but it was never necessarily confirmed.  But with Virat, even if it was just photos of them together, well there would be no reason for them to interact if they weren’t dating!  It’s not like they were coworkers or anything.  Supposedly they first met and started dating after doing an advertisement together in 2013.  And then in 2014, Virat blew her a kiss from the field during a match.  Which is, of course, swooningly romantic.

(See Anushka swooning in the stands?)

They ran into a bit of controversy in 2016, when Anushka was blamed for Virat playing badly in a tournament, she was “bad luck” for him, got a lot of hatred.  Which goes to show that people in India care more about Cricket than movie stars.  In response to which, Virat posted this tweet in support of her. 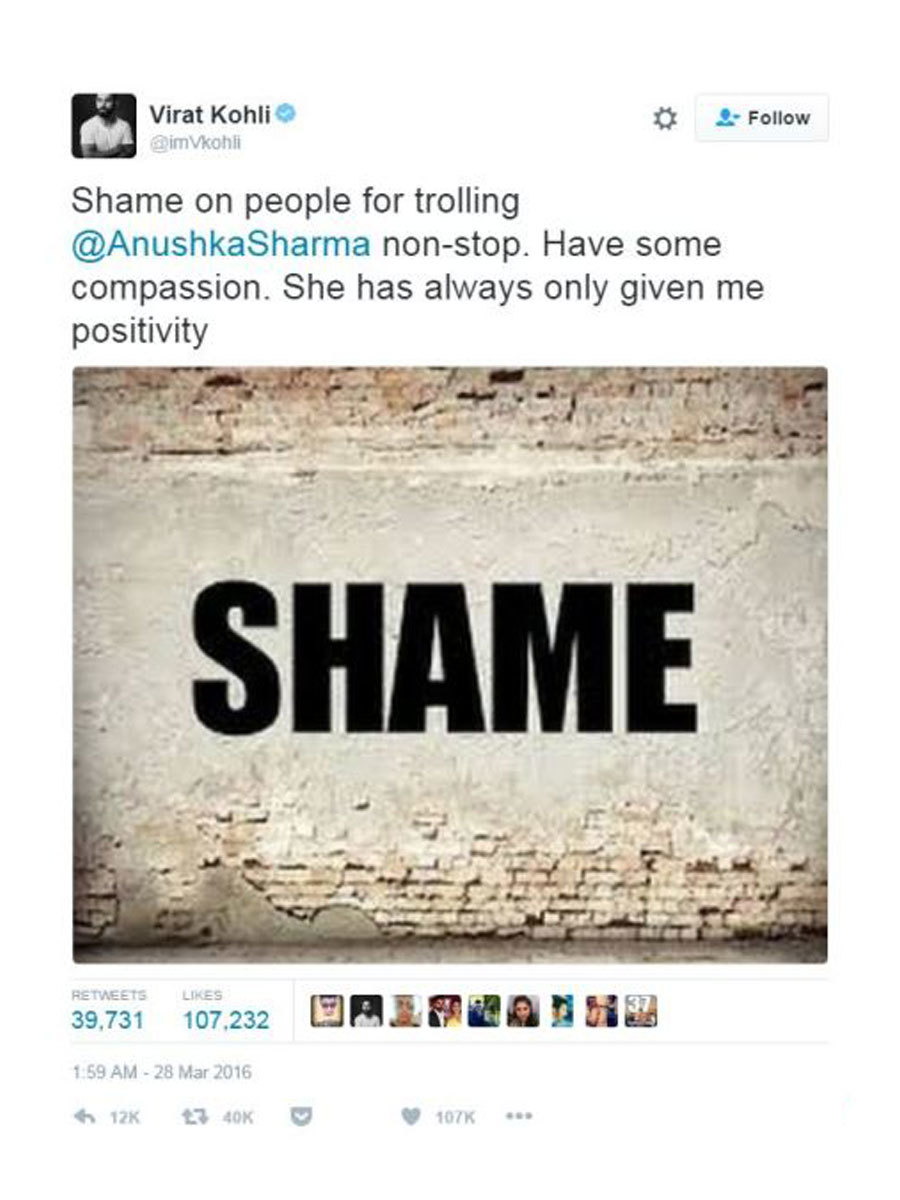 Their relationship rode at that storm, and plenty of others, and now they are married!  Yaaaaaaaaaaaaaaay!  Which is a very big deal, since it brings together the world of Hindi film and Cricket, two things the Indian public cares about deeply.  And which don’t necessarily overlap, that is, there is a segment that only cares about Hindi film and not Cricket (like me) and a segment that only cares about Cricket and not Hindi Film (like many people who would not be reading this blog).  And all of those people will be brought together by this couple, which is neat.  And not the first time these two worlds have been brought together!

Did you know Sachin Tendulkar and Aamir Khan are friends?  Or, more accurately, friends/fan?  Fan singular, because I don’t know how Sachin feels about Aamir as a Star, but I know Aamir is a huge fan of Sachin as a player.  He is constantly rumored to want to make a Sachin biopic, he postponed Dhoom 3 promotions so he could be at Sachin’s last match, and he claims he did PK because Sachin told him it would be a hit.

(Look at him, all star struck!  Also, I don’t follow cricket, is Sachin really short?  Because he looks about the same height as Aamir here, and I know Aamir is really short)

IPL, of course, is riddled with film connections.  It’s where entertainment meets sport!  Even more than before.  Oh, and also where sport meets scandal.  Even more than before.  The Chennai Super Kings got caught up in a match-fixing and impropriety scandal, which included Dara Singh’s son placing bets on behalf of a team owner.  Dara would be SHOCKED, I am sure.

Also caught up in the scandal, team owner and Shilpa Shetty’s husband, Raj Kundra.  Another film-cricket connection!  One of many once we start talking about team owners, considering Juhi and Shahrukh co-own the Kolkata Knight Riders, and Priety owns the Kings XI Punjab.  And then there’s the Ambani’s, who own the Mumbai Indians, and Reliance Studios, and the BIG Cinemas chain.

All of these star owners have helped turn IPL cricket seasons into just another kind of film season, with photos of people arriving at the games, big opening day performances, star feuds and friendships spilling out onto the field, and so on.  And, of course, it is the big source for Shahrukh Khan headlines every spring, whether it is him being adorable with his son, or being super angry around his daughter.

Finally, most importantly, Tiger Pataudi and Sharmila Tagore!  This is the last big big Cricket-film relationship.  Tiger Pataudi’s whole life sounds more like a movie than anything else.  And, like, a baaaaad movie.  Where people come out of it saying “that was so unrealistic!  How are we supposed to believe he watched his father die in a polo accident on his 11th birthday, making him the last king of Pataudi?”  And that’s just the start!  Then he goes to England for school, is recognized as a cricket prodigy, is the first Indian captain of the Oxford team, and is in car accident at age LOSING AN EYE!!!  Which slowed his cricket career down not at all (how is that even possible?  Doesn’t depth perception rely pretty heavily on having 2 working eyes?).  He became captain of the Indian team at 21, in the middle of a test series, after the previous captain was hit by a ball putting him in a coma for 6 days.  Oh, and Pataudi is still the youngest test captain in the history of India.  He also turned the Indian team around, making it a professional international level body, and played for India for 14 years.

More impressive than his cricket career (or at least, as impressive), is his personal life.  As in, he is the man who Sharmila Tagore married!  Sharmila is a great-niece of Rabindranath Tagore, Nobel Prize Winner and writer of India’s national anthem.  Hugely important family.  Sharmila herself became a film star at age 18 when she was cast in Kashmir Ki Kali, although her first film was an art picture for Satyajit Ray at age 13 (The World of Apu).  She continued to act for years, moving between the popular cinema and the art cinema.  And in 1969, she married Tiger Pataudi, and continued to work in film, while also taking time out to cheer him on in his cricket matches and having 3 children.  Oh, and by the way, Saif was born 8 and a half months after their wedding.  So Tiger may have had a little help in convincing her to settle down.

(Sharmila at 13 in her first film)

(Sharmila at 18 in her big break film)

(Sharmila at 24 at her wedding with Tiger)

Anushka and Virat should hope they can handle the pressure as well as Sharmila and Tiger did.  And be half as happy.  So far, it is looking good.  Their wedding photos are similarly smiley.  Anushka is planning to go straight into filming her next film right after the wedding parties finish in early January, looking like her career will continue without pause. And blowing her a kiss in the stands is almost (but not quite) as romantic as Tiger hitting 6ers to Sharmila when she came to his games.

16 thoughts on “A History of Cricketer and Movie Star Romances”