Here’s a random review!  Finally getting around to Lagaan.  Which is definitely NOT Aamir’s most important film, that would be Qayamat Se Qayamat Tak or 3 Idiots or something like that.  But it is the movie I feel like writing about right now, so why not?

This is a Hindi movie like no other.  That’s not a compliment, or an insult either, it is just a statement of fact.  There are no other Hindi movies like this.  If you (like many people in the world) watched Lagaan and thought “oh wow, I want to see more movies like this!” then you were going to be terribly disappointed.  Most problematic were the audience members who said “oh wow, this must be what Indian film is all like!” and then stopped there. 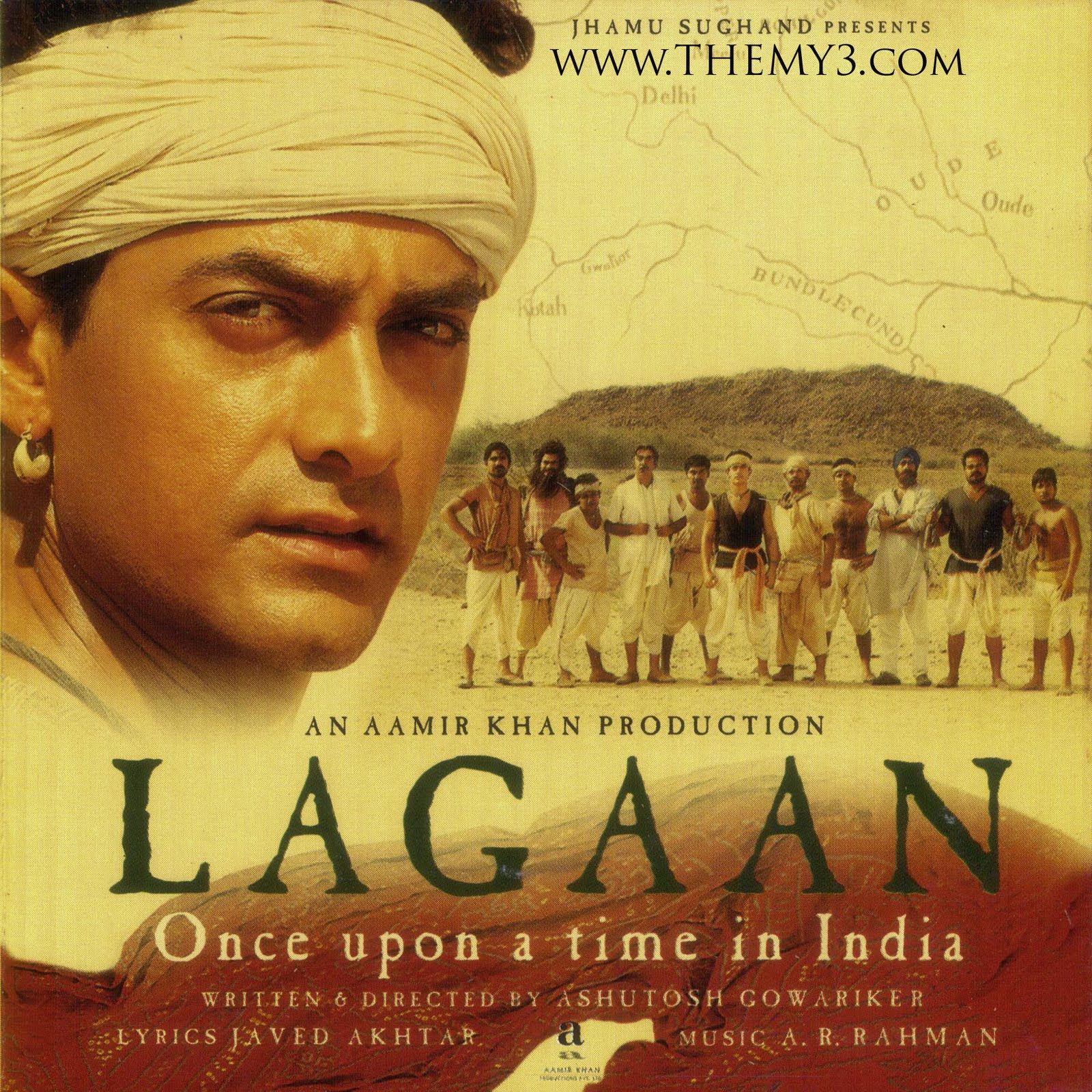 I’ve never read the “making of” book, or seen the documentary, but I know the broad outlines of the Lagaan “story”.  Ashutosh Gowariker was a former actor who had directed two films before this, Pehla Nasha with the 90s stalwart Dipak Tijori and Baazi, mostly remembered for featuring Aamir’s first fabulous drag performance.  Ashutosh was not blessed with great commercial success, but he was blessed with great connections.  As an actor, a decade earlier, he had roomed with Shahrukh while on a location shoot for the TV show Circus.  He had been in Aamir’s first movie with him, the forgotten film Holi.

Ashutosh was in the peculiar position of being able to get a meeting with the top stars in the industry, but not necessarily being able to sell them on the script he brought.  Usually it goes the other way around, the script is brilliant but you can’t get the meeting.  Ashutosh went to Shahrukh first, and was politely turned down, so he spun around and headed for Aamir.

I can see why Shahrukh turned the film down.  There is no audience for a film like Lagaan.  A period village story with lots of English dialogue and white characters, almost 4 hours long.  Village stories hadn’t worked in decades, period films almost never worked and when they did it was because they were huge epics, not slice of life dramas.  And the kind of audience that would appreciate English dialogue and white characters wouldn’t have the patience for an old school 4 hour film.  While the audience who would cheer in single-screens for 3 hours or more every week would probably not be okay with all the English and depth.

(Yes yes, I know it was inspired by Naya Daur and Junoon and other films that were set in villages or dealt with Anglo-Indian relationships.  But that particular combination of village, Anglo-Indian, Cricket, that was unique and a pretty hard sell)

The key to this film being made was Aamir realizing that no audience existed for this film, but he could create that audience.  He accepted the film, founded a movie studio to produce it when no one else wanted to touch it, and brought together an all star behind the scenes team. Amitabh Bachchan as narrator, AR Rahman as composer, Bhanu Athiaya (India’s only Oscar winner at the time) as costume designer, every thing perfect.  And onscreen, there was only Aamir.  Surrounded by an excellent talented cast of more or less unknown actors.

All of this helped to “solve” the problems of the film.  Unlike other period films, it didn’t feel like modern familiar movie stars in period costumes, it felt like Aamir Khan disappearing into a character, surrounded be people who appeared to have been born fully grown in this setting, who had never existed anywhere besides this colonial era village.

The perfection of the other elements helped to further ease the audience into this world, the costumes and the sets and the Amitabh narration and catchy and yet perfectly in character and in period songs, it all came together into a world that drew you in and made you forget that this wasn’t the sort of movie you were used to watching, whether that was because you were a Westerner not used to long movies with songs in the middle, or you were a desi not used to historic dramas with English dialogue.

One way in which the film is different from other Indian movies is that it has surprisingly little plot in its plot.  There aren’t a lot of TWIST moments, it’s more just a series of small steps all in the same direction.  Aamir Khan is a village boy, Gracy Singh is the village girl with a crush on him, Kulbhushan Kharbanda is the Raja of their Village.  Paul Blackthorne is the evil leader of the cantonment near the village, and Rachel Shelley is his sister.  Aamir and the other villagers go to Kulbhushan to ask for relief on their tax burden because of the drought, and Paul Blackthorne needles Aamir into instead agreeing to playing a Cricket match for tax relief, or else they will pay double taxes if they lose.  Aamir inspires the other villages to join his Cricket team, Rachel Shelley offers to coach and teach the game, Gracy Singh gets jealous of Aamir’s closeness with Rachel and Rachel begins to fall in love with him.  In the end, they win the Cricket match, Aamir picks Gracy, and Rachel and Paul go back to England forever.

Here’s something that I don’t think I’ve heard talked about before with this movie, and was one of the things that stood out for me when I first watched it long long long ago: the love triangle is very unusual, because half the characters never realize they are in it.  Gracy Singh is jealous and (correctly) afraid that Rachel Shelley is in love with Aamir.  Rachel Shelley is falling in love with Aamir and dreamily assumes he will feel the same way about her, and totally blind to Gracy’s existance.  And meanwhile Aamir, after being teasing and difficult for most of the film, finally reveals that he has been in love with Gracy all along and didn’t even think of Rachel.

The only other love triangle I can think of like this is from another Aamir movie, Rangeela.  In that one, Aamir was the one tortured by jealousy, Jackie Shroff was unaware that he had a rival, and Urmila was the one who was always obviously (to her) in love with one man to the point that it never occurred to her the other man might have learned to care about her as well.  And the other similarity with Lagaan is that both films used the love triangle to explore class and power, the leg of the triangle with the most power is blind to the reality of the lower class other legs.

In this, Rachel Shelley fantasizes about the pure Indian villager, watches him dance as Krishna and is excited by his handsomeness and perfection, and doesn’t even see the woman dancing with him as Radha, the perfect couple right in front of her.  She is blind both to Aamir’s disinterested politeness to her, and Gracy Singh’s very existence.  She just forces the world into being what she expects it to be.

Meanwhile, Aamir does not even consider Rachel not because he doesn’t think he is “good enough” for her, or because he thinks he is too good for her, but simply because he had already made his decision long before he even met Rachel, he was control of his own life and never thought that his life could be effected by someone else.  Nor should it have been!  He was in love with the girl next door, and working on a slow long term plan to make their romance unfold, it doesn’t matter if some other woman fell in love with him, he still had the right to create the romance he wanted, the romance that would be happiest for himself and the woman he loved.

I wish the 4th leg of the triangle (so, the pyramid) had gotten a slightly larger role, because that’s where the statement gets really interesting.  The woodcutter who is in love with Gracy agrees to be a double agent for the British after having his heart broken seeing her feelings for Aamir.  But, eventually, he realizes the error of his ways and returns to the team to play for them honestly.

While Rachel was going to Aamir and Gracy from a higher level, assuming she would get everything she wanted and blind to their own agency, Yashpal Sharma is coming from below, aware of Gracy’s feelings for Aamir and not exactly surprised when she picks him.  But that doesn’t mean there isn’t a danger, his bitterness and sense of injustice and powerlessness turns toxic. Until it is cured by realizing that Gracy and Aamir falling in love is nothing to do with him, and that there is a higher structure of power he needs to overthrow.

At least, I think that’s what his story is.  It’s a little abbreviated because we need the NEVER ENDING CRICKET MATCH instead of more character scenes.  Really, besides Aamir and Gracy and Rachel, there are surprisingly little character moments.  At least, deep moments.  Instead, each character on the team gets a simple identification and character moment and then continues in the background for the rest of the film.  The Sikh ex-military, the untouchable, and so on and so on.

Really, it is just the strangest film!  Almost no plot, way too many characters with way too little backstories, a Cricket match that is played essentially run by run.  On top of the village setting, the historical time period, all the other odd things.  But somehow it works, the setting feels right, the characters we care about manage to carry all the others we don’t really know, the songs and the beauty of the visuals lose you in the story and you forget that it makes no sense.

It’s not surprising that there is no other film quite like this one.  I don’t think there could be, not with this mixture of Indian village stories and crossover Anglo-Indian drama, and Cricket.  But there is this one remarkable and remarkably odd film.