Datablue sent a link to an old interview of Sunil in a comment on the Sanjay posts, and it was so good that I decided it was worth a little mini-post to share it with you all.

Here is the actual video:

I know you may not be able to watch it at work, or it may be banned in your country, or you just may not have 10 minutes to spend watching.  So I will summarize what he says for you.

Sunil explains that he grew up in the country raised by his widowed mother.  He always respected her and how hard she worked and dreamed someday of marrying a strong good woman like her.  Years later, he was living in Bombay in a little studio apartment with his sister and her two children.  His sister had a growth on her neck, a cyst, but they didn’t know that at the time.  It could have been a cancerous tumor, Sunil didn’t know what would be best to do for her and he was scared.

At the same time, he was working on Mother India with Nargis.  She used to joke with him a lot on set, called him “Biju” (his character’s name in the movie), but they weren’t that close.  And one day she said “Biju, why do you look so worried?” and it all came out.  He explained that his sister was sick, he only had the one sister and couldn’t lose her, she had two small children, he didn’t know what to do, he didn’t know any doctors, he didn’t know what would happen.  Nargis told him that he shouldn’t worry, they could do a lot these days, his sister would be fine, and he felt better.  After work, he went out with a friend, and came home in the late evening to find his sister looking all happier, telling him that she went to see a doctor and she would go back to the hospital the next day for an operation.  Sunil was stunned, asked who arranged all this, she said “Nargisji!”

Nargis, without giving Sunil even a hint that she would do this, had left work and gone to his house.  She had taken his sister to a doctor and arranged for the operation.  Not only that, while his sister was recovering, she took his small niece into her house for 3 days to take care of her.  All just for a co-worker, not even a close friend.  And all without asking for thanks or making a fuss.  And Sunil thought, “If only I could marry a woman like that!”

So for days he waited for his chance and built up his courage.  Until finally one day he talked to her driver, who had been driving for her since she was a little girl, and said he would take her home from set that day.  And then he offered her a ride in his little fiat and suddenly burst out as he drove her home, “I want to marry you”.  And she didn’t say anything at all.  He drove her home, she got out of the car, and that was it.  He didn’t go to work for two days, he planned that he would finish this film and then leave town, go back to his village and farm.  He assumed she not only had rejected him, but would tell everyone else in the industry about his presumption and he would be laughed out of Bombay.  Finally he went back to work, and then came home to find his sister waiting for him and saying “You’ve been keeping secrets!  Nargis came by today, I had no idea you were marrying her”.  And that’s how he found out that she said “yes” after all.

Just for a bonus (so this post isn’t merely a repetition of what is in the video), can we imagine Nargis’ side of this?  A nice young man from a good family, one she is already on joking terms with, tells her that he is worried sick about his sister. Sunil didn’t see this as anything special, but it is special, for a struggling young actor to also be supporting his sister and her children, and to see that as a blessing he is terrified of losing (“I only have one sister”) instead of a burden.

And then for that same young man, unlike her long term boyfriend stupid Raj who never even hinted at it, to suddenly leap to proposing marriage within a few days.  To not be scared off by her fame, her well-known scandalous past, her wealth, even her age (Nargis was nearing 30, over the hill according to Indian society) but to just want to marry her.  Oh, and this same young man is of course very handsome and tall and intelligent and all those other good things. 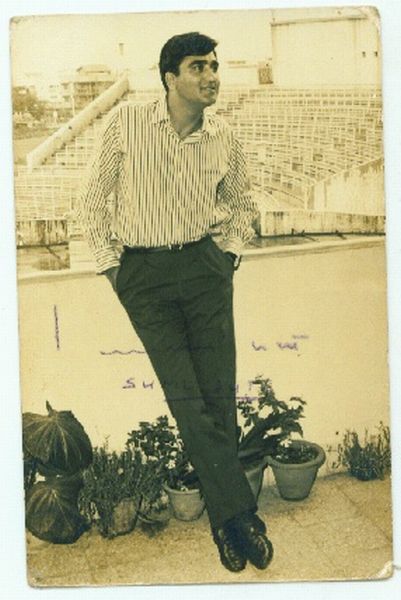 I can imagine Nargis being too shocked and surprised to respond, and then spending the next few days thinking all of this over, while Sunil was panicking and plan to flee the city, and then finally just going to his home and talking to his sister to start planning the wedding.  I also like to imagine that Nargis must have gotten quite a good idea of just how wonderful Sunil was from his sister, over the days of taking care of her while she was sick.  In my experience, sister’s never say anything good about a brother to his face, but tell the world that he is the best man in the world when he is out of the room.

15 thoughts on “Sanjay Dutt Bonus Post: How Sunil and Nargis Fell In Love”