Did anyone notice I missed last week?  This was supposed to go up on Thursday, and then it got overwhelmed by Section 377 celebrations so I bumped it to today.  And next week I am skipping again, sort of, because there will be the Kabali Rerun (watch it before Tuesday so you can join the discussion!).

This is not a great movie.  It’s barely even a good movie.  It is a watchable movie, however.  Extremely watchable and pleasant.  Nothing wrong with that.  A nice way to kill two hours, and to build up your “mental images of Siddharth in glasses and a tie” bank.  Just in case you feel the need for more Siddharth mental images. 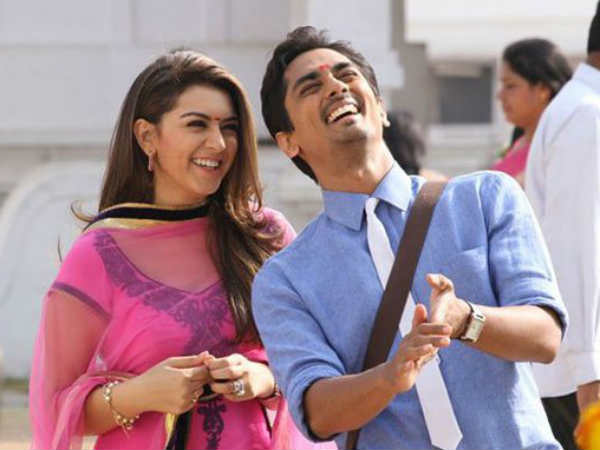 This is kind of the love story version of my favorite kind of Telugu action movies, the ones where the ending is a forgone conclusion (right will triumph, hero will win, and so on and so on), but the fun of it is seeing what happens along the way.  The little clever plans the hero comes up with, and the little clever twists and jokes the director comes up with.  In this movie, we know that the hero and heroine are going to end up together, this will be love triumphant, the fun of it is watching the journey and the little twists on the usual plot and nods to the usual romance.

That’s the good side.  Then there’s the bad side, starting with our heroine.  I was all set not to like Brahmanandran in this, because at least half the time he is completely unfunny to those who cannot speak Telugu.  But no, he was fine.  Not laugh-out-loud funny, but fine.  It was Hansika Motwani who killed me.  I kept wanting her to be Kajal Aggarwal.  Who isn’t the greatest actress either, but is perfect in this kind of rom-com heroine role.  But no, it was Hansika.  Hansika the Blah.  She just couldn’t quite hold up her end of the romance, leaving poor Siddharth to do all the work for her.

(She’s not terrible in the songs, but she could be better even there)

Also on the bad side of things is the meandering plot.  I like a movie that takes some interesting turns along the way, I don’t like a movie that feels like it doesn’t even know what that way is.  And there is definitely too much Brahmanandran.  He isn’t bad, but I didn’t need quite that much of him.

I love the opening of this film.  It establishes the happy upside down world it exists in.  Our hero, Siddharth, comes from a family in which everyone marries for love.  He is a rebel by refusing to fall in love, even though his relatives keep urging him to fall in love and elope.  Not only that, his two older sisters are already married, and their husbands live with them in the family home.  His oldest brother-in-law is a happy fussy househusband, worrying over his younger brother-in-law and wanting him to be happy.  His next older brother-in-law is a friend to him.

This is not so much a commentary on Indian society (although it is that as well) as a commentary on the perfect Indian family as shown on film.  Instead of a doting older sister-in-law, it is a brother-in-law.  Instead of the family forbidding love and encouraging an arranged marriage or focusing on work, they are encouraging love.  Everything is already a little upside down.  And it becomes even more upside down at Siddharth’s office, one of those new tech firms but just a little bit off. Siddharth is in his glasses and tie, there are the cubicles and glass walls and mixed gender office I am used to in these scenes, and yet it is all just a little bit too much.  The female workers practically faint when the office hero (not Siddharth) arrives.  And a new female worker being hired results in massive excitement and singing through the office.  Again, it is partly a commentary on this new kind of work environment, but also a commentary on how it is usually shown in films.

The new worker is of course Hansika.  And of course Siddharth falls in love with her at first sight.  And of course he is too shy to talk to her.  Even the film is bored with this part, skipping through it as fast as possible.  Until Siddharth is saved by a suggestion of consulting an expert, love guru Brahmanandran.

As is always done in the best versions of these plots, Brahmanandran is established as only helping men who are sincerely in love, and in only helping them to make that first step.  There’s no ugly lying and false seductions, it’s just carefully arranged meet-cutes that bring out the boy’s personality in the best possible way.  For Siddharth, it is a matter of giving him the confidence to know he can talk to a girl without messing it up.  Soon, Hansika is interested in him.  We see the “evil” flipside of this when Siddharth’s sister is wooed by the sleazy office romeo, using techniques stolen from Brahmanandran by one of his flunkies.  This romeo didn’t need confidence and probably does not have honorable intentions, and Siddharth is rightfully furious with him.

But there is a roadblock, Ganesh Venkatraman, the office hero, who is also interested in Hansika.  This should be the most interesting part of the film, because this is when we start to get a clue of how Hansika is feeling.  Here is this objectively perfect guy, and yet she can’t make herself interested in him.  She talks it over with her roommates, giving us a rare glimpse of the female side of romance.  And if she was played by Kajal, or Samantha, or any number of other actresses, this would turn into another light and bubbly upside down world scene in which a girl is reluctantly persuaded to fall in love because of social pressure, even though what she really wants is to focus on her job.  But, it’s Hansika, so no luck.

(See?  No idea what she is feeling)

But what does land, because it is so perfectly written it can’t fully be destroyed, is the moment when Hansika breaks it off with Ganesh.  Siddharth has been planting false clues that Ganesh is a womanizer, a condom pack hidden in his car and so on. Meanwhile Ganesh has been the perfect boyfriend, up to and including inviting Hansika to meet his family.  But finally the clues build up until Hansika feels she has to do something and breaks it off with him.  And then leaves, and breaths a deep sigh of relief.  I can picture it in the stage direction “breathes sigh of relief”.  Even Hansika can manage that.  And it is such a great moment!

You see, Siddharth wasn’t breaking up true love, he was just giving her the outs if she wanted them.  She didn’t care enough to ask for an explanation, to fight about it, and certainly not to cry over it.  Instead it was merely a moment of relief and freedom.  Siddharth was helping her get out of a love she didn’t want, doing a good thing not a bad thing.  And if it weren’t clear enough, we get a similar fight between them later in the film and see Hansika cry and cry and break her heart over it.

It’s not about what is done, it is about how people feel about it. So Siddharth can give Hansika rides and talk to her and finally offer a proposal to her father, all the same things in broad strokes that Ganesh did.  But because he truly loves her and Hansika truly loves him back, it hurts so much more when it doesn’t work.

Siddharth and Brahmanandran try a lot of little tricks, and they work.  Siddharth and Hansika are on the brink of an engagement.  Until it all comes falling down when Brahmanandran sees Hansika and realizes she is his beloved little niece.  Another gag that even Hansika can’t ruin, putting this clearly grown woman in a school uniform and braids, having Brahmanandran fuss over her with sentimental faces, brushing and braiding her hair and so on, the sentimental childhood flashback made ridiculous.

And now a new plot begins.  Siddharth versus Brahmanandran, only Siddharth doesn’t know what the game is.  Brahmanandran tries to track him, including at a brothel, and Siddharth neatly and unconsciously avoids harm.  A less fun movie would have made Siddharth aware of what was happening.  But it is so much more entertaining this way, with him being completely innocent.

Which makes the final gag, that he isn’t quite so innocent after all, the most satisfying.  Hansika finds out that Siddharth is working with her sleazy uncle and is furious with the both of them.  And legitimately heartbroken, as mentioned above.  The true coin of love is shown by how Hansika reacts to it.  Siddharth follows her to the airport in the traditional last attempt to declare love, and it doesn’t work.  Meanwhile, Brahmanandran has been converted to their love story after visiting Siddharth’s household and seeing the ridiculous amount of love held for Hansika there, complete with t-shirts with her photo on it (another tweaking of the usual moment when the hero’s family accepts the heroine, but so much more over the top as to make it laughable and make us look back in laughter at those other versions).  Brahmanandran, in a last desperate attempt to save their love story, runs Siddharth down with his car.  Hansika, as expected, rushes to his side and all is forgiven as she realizes her true love for him.  But only later, after all has been settled and Brahmanandran and Siddharth are left alone in the hospital with Hansika and the rest of the family gone, does Siddharth reveal that was his plan too!  His brothers-in-law were sitting in a car ready to hit him when Brahmanandran did it for them.  The innocent has become the player.

25 thoughts on “Tuesday Telugu: Something Something, A Pleasant Farce with a Bad Heroine”