Fun movie!  Surprisingly fun movie, especially after all the misery that was Badlapur.  We are back to the lighthearted Johnny Gaddar version of Sriram Raghavan.  Definitely recommend it if you want something fun with a great cast.

Tabu is amazing.  Ayushmann is the hero, but Tabu is the one you want to watch.  And Sriram gives us lots of chances to watch her in lots of different situations.  That’s all this movie is, a series of situations with characters in them.  There is no plot, no straight narrative with one central conflict, it is all little situations that resolve and then lead to another. 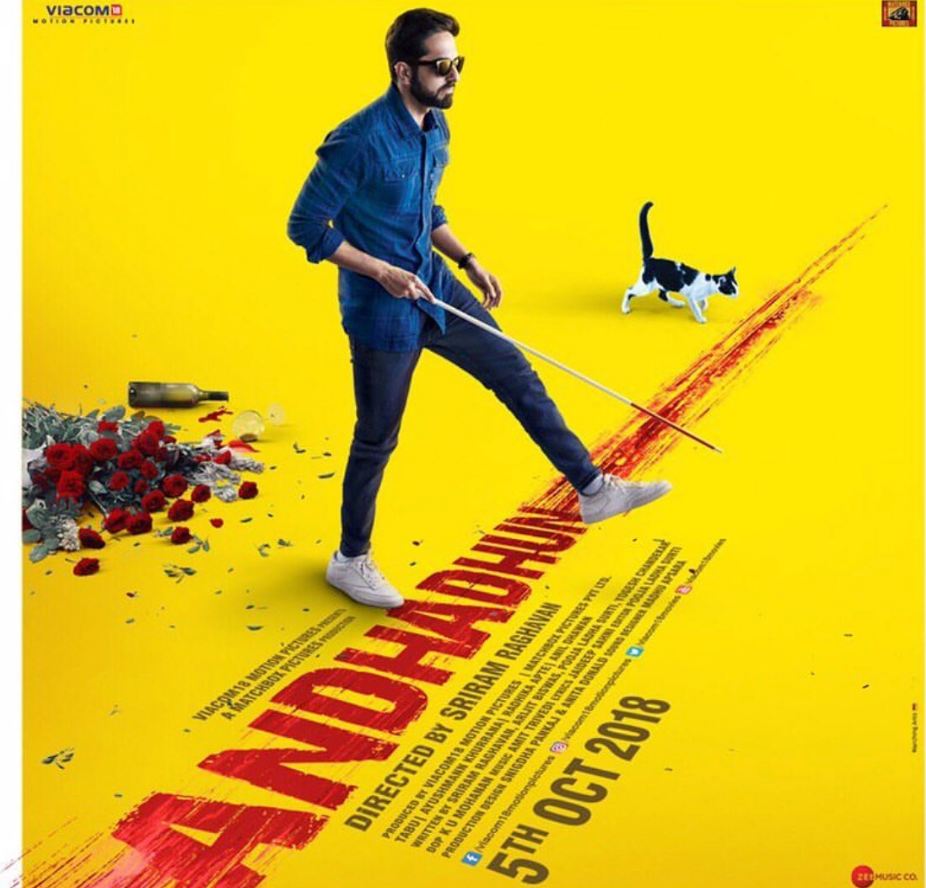 That’s what a lot of classic film noirs are, little set pieces loosely connected.  It’s a genre that started in an effort to pursue cheapness, the very name “noir” refers to the lowlighting used to hide cheap sets and save money on lights.  And so films that were thrown together with scripts written on the fly and any old actor slotted in to any old part had all those imperfections hidden by clever lines, memorable characters, and surprising characters.  And, eventually, that became an art in itself, a film that purposefully sets any central plot aside in order to create an enjoyable ride for the audience.

It’s a genre born in America but quickly carried over into India.  Films like Jewel thief, Teesri Manzil, Howrah Bridge, they all follow the noir tradition.  You can remember moments, Helen seducing Dev Anand or Shammi confessing to Asha Parakh, but you can’t remember the details of the plot, how this clue led to that clue and so on.  It’s about the little surprise of the moments in the film, the sexy scenes and the jokes and the cool one liners.  It’s a genre that rises or falls on a light touch and a clever eye.

(I’ve seen Jewel Thief at least 3 times and I have no memory of who Helen is or why Dev Anand is here to watch her.  I do remember her tights)

That is why, for me, Badlapur failed as a noir.  I don’t think it was even trying for a noir, I think it was trying something else, a theme piece, an emotional statement.  But this movie, this movie is going straight for noir, light and with few themes or deeper meanings, just something there to move fast and keep you surprised and amused.  That is why, despite this very dark plot, the audience I was in spent most of the film laughing, not sad or tense.

A large part of this is that we don’t really care, not really, about any of the characters.  We can watch them get into trouble and enjoy their cleverness and struggles to get out of the situation, without feeling stressed about the outcome.  Either way, we will be amused, who lives and dies doesn’t matter much to us.  The whole world exists in shades of black.

That’s one thing that is not traditional in an Indian noir.  Even in a noir, Indian film tends to have a true hero, someone that the audience has faith in setting everything right.  And a true emotional appeal, true love or justice or friendship, something that matters.  But in this film, there is none of that.

There are still songs, very appropriate well-written songs.  Amit Trivedi has impressed me again, creating a score unlike anything he has done before and perfectly calculated for this particular film and these particular characters.  It is piano heavy (of course) but varies from light bar music to classical to band arrangements.  There are even song moments, little montages and breaks from the plot, used to help build up a mood and prepare us for the next surprise.

But otherwise, it is very non-Indian.  Ayushmann is the protagonist, but he isn’t really a hero.  Radhike Apte is the love interest, but it doesn’t quite feel like true love.  Tabu is the villain, but a villain who you can’t completely hate.  There is no propulsive emotional interest in how it will end.

Which means the film keeps you watching not because you have to solve the mystery or learn what happened, but simply because you are enjoying seeing what these people will get up to next.  Mostly Tabu.