It had to start late, because I didn’t want him to share with Aamir.  But now the decks are cleared, Dangal is out, so I can focus on the birthday boy!  I’ll be repurposing my 50 reasons to love him post from last year, updating and polishing and of course adding a reason 51.  But I also wanted to post a couple of bonus “best of” posts.  I haven’t seen everything he’s done, so this is just “best of” what I have seen, not all time.  Feel free to mention anything I might have missed in the comments!

I figured we might as well start at the top, right?  And so, best hair!  And I am going in chronological order, because that is also in order of worst to best.  I think we can all agree that Maine Pyar Kiya was the best, right?

In more recent years, I really liked his Sultan look.  Not the flashback look (although at least one friend I went with really really liked it), but the modern day one.  I thought the sort of half beard and almost shaved head really highlighted his eyes and made his face have more, I don’t know, character?  Weight?  Maturity?

Counting back from Sultan, hmmm.  I liked Bajrangi Bhaijaan a lot, and Prem Ratan Dhan Payo, but the looks didn’t really work for me.  The beard in Kick did not work AT ALL for me.  Back back back in time…oh!  Dabangg!  1 and 2. That’s a nice mustache, in his Koffee appearance his brothers were just talking about how he picked it out himself, tried on a whole series of mustaches and was resisting the idea, and then picked up this one and agreed.  Because it looks really good!  But it’s not just the mustache, the hair is nice too, kind of traditional and restrained like you would expect from a cop, but also with a little touch of style to it so you know his character can break the rules.

Going back from there, a bunch of boring-hair movies where it was always kind of the same.  And Veer and Wanted, which are just NO!!!!

Partner is a good representative of that era of hair.  Kind of like Dabangg, but a little less restrained and without the mustache.  Shorter, a tiny little side burn.

Okay, I can’t do a hair post and ignore Tere Naam.  I hated this hair when I had just seen the songs, but now that I have seen the whole movie, I kind of love it!  Mostly because of how it works with Salman’s character.  It’s exactly the kind of “trying to be cool” hair that a young man would wear.  And the way he plays with it and pulls it in front of his face and then tosses it back does a fantastic job of conveying how the character is feeling.  By the end of the film, I was really disappointed when he cut it!

Now, I’m not sure exactly when it shifted, but at least back in Hum Saath Saath Hain times, Salman’s hair was the same as in that Partner cut but slightly more, shall we say “foofy”?  It looked a little more like it would feel all soft and fuzzy if one were to pat the top of his head.  I like it! 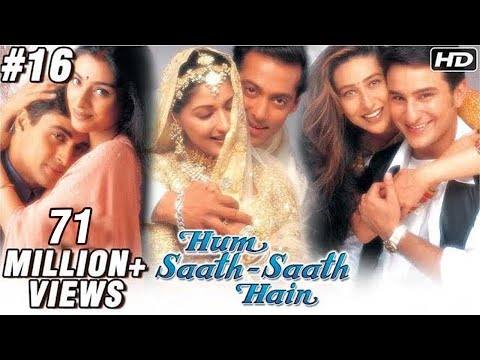 And then we start moving back to the floppy years.  Which, so far as I am concerned, are the best years!  I like his boyish bangs falling over his forehead.  Of course, it would look ridiculous if he wore it like that now, he’s way too old to pull it off, but I do like it back in the day.  For instance, when he was all artistic and soulful and happiness bringing in Khamoshi.

I’m skipping Andaz Apna Apna and Saajan, because mullets are never good, and going all the way back to Baaghi.  Now, this is HAIR!  Gaze at the magnificence!!!!

And, of course, the greatest he has ever looked all around, including hair, is Maine Pyar Kya.  So full!  So wavy!  So dark!  So out of control!