Amrita Singh!  She has such a fascinating life story that I can’t resist writing about her.  And it’s her birthday, so why not?

1.1. I love you because you are a Delhi-ite, which is a unique kind of “outsider” in Indian film, a very good old Delhi family, but still not someone who went to the Bombay schools with everyone else.

2. I love you because you are one of Shahrukh Khan’s oldest friends, possibly his very oldest friend, his playmate as a child and the daughter of one of his mother’s closest friends, and it is so odd that they both ended up movie stars!

3. I love you because you made your debut at 25, old for an actress, and became a star almost immediately.

4. I love you because you had smoking hot chemistry with Sunny in your first film!

5.  I love you because you did this cute song with your childhood playmate in one of his first movies.

6. I love you because you completely committed to the “evil” role in Aaina.

7. I love you for being 33, going on one date with a hot young 21 year old prince, and having him fall so passionately in love with you that he moves into your house that night and never leaves. 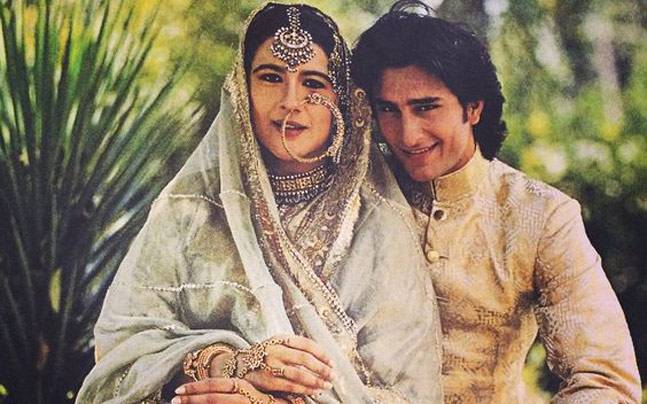 8. I love you for retiring at the peak of your career, because you wanted to have kids with your hot young husband instead of acting.

9. And I really love you for coming back to acting post divorce with barely a step missed, turning villain in a soap opera followed by a serious of wonderful older woman roles that aren’t quite the usual mother parts.

10. I love you for stealing A Flying Jatt from Tiger Shroff (not that it’s hard to steal a movie from Tiger, but it should be acknowledged)

11.  And you stole Aurangzeb from Arjun Kapoor, Anupam Kher, Prithviraj, Rishi Kapoor, and even Jackie Shroff.

12.  And finally, you were the complicated heart and soul of 2 States, elevating it from an over-wrought young people romance to something a lot deeper.

Bonus reason I love you: THIS SONG!!!!

12 thoughts on “Happy Birthday Amrita Singh! A Dozen Reasons I Love You!”