Well, I saw it!  And I did NOT like it.  And then I went home to discover that Dog Hazel had gotten lonely and into the trash and eaten a bunch of stuff she shouldn’t.  So all around, a failure of an evening.

Like Sanju, a big question with this movie is how to structure it to tell a story that has already been told so many times in a fresh way, and to tell a story that involves real people who are still alive without offending them.  This film went the Citizen Kane route, cutting between modern reporters trying to solve a mystery revolving around the heroine’s last words (this time, it is NOT a sled/creepy nickname for their mistress’ private parts), and flashbacks showing the events.  And added a touch, the importance of the story is shown through the effect it has on the reporters learning about it.

(Notice that Samantha, our modern day reporter, is the largest figure on the poster.  And then Vijay, and then Dulquer, playing Gemini.  And then Savitri.  Gives you a sense of the respective depth of their characters)

It’s good that it added the effect on the reporters part of it, because it fails in the really clever part of the Citizen Kane structure, making you care about the people telling the present day story to the reporters, and making you feel the weight of how the person they are talking about was a different person to each of them.  The emotional center of Citizen Kane is between Joseph Cotton and Welles, and it carries through to the present day, seeing old man Joseph Cotton talk about their past together and feeling his ever present sadness over how it ended.

It also fails in elevating the central story into anything more than the same melodramatic over the top soapy woman’s picture that these female biopics always tend to turn into.  The ingredients are there for something more, there are small moments showing “Savitri” as a great actress, her natural taste for the stage, for mimicry, and so on.  But they are swamped in the same old tired “She just wanted love!!!!!” and “she lead from her heart and had no brain” stuff that always happens when a strong woman is shown onscreen.  Guess what, it’s all because she wanted a father’s love!  Just like the fan magazines said about Lana Turner back in the 1950s.  Because absolutely anything a woman may do, especially a powerful independent woman, is about her father.  Or her husband.  Or her husband-who-replaces-her-father.  That last one is most likely.

This also means you come out of this movie going “Boy, you know who was the break out actor for this film?  GEMINI!”  Keerthy Suresh may be getting accolades now, but it is pretty clear to me (and I assume to casting directors) that she did a good job in a very particular role with very clear directions.  She was always playing larger than life, which is a lot easier than playing a life sized character.  Meanwhile, Dulquer got all the juicy stuff.  Charming, conflicted, romantic, sad, responsible, and on and on and on.  This is the big launch for him, the film that could make him stand out.  MAN that guy is ambitious!!!!!  Sneaking into Tamil, now Telugu, and Hindi soon.  I keep waiting for him to flame out, for one of those industries to get sick of him and feel like he is playing too  many sides at once.

The sad thing is, Vijay Devarakonda does a much much better job in a much trickier part.  As does Samantha Ruth Prabhu versus Keerthy Suresh, but at least Samantha already has an established career so her performance won’t be a surprise to people or give her any more credit in the industry than she already had.  It was predictably good, while Vijay’s was unpredictably good.

Really, the two couples in this film are a perfect contrast in the challenges of playing a real life character versus creating one from the ground up.  Dulquer and Keerthy are getting accolades for acting because they mimiced and matched a known yardstick, this is what Gemini and Savitri looked and sounded like, this is their love story, it all makes sense.  But Samantha and Vijay are working with totally original characters, a female reporter who struggles with self-confidence and the shy photographer who is in love with her.  They have to make us believe in their story and care about it in a way that Dulquer and Keerthy don’t have to struggle to do.  And they succeed, without big romantic moments or dramatic scenes, just with small conversations, I cared far more about their romance than the epic decade spanning romance I was being sold for Dulquer and Keerthy. 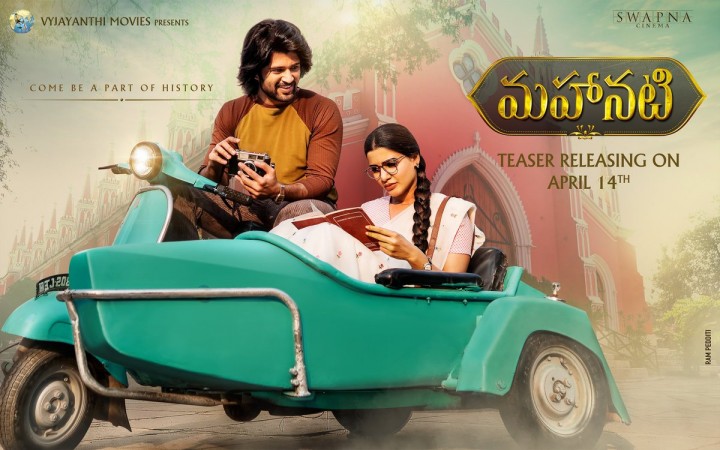 This film was an odd mix altogether of ambitious ideas and trite imagery.  There is the love song that has Dulquer and Keerthy floating to the moon, there is the clever subtle effect of 1980s film quality for the “modern day” sections (Red Chillies VFX color division, woot-woot!), that is inventive and interesting.  But then there is the same old “oh the wacky business of a major studio lot” kind of scenes, and street scenes and other period moments that feel kind of cheap and thrown together, and just generally every thing filmed in the most predictable and boring way possible!  It’s like a paint-by-numbers biopic, the dramatic confrontation with a child in front of alcohol bottles, the childhood freedom and joy, the magical moment of being discovered by a director, and on and on and on, it all just felt like something I had seen before.

Which is the real loss here.  Because Savatri’s life ISN’T something that had happened before, she’s not the same as all those sad women who gave it all up for love, she’s something else.  Her movie should tell an original story, not yet another story of “Stand By Your Man” crossed with “The One That Got Away”.

(That’s what this promo promised, singer and writer and director and popular in multiple languages and on and on.  We see NONE of that.  It’s all just “wah-wah, I’m in love and he hurt me”.)

Let me expand that.  No one’s life is the same as any other person’s.  This is my problem with most biopics, from Alan Turing to Abraham Lincoln.  It’s a flawed genre because the filmmaker always tries to create a narrative, and that narrative ends up fitting within a particular pattern of story telling, and suddenly the real person has been lost because of the parts of them that don’t fit.  And it feels unfaithful and insulting to the real person when you try to cut their life up into bits in order to make it fit within the story you want to tell.

In this case, it is particularly insulting because the bits that were cut up and cut out are real people.  Pushpavalli and her children are mentioned once and then ignored.  No, wait, Pushpavalli is mentioned once, her children do not exist at all.  Savitri’s sister also does not exist.  And many ways, Savitri herself does not exist. Savitri the mother, Savitri the director, Savitri the multilingual actress, it is all cut away in order to give us this one small fragment of a person, Savitri who loved Gemini.

(“Should we spend a lot of special effects money to recreate her experience as the first female director of an all female crew film?  Naaaaaah!!!!!  Let’s give that a tight 3 minutes, and blow all the money on a fantasy love song”)

5 thoughts on “Tuesday Telugu: Mahanati Review (No Spoilers), A Huge Talent Cut Down to Fit in a Love Story”