I am so tired.  Forgive the (even more than usual) typos I will be making, it’s very late.  But I have to get up early tomorrow and drive up to my parents, so I want to write the reviews tonight and be done with them.

This is a movie that isn’t quite sure which story it wants to tell, the rise of the humble Indian craftsman or the love story of a man and his wife.  The best parts are when the two stories come together, when we see how the promise of a new kind of industry allows for a greater closeness between husband and wife, instead of the treadmill of wage labor outside the home and constant work inside the home.  But then there are other parts that just don’t quite make sense, the love story skated past and rearranged in order to make sense for the economic story, or the economic story brushed through so we can enjoy the personal. 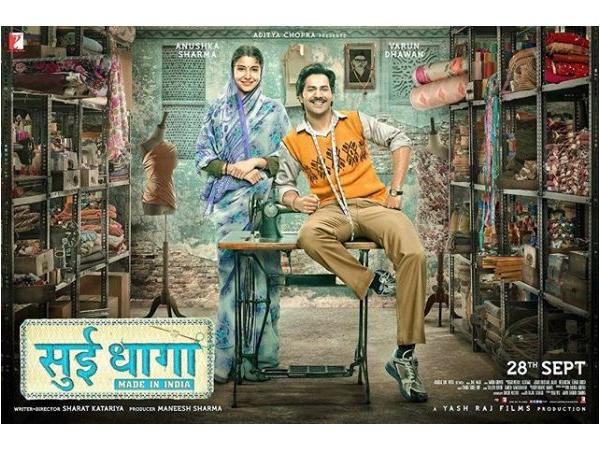 It’s a wobbly tale in some ways, but it is better put together than Shakat Katariya’s last film Dum Laage Ke Haisha.  That was a wonderful original film, a breath of fresh air, but it wobbled a bit at the end, didn’t know where it wanted to go or why.  This film wobbles in the same way, but much less.  The timeline is extremely rushed, things just sort of magically work out over a song, relationships healed and so on, and then the happy ending arrives with little connection to what went before.  And it adds on the nice soft social message that sells so well, makes you feel good for going to a movie instead of like you are wasting your time.

That’s important, because this is a Yash Raj film with Varun Dhawan and Anushka Sharma.  It sounds like the kind of big budget low imagination movie that the discerning audience would avoid, so you want to lean heavily on anything high minded.  But on the other hand, you do want to make money so you also need to make sure it is a little bit entertaining.  This is the perfect in between, soft social message, a little humor, a little romance, a few songs.

What would have completely destroyed this film is if Varun couldn’t sell his role.  Anushka was more of a sure bet, she is a far more experienced actor than Varun for one thing, and for another the village wife type is something she has done before.  But Varun was trying something very different, a poor village type boy living on the outskirts of Delhi.  He’d done the Bihari accent and all that for Badrinath, but that was as the spoiled son of a rich man.  This is different.  And he handled it perfectly.  Comfortable, happy, smiling young man, with the exuberance of youth, but also the awareness of the many worries and problems of his situation.  And nice, that’s the biggest thing you see about him, always nice.  He helps carry buckets of water around the home, he takes care of his mother, he wants to get to know his wife, he is a nice nice man.  Late in the film Anushka has a speech singing praises of him, and that is what she talks about.  Not brilliance, not talent, but that he is the kind of man who will pass up the bus and ride his bike instead in order to save money to buy his father paan.  And we believe that Varun is that man, at least I believed it.  He isn’t cocky, he isn’t proud, he isn’t demanding, he is just a nice quiet little man who dreams of a nice quiet little life.

The rest of the cast is very good as well, Varun’s mother and father especially, Raghubir Yadav and Yamini Das.  But they aren’t big names, which is appropriate.  This is a movie about two people, Varun and Anushka, and it is right that everyone else kind of fades into the background behind them, we don’t want a big array of co-stars and characters, we just want to see them and who they are together.

That’s where the economics and love story meet.  It is only when needle and thread, man and wife, can come together that the country can flourish.  The corporations, the entrenched powers, they seek to divide.  It is the groups together that are the greatest strength of the country and of the family relationships.

2 thoughts on “Sui Dhaaga Review (No Spoilers): Love and Economics”