I did it!  I managed to write a Monday Malayalam post after all!  I am The Master!!!!!  Now we have to see if I manage to write a box office post tomorrow or if that is just too much.

I’m glad I didn’t decide to watch this movie in advance and promote it.  Because I think the readers here who aren’t routine Malayalam viewers might not enjoy it.  And the people who are, have probably already seen it.  It fits in that gap of a movie that has the particular Malayalam wandering way of approaching a topic, but doesn’t have the most original content to draw in non-Malayalam viewers.

In terms of filmmaking, it definitely isn’t revolutionary.  I know Ranjith is a brilliant screenwriter turned director, and that is how he directs.  There are touches like a fade from a dream scene to reality that are original in concept, but then the execution just sags.  Everything is filmed in bright TV soap style lighting, no subtlety in the use of light or shadow.  The camera movements cross the line from unsubtle to just plain bad, confusing movements through space that make me lose track of where people are and what is happening.  And it all adds up to moments that should have been touching and simple becoming trite and heavy handed.

Not that this completely ruins the movie.  The basic story is quite good, an interesting way of looking at addiction problems from a variety of angles.  And the performances are excellent, especially Mohanlal’s.  It just isn’t quite as good as it could be.

Mohanlal is a functioning alcoholic, and a famous author.  He starts the day with drink, writes, does an episode of his TV show that involves aggressive confrontation of the guest with evidence that reveals his lies, goes home and drinks some more with his neighbor friend Madhu, and then goes to bed.  His wife left him 7 years ago, taking their son.  She is now married again to Shankar Ramakrishnan who acts as a co-parent while Mohanlal drifts in and out of his son’s life.  Mohanlal professes to be happy, his marriage didn’t work out so they got a divorce, he is best friends with his ex-wife and her new husband, he can make his TV show and write his books and enjoy life without any pressures.

Only there are little glimpses that he might actually regret what his life is.  The film opens with him imagining a party for his wedding anniversary, and then slowly the friends and wife and party disappear and reveal him alone in his house because his wife divorced him for his drinking.  Later, he dreams he is being woken by his son only to discover he is alone in his bed and his house.  And little glimpses of shame, when Madhu yells at a drunkard beating his wife in the street, Mohanlal hides his glass so Madhu cannot see he is drinking during the day as well.

And we get little glimpses of the price of his alcoholism.  He never actually becomes violent, but he bursts out in anger out of nowhere.  More interesting, and far harder for an actor to play, he always seems slightly disconnected from what is happening around him.  Even with his son, he isn’t quite all the way there.

It’s well structured, using the divorce to show us what Mohanlal could have and should have been.  Shanker Ramakrishnan, his wife’s second husband, is not heroic or special, he is just a very present husband and father.  He makes his stepson’s favorite cake, remembers what his favorite cake is.  He teases his wife and can tell when she is upset.  He has the split second reflexes you need in fatherhood, we see him grab his son from being hit by a car, moving with a surety and speed that Mohanlal could no longer muster.  And then things take a turn when Shanker confesses to Mohanlal that he has cancer, and if he dies, he wants Mohanlal to be there for their son (he says “our son”, it’s a nice touch, claiming equal right to fatherhood with Mohanlal) and for Kaniha, Mohanlal’s ex-wife.  Mohanlal fails immediately, getting drunk and telling Kaniha that Shanker is sick in the most hurtful way possible.

It would have been easy to make Mohanlal an abusive alcoholic, one who would shout at Kaniha for no reason or beat her.  But this is a different kind of alcoholic (although we do see him suddenly get angry at a party guest for no reason at one point), one who is always painfully cheerful, unaware and uncaring for the feelings of those around him.  He treats Shanker’s diagnosis and Kaniha’s learning of it as a big joke, descending into discussion of how he doesn’t like America, they shouldn’t go there for treatment, America is a terrible place.

So far, I am with the movie.  I am also with it when they show Mohanlal interviewing new police chief Lena on his show and criticizing her for not attacking the problem of addiction correctly, it’s interesting to open up the discussion to the police responsibility in this issue.  And I am with it when we get glimpses of the way alcoholism lowers inhibitions, for instance Madhu after his wife leaves town initially planning merely to talk and have a date with a call girl (I think call girl, from how they talk about it), and then after a few drinks looking forward to a sexual encounter instead. 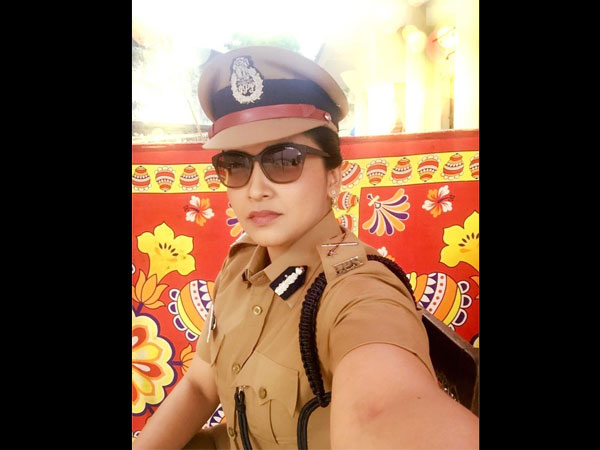 (I love it that Lena is a police officer and her gender isn’t really an issue, she plays the role of an angry determined police officer, and that’s it)

But I lose it when they go a little farther than that.  Mohanlal finally decides to stop drinking after a friend comes by and DIES IN HIS ARMS.  I like the idea that Mohanlal is part of a whole group of upper class intellectual alcoholics, a reminder that alcoholism can hit at any level and any intelligence.  I like that this friend didn’t seem particularly alcoholic beforehand, just one more person guzzling alcohol at a party.  I find it believable that one of his friends might die of the disease.  I find it less believable that he will spontaneously die while spitting up blood in Mohanlal’s arms, after having had one drink to many that Mohanlal gave him.

If only this film had a slightly better director!  There is a way to shoot this sequence that would be subtle and heartbreaking, but bright lighting and too many edits is not the way to do it.  It ends up just feeling ridiculously pat, of course just as Mohanlal is beginning to think about stopping drinking, he has this amazing life changing experience.

What’s frustrating is mixed in with that moment are little moments that work very well. Mohanlal’s regular bartender is worried about him, indicates that there are some costumers who drink a little and stop, and others who can’t stop.  Mohanlal’s young cameraman/producer has gotten in the habit of drinking as well since it is so easy with Mohanlal already doing it, showing how the culture of alcoholism can spread and spread through a social group.  And there’s just all the details of Mohanlal’s life, the way he claims not to be ashamed of what he is but also hides exactly how much he is drinking, showing how alcoholism involves denial even to yourself.

I’m not thrilled by the ending either.  Mohanlal decides to do a new kind of show, a day in the life of an alcoholic.  He has his producer follow around a plumber, Mohanlal’s maid’s husband, who is an alcoholic.  He starts the day reasonable and gets progressively worse, culminating in going home at night to beat his wife and son.  And then Mohanlal shows the happy ending, that the plumber is now in rehab and the wife has a new job.  I appreciate that, that this couple wasn’t just used for an object lesson but Mohanlal tried to help them.  But it’s also a bit heavy handed, to show alcohol is bad because it makes a man spend all his money and beat his family.  Obviously those are bad things, yes.  But in Mohanlal’s character we got such a more subtle version, he didn’t beat his family but he drove them away anyway, picked alcohol over them.  And he hasn’t lost all his money, but he has sacrificed his work to his addiction.  We see how he goes into his TV show amped up on liquor and turns it into a confrontation instead of a conversation.  Only now, with a clear head, is he able to make it truly informational instead of just a fight.

But, again, it is a movie that is still very good.  Mohanlal’s intelligent selfish alcoholic and the way he becomes suddenly able to see the world clearly and relate to people again when he stops drinking is memorable.  There is a good argument there about destructive behavior and the presumed relationship with creativity (a dangerous argument that people have been making for years) and how it is not true, Mohanlal is more creative than ever when sober.  And I love love love the vision of divorce.  Mohanlal and his ex and her new husband function together well as a unit for the sake of their son.  Well, as well as they can with Mohanlal’s issues.  And there is no happy ending of Shanker dying and Kaniha returning to Mohanlal, instead the happy ending is Shanker leaving for treatment and their son staying with Mohanlal while Kaniha and Shanker are gone.  A divorce can still be a good thing.  And, more relevant to the topic of this film, stopping your addiction doesn’t mean you magically get back everything you lost.

(Also, the movie has pretty songs)

1 thought on “Monday Malayalam: Spirit, Stopping Your Addiction Doesn’t Mean You Get Back Everything You Have Lost”