Happy news round-up day!  I mostly just want to talk about Prenaa Arora, because I love talking about her.  And I want you all’s (y’all’s?  y’alls?) opinion on it.  But there’s also another fun “Manikarnika is a disaster from which none of us can escape” quote from set, and a “oh Karan, don’t even pretend this isn’t nepotism” story about Janhvi.

Prerna Arora of KriArj is in Jail

An FIR was filed by Vashu Bhagnani claiming she double-sold the distribution rights to Kedarnath, he paid 32 crore and never got the film.  KriArj counter argues that Vashu files frivolous suits all the time and in fact he still owes them money for the previous film he bought distribution rights for, Pari.  (story here) 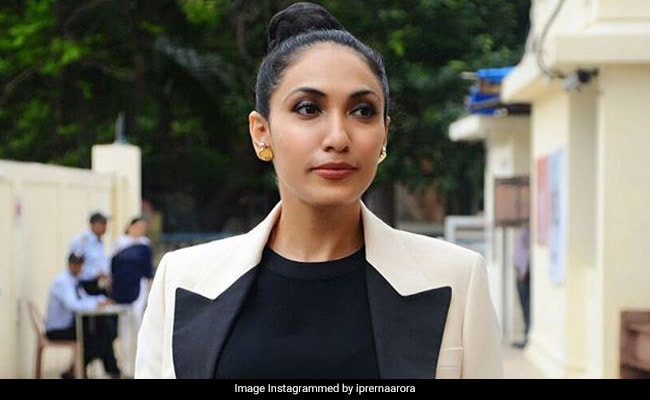 I don’t like to be happy for the problems of other people, and I definitely don’t want to be a bad feminist who tears other women down.  Or someone who leaps to conclusions.  But after Prenaa: A) implied John Abraham was stupid and didn’t know how to run a movie set; B) Refused to pay her personal masseur for 5 months while the woman was trying to make money to pay for her husband’s cancer treatment-I think I am okay with being just the littlest bit delighted that she is now in jail.  Plus, she was arrested by the Economics Offences Wing, not like just a local police station that hadn’t even investigated the claims.  Makes me think there must be something to them.

Just a reminder of who Prenaa is.  She is the daughter of a producer who was handed a production company (KriArj pictures) in her mid-twenties.  She promptly gave a bunch of interviews in designer clothes talking about being young and vibrant and risky (I only mention the designer clothes because the interviewers didn’t, and to me if you have the money to buy those, you are not really being so risky).  KriArj specialized in being a matchmaker type studio, they would take directors with film ideas put together and find major companies to pay for those ideas.  The money filtered through Prenaa.

Or, failed to filter through Prenaa.  The first issue that came up was Kedarnath which they tried to break off the contract for and take away from the director.  Which seemed like maybe it was a one time issue, since the director was Abhishek Kapoor and his last film (Fitoor) was a disaster.  But then the same kind of thing came up with John Abraham’s Parmanu, and this time they leaked stories that it was because John was an inexperienced producer, and gave official statements saying that he didn’t understand business contracts and stuff.  Eventually it went to court and a judge forced them to find a compromise, and John was able to get his film out of their clutches and make deals directly with a distributor.  Fanney Khan was their film too, also ran out of money, also had to make a deal directly instead of through them.

(Prerna and John in happier times.  Although they still don’t seem to like each other much)

And in the middle of all of this, it came up that Prenaa had a 60 year old female masseur who was expected to be on call midnight to 8am, worked for her for 5 months, never got paid, finally filed a police report in desperation after Prenaa refused again to pay her and physically threw her out of the house.  Prenaa responded by filing a counter-report that the woman stole from her.  Oh, and did I mention she only needed the money to pay off the loans she had to take out for hear dead husband’s cancer treatment?

So, yeah, I think I am okay with Prenaa being in jail.

Oh Manikarnika!  A cornucopia of stories that increase my job satisfaction!  Because anything is better than having to work on that set.  Newest story, after all the reshoots (including reshoots of action sequences), the CGI is crazy delayed.  So, it probably won’t release on time. (story here)

Here’s the quote from an “insider” in the article:

There’s a whole lot of work still pending. The post-production and the special effects are far from done. There are big epic-scaled battle sequences which require a lot of CGs (computer graphics).  Also, Kangana insisted on re-shooting some of battle sequences after she took over the direction. This proved costly and time-consuming, as the shooting and special effects had to be done again. So I don’t know if the film will make it (on schedule).

Oh dear.  I suppose if you were very very low on the totem pole, you might just be grateful for a steady paycheck on the never-ending shoot, and the occasional entertainment of watching the power shifts far far above you.  But for everyone else, this must be a NIGHTMARE.  Your work constantly thrown out and forced to redo it (I’ve had bosses like that, it is THE WORST), getting caught up in weird power dynamics, having to turn down other jobs you had lined up because this shoot is never ending.  Like I said, it just makes me happy that I have the job I have.

Janhvi in a Helicopter

So, Karan….oh dear.  He wants to make a biopic about one of the first two female pilots in the Indian Air Force, Gunjan Saxena, she flew unarmed helicopters in evacuation and observation missions during the Kargil conflict.  Okay, great, patriotic and feminist at the same time, and I suspect something a little more nuanced than it appears, just like Raazi.  Wouldn’t be surprised at some bits of bitterness over fighting for a nation that doesn’t fully appreciate them.  And then he decides to have Janhvi star in it.  Oh Karan! (story here) This is a very smart project, practically a guaranteed hit.  Especially once he throws in Dulquer as the potential male lead, giving it some good north-south crossover appeal supported by the patriotic topic.  But, why Janhvi?  There are so many other actresses, more experienced actresses, older actresses, who could pull this role off better than her.  And so many other movies she could be in that would let her get her feet wet, let her stay young a little longer, instead of trying to leap forward to this big important part.

It’s a guaranteed hit for her in the short term.  Introduce her to the southern audience, give her a role that is so good it’s almost impossible to mess it up, and get some good publicity for doing something “new” and “different”.  But then long term, it’s too much too soon (I think).  She can’t go back to simple light easy parts after a role like this, which means she is suddenly thrown into the spotlight with expectations raised sky high.  Let her relax, let her take some time and just have fun with her career, what’s the rush?  And at the same time, let some other more experienced older actress (Patralekha, Kiara Advani, Taapsee) take this very good very high profile part.

And that’s the news for today!  Tell me what you think, which story gets your dander up, which makes you happy.

15 thoughts on “News Round-Up: Prerna Arora is in Jail, Manikarnika is still in Post-Production, Janhvi Kapoor is in a Helicopter?”