I shouldn’t say “odd”, because I don’t have enough data to really make that judgement.  Apparently, the star (picture above) is actually a big name actor who has been in a bunch of stuff.  Which isn’t surprising, because he was really really good.  But he is also a little person and at times that is handled in a way that felt super progressive, and at other times, not so much.

The movie starts out with a super touching sequence, in which a little person lovingly cares for his son from babyhood to teenage years, as a single father, while struggling to make a success of his small roadside restaurant.  But then we meet father and son again, years later, and they are on vacation in Goa, and there are lots of jokes about drinking and womanizing, and some of them seem to rely a bit too much on the sight gag of the father’s height.  At one point, he is hidden in a rolling suitcase.

But then after all the wackiness, it gets sweet again!  Our hero wants to get married, but when he goes to meet a girl who seems perfect, her family can’t help but laugh when they see his father’s height.  And the reaction is played seriously, his father is his father and it hurts to see him humiliated.  And his father is a respectable man who doesn’t deserved to be treated this way.

And then the film promptly disrespects him again, and has him dress up like a little boy in order to help woo the girl that our hero really likes.  Thanks to various machinations like this, the girl is won over.  But her family is not, because they are concerned about hereditary issues and want to know where our hero’s mother is.  Which is maybe a little insulting, since it implies that hereditary dwarfism would be something to be avoided, but it is definitely more respectful than just laughing at him.

But then we have a bit which is somehow both progressive, and just odd!  In a flashback, we learn that our hero’s father had tried to be married when he was young, but no woman would have him (I actually don’t find this believable, by the way, because he is very very handsome.  Like, way more handsome than his son, who is supposed to be a big heart throb in the world of the film.  And in real life, apparently the actor had no problem finding a wife).  So, in desperation, he turns to a fertility doctor who suggests artificial insemination of a surrogate.  What?  This is so odd!  The movie goes in an interesting direction with it, but it feels kind of like an oddly inserted bit when he could just as easily have adopted a child.  Like maybe it was a public service announcement or another one of those things that is dealing with an issue which is really specific to Kerala and is just going over my head?

They are able to find a surrogate, who apparently did it to raise money for her husband’s treatment?  Or something?  Now, that’s just plain regressive!  That the only reason a woman can ever do anything is to serve her husband in some way.  Our hero goes to meet his mother, and she is in a poorer area in a small house.  He is all touched to see her, and when her two young daughters come out behind her, he embraces them instantly and insists that they should all come home with him.  But then her scary husband arrives and chases him away.  I thought they were going for a happy ending where she moves in with him and ends up with the super handsome little person whose baby she carried.  But no, I forgot it was an Indian movie, of course she stays with her scary husband.

As is shown through a legitimately disturbing scene in which the mother and sisters are introduced to the heroine’s family, and her husband bursts in and tries to strangle her in anger.  The strangling isn’t disturbing, what’s disturbing is that all the other characters just sort of stand around and watch.  Our hero, his uncles, our heroine’s family, they all stand back because it isn’t their place to interfere between husband and wife.  But, he’s actually killing her!  It’s not just a “tight slap”, he’s bouncing her head against the wall!  The other part that is so disturbing, is that this actress really nails the mannerisms of an abuse victim who is so abused, she has become paralyzed by fear.  She is constantly clinging to walls, shuddering if anyone looks at her, afraid even to smile without glancing at her husband for permission.  It’s horrible!  And the film never really addresses it!

But, back to the progressive bit, our hero yells at his Dad for how his life has been ruined by this whole surrogacy thing and he will never get married.  So Dad goes up to the roof and jumps.  He’s taken to the hospital, where the doctor warns our hero that he has severe brain damage, and may never get better or move beyond a childlike attitude.  Our hero swears he will always take care of him.  So now it is a lesson about caring for mentally ill people and not fearing or avoiding them.  That’s good!  Plus, this whole bit is completely unrelated to his status as a little person, it’s all just from the surrogacy which lead to the embarressing family background which lead to the end of the engagement and his son’s anger.

But then it gets bad again.  Since the actor is a little person, and he now has the mindset of a child, they just start treating him as a child.  They bring him home wrapped in blankets like a baby, they put him in a cradle, they use a highchair.  It’s not great.  Oh, but the heroine is totally fine with it.  She bumps into them and is all sweet and kind to the brain damaged Dad. 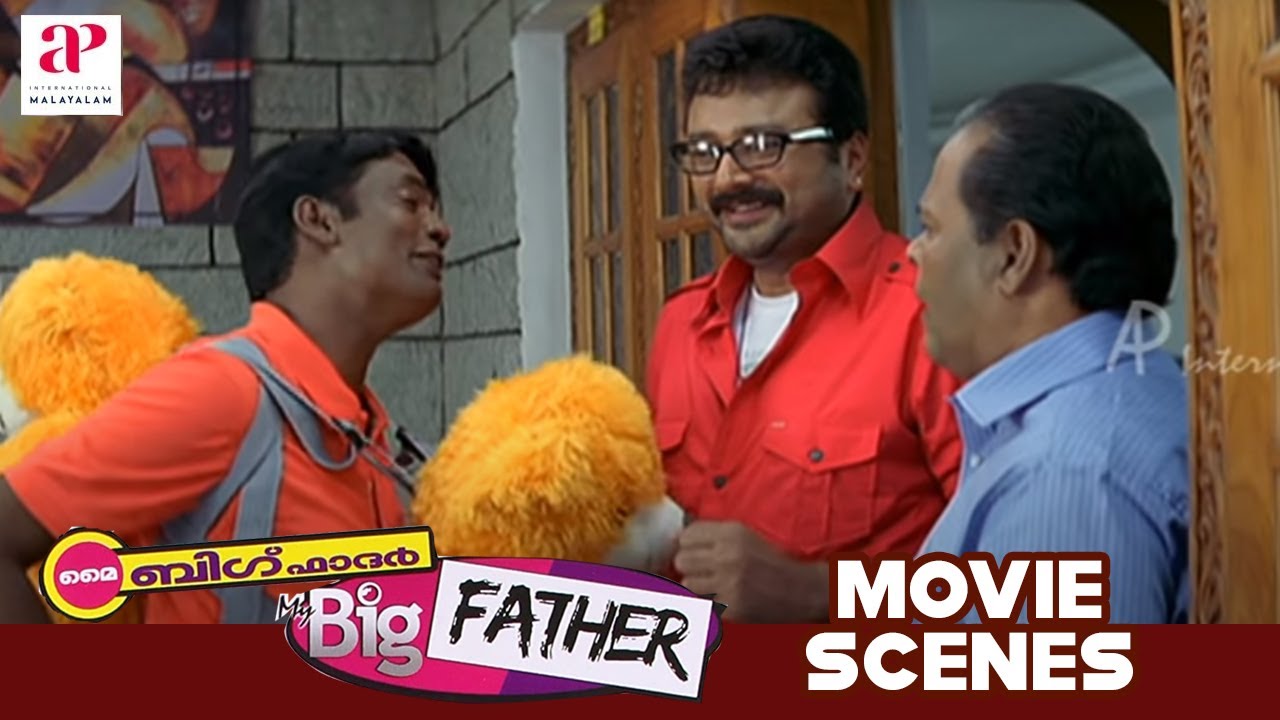 And then it turns into Haathi Mere Saathi.  Spoilers if you haven’t seen it!  But not really, because it is so episodic (like this movie), that just knowing the last 20 minutes won’t hurt anything.  In Haathi Mere Saathi, our hero has a deep deep bond with his elephants.  The heroine knows this and is totally fine with it and stands by him and his elephants through thick and thin.  Just like in this movie, where she is completely okay with his father.  And eventually, her family gives in, because her devotion is so strong.  Just like in this movie, where apparently she threatened suicide until her father gave in and let her marry our hero.  And then, just like in this movie, everything is fine until a child enters the picture.  Well, that, and her father gets around her.  Again, same in both movies.

In this, the father has a great speech about how he is worried about what the Dad will do to the baby, because his own (the heroine’s father’s) mother suffered from dementia, and had to be chained up towards the end, because she was so angry and confused.  So it’s not just blind prejudice, it’s experience that is making him nervous.  Actually, I have to say my mind went to a kind of similar place.  Not the chained up part of it, but having had my own relatives with dementia, part of the difficulties of their care towards the end is just the sheer size and weight of grown person.  You have to provide similar care and limits as you would with a small child, but to someone who is of the same size and weight as you.  There were plenty of times when it would have been a lot easier to care for a little person, just in terms of muscle strength.  So my reaction, from experience, is “great!  There’s a decent chance any parent might end up with dementia and need full time care, at least this time it is a little logistically simpler!”  Our hero doesn’t use this argument, and instead just holds firm on the “my father is my father” line, and doesn’t even want to deal with the possibility of dangerous dementia.

But the heroine is not so firm, especially when she starts seeing her baby being teased by the father.  It culminates when the father plays hide and seek, and hides the baby.  Everything turns out fine, but they decide it is time to put the father in a home (same thing happens in Haathi Mere Saathi, but it is an elephant, and they tie it up with chains).  The son leaves him, very upset, and then the dad injures himself.  While he is lying in bed, with a bandage on his head, the heroine’s father comes by and tries to pay the doctor off to arrange his death!  This is horrible!  Which the doctor says, but he doesn’t then also call the cops, which is what I would have done.

And then it all gets resolved happily! First, another sad part, when the father goes missing from the hospital, the heroine’s father swears he didn’t do anything and admits he regretted it immediately, the heroine feels terrible, and then they find the Dad and learn the second blow has cured him!  Of course!  Because that’s how blows to the head work!  But he refuses to come home, because he is so embarrassed by his past actions.  They finally convince him to come, because no matter what, his son and grandson still need him.

Oh, and while searching for him, they swung by Mom’s house again, and her husband is inexplicably now okay with the whole surrogacy thing and everyone embraces.  Only, he never apologizes for his obvious abuse, it’s still treated as “well, that’s the normal way for a guy to act when he is upset with his wife!  Just have to fix this problem, but if he gets upset again, he will probably do the same thing!”  So that whole plot point is just blech, start to finish, with nothing progressive about it.

But I actually liked the resolution of the father-son-daughter-in-law conflict!  The whole little person part of it isn’t even an issue any more, it is just about caring for a mentally disabled parent.  And they did a really good job of that, with the guilt of the child, and the injured dignity of the parent in their moments of clarity, and the final argument that having even a little bit of how they were before is still worth all the effort and challenges of being a caregiver.

On the whole, however, I feel like this is probably not the best Malayalam movie I could have watched!  Not as good as the elephant dung one from yesterday.  But tomorrow, I’ll do Vanaprastham, which two separate people promised me I would like, so I have high hopes!

6 thoughts on “I watched Another Malayalam Movie! ‘My Big Father’ is Very Odd”