Okay, it’s getting less press than the earlier “Ban” and stuff, but the real pressure is on now for Karan to do something about Fawad in Ae Dil Hai Mushkil.  The bottom line is being affected.  Although Fawad probably doesn’t care, because he has much more important things going on in his life!

I’ll give you the good news first.  Fawad’s wife had their baby!  Yaaaaaaay!  That was the “official” reason that he was back in Pakistan, but I’m sure it was also the “unofficial” reason.  I mean, if he really really had to be in India for promotions and things I’m sure he would have done it, but probably wished he could have been home.  Luckily, thanks to international tragedies and tensions, he gets to have a bit of a break and stay home with the baby, instead of rushing back to Bombay for the last push of promotions.  A tiny silver lining.  It’s a baby girl, no name announced or photos available yet.

And now the bad news for Fawad.  The Cinema Owners and Exhibitors Association of India has announced they are considering a ban on showing films featuring Pakistani artists, to be decided at an executive meeting soon.  And yes, this would affect Ae Dil Hai Mushkil (the earlier IMPPA ban would not, since it only referred to future work, not past work by Pakistani artists).

So, I looked up the COEAI and I couldn’t find much.  They don’t even have a website.  The only basic info I could find is that they are an old association, incorporated in 1946, and based in Bombay.  And the only news stories I could find (besides this one) was from back in 2011 when they spearheaded a strike by single-screen theater owners in Maharasthra against entertainment taxes (single-screens paid 45% of their ticket price in taxes; multiplexes paid no taxes at all).

What I am getting from this is that this isn’t an organization that does meaningless stunts.  The single-screen strike back in 2011 was the only other time they actually did something major and newsworthy, and it was in response to an extreme situation that was endangering their members.  It also seems clear that they are an organization with some real power, if they were able to coordinate that kind of strike.

The way the reports on this announcement phrased their discussion of a possible ban was also interesting, and extremely cautious, just “a number of exhibitors feel that they would not like to take the risk of going ahead with anything that is against public sentiment”.  To me, this sounds like they are running it up the flagpole to see who salutes, not making a decision in haste.  They can’t going to make any sudden moves, because the exhibitors are in a much more precarious situation than the film producers.

If the IMPPA issues a ban on Pakistani actors, they get some good press for a few days and help swung abstract public sentiment towards the film industry as a whole (fighting back against the general abstract swing away).  But if the exhibitors decide not to show Ae Dil Hai Mushkil and (potentially, depending on how long this lasts) Raees, that means a massive lost of box office revenue, the kind of revenue you count on keeping you going through the lean months of the rest of the year, the kind of loss that could put you out of business.  But if they do show Ae Dil Hai Mushkil, they run the risk of taking that same financial loss through a boycott, plus the potential physical loss through rioting, vandalism, fire, etc. etc.

(Protests against Jodha-Akbar.  Not great for the owner of the theater to try to clean up!)

Since the previous strike was so focused on supporting single-screens and keeping the theater industry healthy above any ideological motive, I am assuming the same thing is going on here.  They are testing the waters with this suggested ban.  If the response seems to indicate that the public wants to see these movies and will show up and buy tickets no matter what, great.  If the response seems to indicate that showing these movies will leave them open to damages, not worth it.

They are also, gently, putting pressure on Karan Johar, suggesting that perhaps “given the popular sentiment that has been against the film, it is important that the film’s producer Karan Johar voices his opinion on the silence of Pakistani artists.”  This has worked in the past, giving some kind of victory to the enemies of a film in order to receive their “forgiveness”, it’s what Karan did to get Wake Up Sid released on schedule.  But he followed a different tactic with My Name is Khan, that time meeting with and putting pressure directly on the theater owners and police to ensure the release.  Only, this time around, I’m not sure if the police would be with him.  And I’m also not sure if the theater owners are going to be so easy to convince. 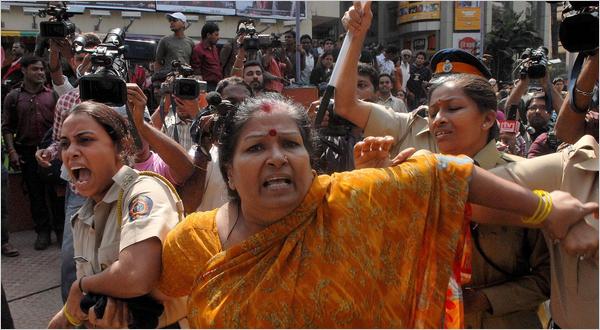 (From the My Name is Khan protests.  The police are taking them away, but it is still a bad thing to have in front of your movie theater, doesn’t exactly lend itself to family groups buying blocks of tickets)

Finally, what I find particularly fascinating about this story is how little if affects me, a member of the global audience.  Even if the Maharasthrian theaters, or the theaters through out India, ban these two movies, I can still see them.  It doesn’t necessarily have any effect on the global box office.

The audience has become so divided, overseas versus Indian and multiplex versus single-screen, but usually we are at least watching the same movies on more or less the same days.  But if these films go ahead and release but only in multiplexes and not single-screens, or overseas but not at home, that would be major.  It could be a sign of an official shift in the industry, that the overseas audience is now enough to support a film on its own and production houses can stop chasing after the Indian audience.  That would be tragic if it happened, film has such an ability to bring people together, I hate to think of it being used to divide people like that.