I say “all”, but really it’s just a subset of the commentators here.  But a strong subset.  Which includes myself.  I can enjoy an action film or a well-made drama, but there is just something about the big swoony romances with songs and impractical plots and lots of chemistry between the leads.  And this film definitely delivers!

Where to start?  I guess with Sushant.  He is SO GOOD!!!  The role calls for “charming, confident, and also young and humanly flawed”, and he pulls it off!  I just want to watch him onscreen all the time.

Kriti is…..okay.  Not actively irritating.  There weren’t really moments where I went “Wow, she just elevated that scene to a whole new level!”  But there also weren’t any moments where I thought “wow, she isn’t quite able to handle this scene.”  And I loved her look for this movie.  She has such a strong look, and this plot works best if she and Sushant appear to be equally strong people, not her as a fragile little damsel and him looming over her with all his muscles and so on.

Kriti was objectified too, but in an interesting way.  She wore her clothes casually in all scenes, bras showing almost all the time, loose fabrics, ties not fastened.  It wasn’t that “ooo, I’m accidentally showing skin!” kind of feel that I hate, like women don’t know how to dress themselves, or like clothes are some kind of modesty police with sexiness constantly trying to break through the barricades.  No, this was just a “clothes are there to be comfortable, and if it bothers you, I don’t care” kind of feeling. 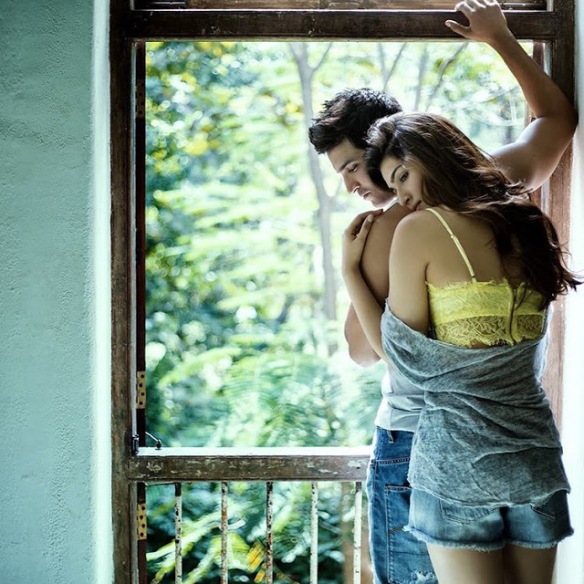 All of this adds up to a very very good romance.  I don’t know what the other reviewers were seeing, maybe they were looking for something different than I was, but I honestly have no idea why they gave it so many bad reviews.  This is crazy and over the top and swoony.  And also charming and funny and comfortable.  It had two characters who aren’t quite the same as anything I had seen before (although Sushant is a bit of a throwback to those 90s bad-boy-charmers-who-love-their-mothers-and-really-just-want-to-marry-the-right-girl types), who have a romance that isn’t quite like anything I had seen before.

And that’s not even getting into the twists!  Just the straight up “boy meets girl” part of it is fun on its own, so fun that I kind of wish that had been the whole movie.  Mostly because Sushant is a FREAKING DELIGHT, but also because it was really well written and really well directed and just generally very very good.

This is Dinesh Vijan’s first film as a director, but he’s Saif’s business partner, and has co-produced plenty of films, from Love Aaj Kal to Badlapur.  And all of that flows into this film.  It doesn’t feel like a “first time director” movie, it feels very confident and smooth, and he knew exactly what he wanted in every scene and every shot.

There’s one final ingredient I haven’t mentioned yet, Jim Sarbh.  He was the main hijacker in Neerja, that was his only mainstream film role before this.  But I just looked him up on wikipedia, and it looks like he has intensive stage experience, including studying at Emory in America.  And he is poised to explode, this role is followed by a part in the Sanjay Dutt biopic, and Padmavati.

(Get used to getting excited when you see this face)

And he should explode!  He is AMAZING in this!  Totally over the top in the most enjoyable and amusing way.  It reminds me of the first time I saw Nawazuddin in something, or Irrfan, or Naseerji.  That little something extra, a way of delivering a line that no one else could ever have imagined, let alone pulled off.

I just, I don’t know why no one is talking about this film!  I think maybe because the trailers didn’t sell it right?  If people had gone in knowing it would be a charming rom-com with an over the top melodrama chaser, that it will make them fall in love with Sushant, and their hearts beat faster in the action scenes, and boo and hiss the villain, I think the audience would be coming in, and the reviewers would be giving it a fair chance.

The best lines, the sweetest moments, the most heart-pounding action scenes, all of them were kept out of the trailer!  Instead we got some kind of blurry flashes and some love songs.  The really selling points of the film weren’t used to sell it.

(this should have been the centerpiece of the campaign, not all the other stuff)

Oh, and one more thing, just like everyone else I saw the trailer and went “Magadheera!”  And yes, it is.  But very very very very very very loosely.  Very very very very.  It’s Magadheera like Om Shanti Om is Karz.  Or Akele Hum Akele Tum is Kramer versus Kramer.  The central idea is loosely there, sort of, but all the details around it are just totally different.  In a really interesting way that I will get into in my SPOILERS review.

6 thoughts on “Raabta Review (NO SPOILERS): The Romantic Fantasy We Have All Been Craving!!!”