I fell behind this weekend, and now I have to write my Monday post seconds after finishing the movie.  Which is really too bad, because this is a film that really needs you to sit with it for a while before you are ready to talk about it.

Years ago, we had a guest speaker at our church who was a zen Buddhist priest.  He told a story about a man riding a train.  There was an old man in his car, and at one stop, another old man got on.  The two men greeted each other with exclamations and tears.  And then they sat together in silence for 45 minutes, until the second old man got off at his stop.  The younger man asked the remaining old man who that was, “My best friend from childhood, we had not seen each other in 40 years.”  The younger man couldn’t believe it, asked why they had just sat there, why hadn’t they talked together.  The older man said, “Because we had to wait for our hearts to be aligned.”

Anyway, that’s what I think I may not have waited long enough for with this movie.  I literally just finished it, and I haven’t lived with it long enough to be fully aligned with the message.  So forgive me if this review is a bit here and there and everywhere.

See, the film kind of felt here and there and everywhere too?  But not, at the same time.  That is what I am having a hard time grasping.  How did it feel so cohesive, all of one thing, while at the same time the story went up and down and all around in a way I couldn’t even make sense of while watching it and am just barely beginning to fully understand now.

You know what it reminds me of?  Chashme Buddoor.  Both films have a romance at the heart of them, everything is pointless besides the romance.  But around the edges there is so much just kind of life.  Loafing around towns, borrowing money, looking for work, catching (or failing to catch) criminals.  None of that really matters, but it is what we do to pass the time while waiting for what does matter.

I guess maybe that is why the film felt cohesive?  It knew the story at the heart of it, the story it wanted to tell.  And the rest of it was just killing time to get there.  And I think the only way I can approach the film is to start with the important story and move backwards to the rest of it.

We get a flashback about halfway through the film.  A few years earlier, Mohanlal was an underemployed shopboy in a different city.  A college girl liked him, helped bail him out of jail when he was wrongfully arrested, and lent him money to pay rent.  They fell in love, in a very messy real life way, with her paying for everything out of her pocket money and him having no hope of finding a job to support them.

His friends gave him bad advice, suggested he take her to a hotel and get her pregnant to force a marriage so they could be together.  He took her there, but when she asked to leave the hotel room, he tried to stop her.  She easily brushed past him, but was clearly heartbroken.  He immediately regretted his behavior, and left that town.

Now, in the present, he is working as a lowly watchman for a neighborhood.  And his old love has just moved in with her father.  At first she seems not to recognize her, then she seems mad at him.  He is wracked with guilt, and with agony over having lost the woman he still loves.

At the very end of the film, with the support of his new friend who has also arranged a job for him (Mammootty!), Mohanlal admits everything to her father and proposes.  And is turned down.  And only then does he learn, in the intervening years, she has been widowed.  He goes to talk to her and admits that, he always saw their story from his side, never considered that her life had continued and changed after him.  She admits that he broke her heart, that her marriage was an attempt to move on.  And now, in widowhood, she isn’t sure what she wants.  She sends him away.  As he is leaving the neighborhood for the final time, he stops the car and goes to talk to her, asking her to take her time, but know that he is waiting for her.

And that’s the end of the film.  No big drama, and no real resolution.  He did something bad years ago, and both their lives went on.  They have come together again, and maybe it will work out (probably it will) and maybe it won’t (almost certainly not).

But the point is that line right before, that he always just thought about his life, not about what might be happening in hers.  The title of the film is a neighborhood, Gandhi Nagar 2nd Street.  And this is a film about what it’s like to live in a neighborhood.  Where you know part of everybody’s story, but the whole of no one’s but your own.

(Similar to what Delhi 6 did, but more successful)

That’s why we meet even our hero/protagonist sidewise instead of head on.  We start with Sreenivasan (crazy stacked cast, by the way!) who is trying to avoid his old friend Mohanlal, unemployed and homeless and clearly ready to cadge meals and a place to life.  Sreenivasan sees him as a friend, but also a burden.  And we sympathize with poor Sreenivasan and celebrate with him when he manages to get Mohanlal off his hands by presenting him as a fake Gurkha to guard the neighborhood where his office is located.

Once Sreenivasan has left town, in an almost Psycho-esque shifting of perspective, we are now with Mohanlal.  Who arrives in the neighborhood and quickly identifies the characters.  The busybody older women.  The young flirt.  The drunkard.  And the one who interests him the most, the young teacher whose husband is in Dubai and might be able to help him get a job.  Mohanlal sees her as an opportunity to be exploited, the rest as threats or obstacles, that’s all.

The flashback arrives in the middle if the film.  But already things have started to shift a little.  Mohanlal goes from trying to win the Dubai-wife over by playing with her child, then comes to sincerely enjoy spending time with her, and with the children in her classroom.  The drunk has a scene talking about his broken heart, and the next morning he has died, fallen down and hit his head.  No one is just what they are on the surface, everyone has their own story.  And Mohanlal, the “Gurkha” guard, who runs errands and walks the streets at night, no one sees him and so he begins to see everyone else for what they really are.

While some of the characters of the street turn out to be deeper than they appear, others are more venomous.  And, to our shock, Mohanlal is one of them.  We know him as a humble desperate type.  He has no problem running errands, performing menial tasks, anything for an honest living.  And now we see, years earlier, he was not humble and a little more desperate.  He had no problem borrowing money from the women he loved, and after only a few moments of doubt, he agreed to seduce/date rape/or at the very least sleep with her with the purpose of getting her pregnant in order to guarantee a wealthy marriage.  Not a good person.

Now we know both parts of his story.  And we begin to learn the stories of others.  The Dubai wife, she is lonely.  Not just for her husband, but for her family who she left at her marriage.  She wants Mohanlal around, not because he is a romantic partner, but because he reminds her of her brothers.  Mohanlal, with her, reveals his own vulnerability.  He has mentioned before that he is looking for a job because his sister and brother-in-law threw him out of the family home and he can’t go back without a good job.  It sounds like a weak excuse as he repeats it over and over again.  But now, with this woman, he doesn’t have to say it, we can see in his eyes how her sympathy feels a hole in his life.  Later, when her husband returns and immediately takes up in support of Mohanlal, his story is complete.  He has regained the sister and brother-in-law, the family, that he lost which sent him on this wavering path. 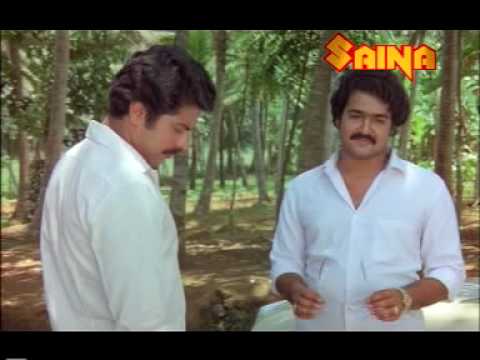 But before that, we have the culmination of his previous sin towards the woman he loves.  The “flirt” comes to her while she is alone in her house.  Like Mohanlal in the past, he tries to keep her trapped in a room with him without her permission.  And this time, Mohanlal rescues her.  He is the hero in her story, not the villain.  He has a second chance.

Only, he doesn’t.  Because it was never about him.  Or not just about him.  Just as his friendship with the Dubai wife was equally about her missing her brothers as it was him wanting her support, Sreenivasan’s efforts to help were about getting Mohanlal into his destined position and about getting Sreenivasan out of his responsibilities, all of this is about two things.  Or more.

That moment of redemption for Mohanlal, that has consequences that slowly string out.  The bossy neighborhood lady isn’t quite so harmless, talking her husband into getting revenge for the insult to their darling boy.  Mohanlal is attacked and fights off his attackers, but then spends the night in the Dubai wife’s house (the moment when she admits he reminds her of her brother).  Rumors start flying through the neighborhood about an affair between them.

Everything leads to everything else.  And circles backwards and circles forwards.  This is life, in a microcosm, actions have consequences, your past is never the past, and everyone has a past.

26 thoughts on “Monday Malayalam: Gandhi Nagar 2nd Street, A Movie to Sit With For a While”