Happy Thursday!  Sometime around midnight tonight (I haven’t figured out the schedule exactly yet) the last episode of Breathe will come out.  I wouldn’t be surprised if there is a second series at some point, so the story may not necessarily be over, but at least the first part will be resolved. (part 1 of my coverage here and part 2 here)

Things are moving fast now! Amit goes to Sapna’s house, interrupting Anuj’s first meeting with her parents, and insists on telling her that she is in danger.  His new supervisor doesn’t believe his suspicions but his assistant Hrishikesh does and agrees to work with him off the books investigating.  They start tracking down family members waiting for donors. At the same time, Madhavan is struggling to solve the problem of how to kill his failed first victim who is in a coma.  He has another interaction with his rowdy neighbor, breaking his stereo, and then is inspired on how to finish his murder, causing his own heart attack so that he can be brought into the same room in the ICU as his victim.  But his doctor girlfriend is getting suspicious, and Amit is getting close, almost chasing him down when he approaches Sapna’s house late at night, and ending the episode sitting in his living room as part of investigating the families.

This show really starts going in the second half, which is kind of a problem.  I know Amazon dropped the first 4 episodes all at once, and then parceled out the remainder one at a time.  I wonder if the creators always knew that would be the plan, and so had a slow start ending with a bang in the 4th episode?  Or if Amazon got them all at once and saw the shift and decided it made sense to release all 4 at once so people would watch right through until the ending hooked them?  It’s a good release schedule in general, I know streaming services struggle with that, how to have the advantages of the binging which gets the audience drawn in quickly, with the advantages of a weekly release which keeps people coming back.  To put it bluntly “how do you get people interested enough to sign up for a Prime subscription without making it easy for them to cancel it before the end of the trial period once they have seen what they want?”  This show turns that into an advantage, letting the opening move slowly and the speed increase as time goes on until it is moving at lightening speed in the final 4 episodes, making the time in between necessary for us to catch our breath.

There are so many things in this episode!  Right from the start, Amit showing up to warn Sapna.  What I love about this scene is how uncaring Amit is for his own pride, for being in control.  Which is partly due to how Amit plays it, he could be the angry avenging cop, but instead he seems focused on his goal and not worried about anything else.  Sapna’s father yells at him, he ignores him and focuses on Sapna, making sure she knows she is in danger.  He speaks to Anuj, not to warn him away from his wife or anything macho like that, but simply to remind him that he has to take care of Sapna now.  And stating as a fact that he (Amit) can keep her safe and Anuj and Sapna have to let him do that.  It’s all a great set-up for Amit’s next few big scene.

His next major moment is when he is waiting in the car outside Sapna’s house and Madhavan appears.  He is wearing a hoodie and it is dark, so Amit can’t get a good look, but he can sense something is wrong and chases after him.  But can’t catch him.  Maddy, the older Dad soccer coach, is in better shape than the young cop.  It’s a wake up call.  Amit realizes he needs to stop drinking and be better.  And the audience realizes this is more of a fair fight than we thought, Maddy doesn’t just have his brain going for him, he is also stronger and in better shape.  Amit may not be the hero we need to catch him.  He said confidently that he could and would protect Sapna, but can he?

(It also lets us see Maddy as Amit sees him, dangerous and mysterious instead of the friendly Dad figure we have seen him as thus far)

Meanwhile, Maddy is being weakened by success.  I was talking with Angie in the comments about how interesting it is that Maddy is a Christian.  I suspect the main reason for that is because organ donation is so accepted and encouraged within the Christian community in India, for whatever reason.  But it also allows for some interesting discussions between him and his mother.  In this episode, his mother reassures him that they are following “God’s path”.  It sounds like she might be moving towards acceptance of whatever happens, that it is God’s plan, that it will all turn out for the best.

His mother has been modeling for us a healthy process of grief, lowkey in the background, this whole time.  She started out just sad and frustrated.  And then got angry.  And now she is moving towards acceptance.  Still sad, but finding a healthy way to go on, to stop fighting the inevitable, to let go.

(Her face, visibly upset here while Maddy looks strangely focused, that tells us which one is going through a reasonable grief journey and which is resisting it)

And meanwhile, Maddy is making Josh keep studying.  It’s an odd scene, on the one hand it is “good fathering” to make him study and learn his school work.  And it’s the same logic he has been saying all along, keep acting as though Josh will survive.  But Josh is getting sicker and sicker.  Does Madhavan really want to spend what might be Josh’s last few weeks on earth forcing him to study?

But Madhavan of course can’t admit to anything that doesn’t follow his plan.  Even something as small as loud music interrupting his son’s forced study session.  And so he goes to the neighbors and, when they are unwilling to turn down the music, he attacks the stereo and breaks it.

What’s really interesting about this scene is that Maddy almost succeeds on charm alone.  He is so nice, the single father to the sick kid, that the young woman who already confessed an attraction to him earlier, turns off down the music for him, going against her abusive boyfriend.  That’s his real dangerous weapon, he can make anyone do anything, like him enough to want to help him.  His brutal obvious violence, that is what he resorts to only after he has no other choice.

The question is, can he make Amit believe in his charm?

Amit and Maddy meet face to face when Amit visits Maddy’s house.  Amit is immediately sure that Maddy is a little too perfect, he must be the killer.  Amit starts following him and gets more cops to help out off the books on following him.  He comes close to finding Maddy’s murder room, but Maddy manages to cover up last minute.  Meanwhile, Maddy’s girlfriend Shriswara is beginning to put together his lies and things that don’t add up as well.  Amit is unable to catch Maddy on anything, only discovers he is even more saintly than appeared, he is coaching soccer at a school for the blind.  Finally at the end Maddy completes his second to last murder, drowning a man in the pool of his healthclub.

This episode shows Amit sleeping in his daughter’s bed, which could be a sign of increased grief, but instead feels like another movement towards acceptance.  And props to Amit’s performance, again!  Starting at episode 3, he has been progressively more in control feeling, more focused on what is happening around him, better able to interact with his scene partners, his character just feels like he is waking up again, coming back to life. 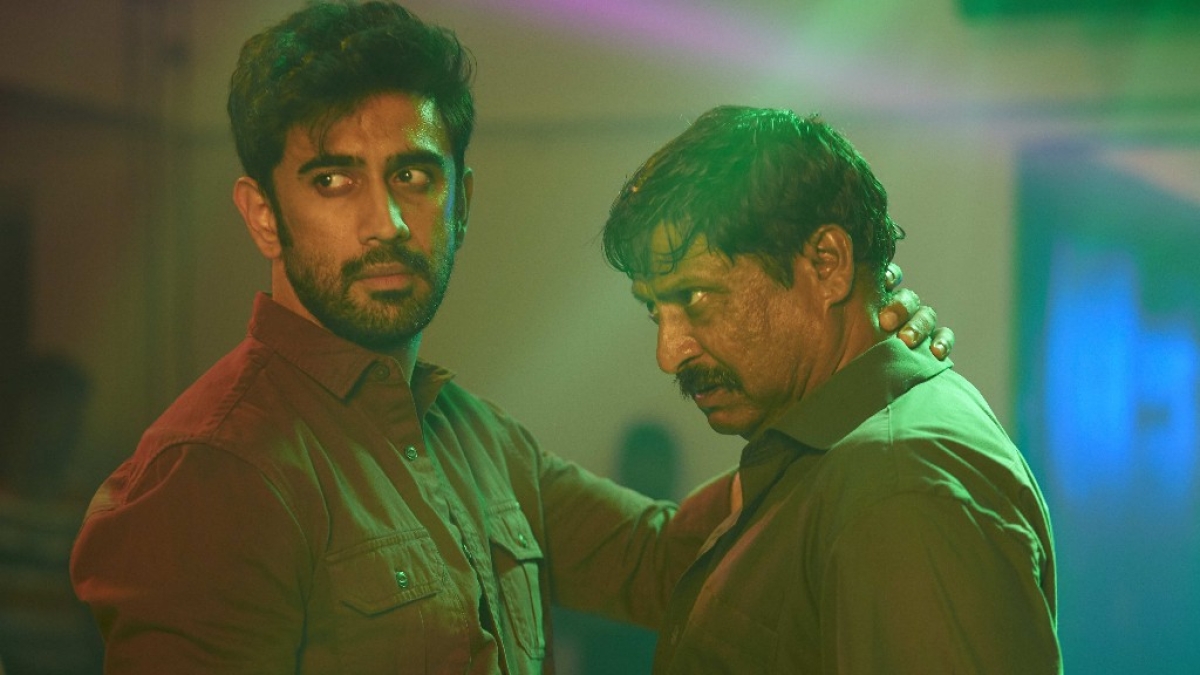 Which is important, because he has to be fully present for his scene with Maddy.  Unlike earlier when he was going through the motions in a living room like this with Hrishikesh’s family, now he is fully alive and alert to everything happening around him.  His one slight moment of hesitation is when Josh points a toy gun at him and he breaks for a second, visibly upset and insisting that Josh not play with guns.  That I could see coming back at the end, Maddy knowing his weak point and working on it.

But then Amit also sees Maddy’s weak point.  He asks what Maddy would do if someone offered him a black market organ, and Maddy casually says that he would report it to the police eventually.  First he would buy an organ for his son.  And Maddy says this, and then smilingly coolly says that of course he has to admit it, otherwise Amit would know he is lying and not trust him.  He has tipped his hand, not in the content of what he says, but revealing that he is always aware of what others think of him, always wants them to trust him.  That is what Amit can use (possibly) in a final confrontation, threatening Maddy with being hated by society.

Because, this episode also reveals, Maddy doesn’t hate himself as much as he used to.  Or as much as the audience may have thought he did.  Every episode, after the murder, we would see him in a bath, fully immersed, under water.  It seemed like a ritual, a baptism, a washing clean.  But now we learn it was none of that.  He was preparing for his second-to-last murder.  A wealthy man who went swimming at his club pool every night.  Maddy’s murder was to identify him and speak to him casually in the locker room, then follow him out to the pool, grab him and pull him under once the lights went out, and hold him there until he drowned while Maddy held his breath, thanks to his preparation every night in the bath.  A simple accidental death.  And Maddy is calm through out, his most hand-to-hand death so far, and he is cool in the locker room before, even seems to enjoy it.  And then equally cool under water.

There is one other plot in this episode, Maddy’s poor forgotten girlfriend Anuj.  Forgotten by the audience and Maddy.  She is sweet and hopeful, she already suggested that they might be married and immigrate together to a wonderful new life.  She is sweetly excited for them when Josh climbs up the transplant list.  But in this episode, in the background, she is starting to put too many things together.  Because Maddy forgot about her, he didn’t bother hiding himself from her quite as carefully as he did from others, the connection he didn’t intend to make.  She knows he hasn’t been working, she knows he was asking about asthma, and she knows he used a fake name to get into the hospital and into the same room as his victim, originally sick from an asthma attack.