Happy Day After Thanksgiving!!!!  Also known as, “the day I get to sleep in and then organize my life”.  I’m excited!  But also, taking a break because I will always always bring you your TGIF posts.

For those non-Americans, this is the deal with Thanksgiving.  For reasons that I am sure some dedicated food historian has tracked down, there is a specific set menu of fall seasonal items that you must always serve.  The exact version can vary, but you always MUST included these items. 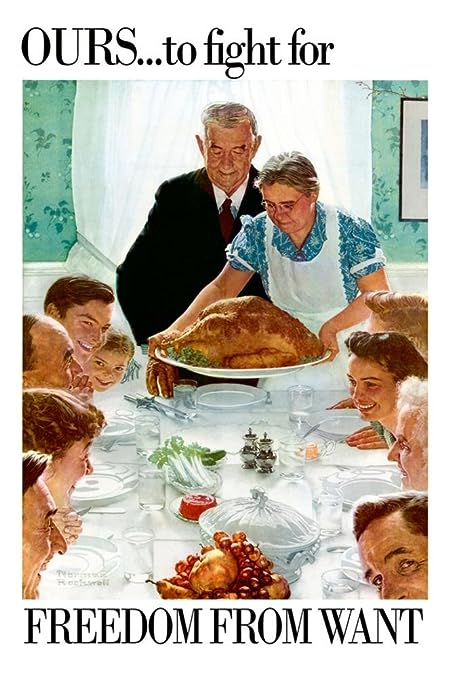 (Here is the classic Norman Rockwell painting of the whole dinner.  Part of his 4 Freedoms series, only no one likes to remember the other more controversial ones, like his Freedom of Religion.  Norman Rockwell was suuuuuper liberal)

I’ll start with the easy one, Madhuri is obviously apple pie.  Sweet, spicy, soft, seductive, everything.

(We use my grandmother’s recipe, which has cheese in the crust.  Kind of like Madhuri being sweet and sexy and spicy at the same time, you wouldn’t think the flavors would work together, but they really do)

Amitabh is the turkey, the center of it all, the thing it all revolves around.

(Now all I can see when I look at him is a turkey.  And vice versa)

Ayushmann Khurrana is Mashed Potatoes.  Good on his own, and makes everything else around him test better too, all without really forcing you to notice the taste.

(I love mashed potatoes.  And now I kind of want to see Badhai Ho again)

Stuffing can be dry and bland and terrible, or delicious and the best part of the meal.  So, I guess maybe Katrina?  Because she does tend to vary greatly film to film, mostly depending on the preparation.

(We use my other Grandma’s stuffing recipe which she learned from my great grandma.  It’s mostly butter, and it’s delicious)

Gravy.  To be used sparingly, but always the best part.  Shahrukh, I think.  Salty, addictive, almost too rich, but you put it on top of anything and it will taste better.  Also, kind of made from the drippings of the Amitabh turkey.

(I know if you’ve never had it, gravy sounds disgusting, but believe me it is delicious)

Cranberries.  Irrfan.  Refreshing, different, an unusual flavor all of its own within the meal.

Pumpkin Pie.  Some people like it better than apple, it’s a little creamier and richer and goes better with whipped cream.  Sridevi!

(We are one of those families that insists on whipping their own whipped cream.  It really is a lot better than store bought, but oh my gosh is it a surprising amount of work!)

And sometimes green bean casserole. It doesn’t really fit, and no one actually likes it, but there is so much promotion you just feel like you should try it at least once. Priyanka Chopra.

So, what do you think?  Agree or disagree?

And are there any dishes significant in your family that I missed?