This is my favorite way to be wrong.  A movie I wrote off as terrible based on the ad campaign and so on turns out to be great!  Boo for my predictive abilities but YAAAY for the WORLD!!!!

Well, this is a shock!  After a trailer and promotion campaign that was all about big action scenes, the actual film turns out to be about clever character work!!!!  Who would have thought it? 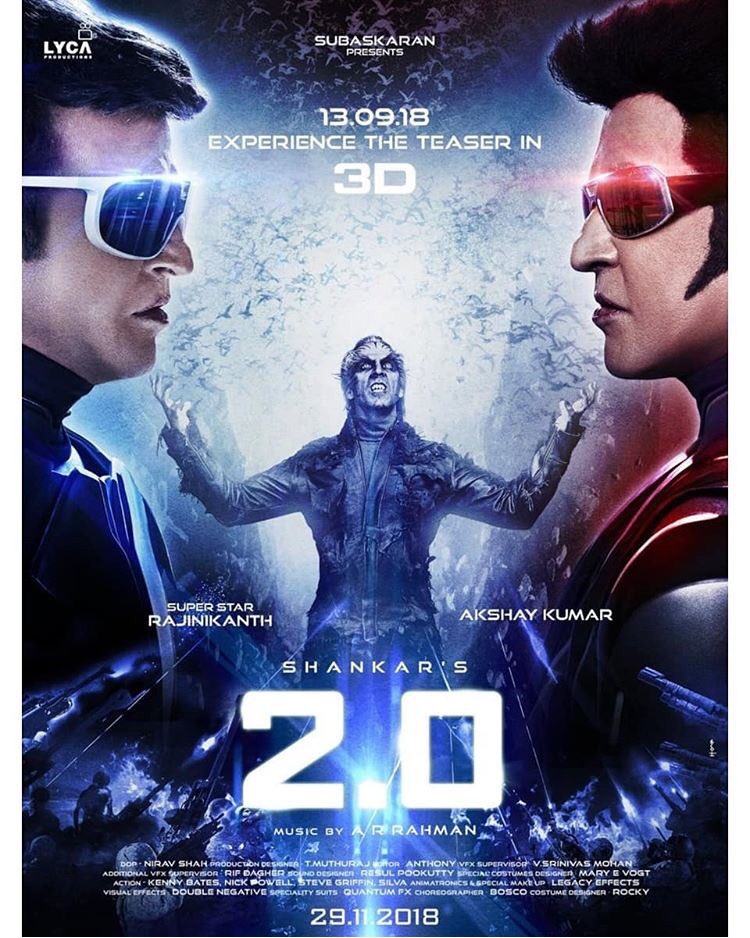 Usually a trailer that is all about a few moments of special effects tells me to expect that the movie will be a mess in terms of narrative, character, and overall structure.  And even the special effects will end up being underwhelming once they are in context, which is why we are only seeing quick flashes.

But, NOPE!!!!  I was mentally re-cutting the trailer while I watched it.  There’s this one North By Northwest sequence with Rajinikanth and Amy Jackson walking through an empty field as the tension builds and then POOF!  Big scary special effects I don’t want to spoil!  That would have been a great trailer, promising a build to the action and making the special effects really pop by putting them in context.

Or, there could have been a lot more Akshay in the trailer.  Based on what we saw, I thought he would be an almost unrecognizable voice over with a lot of CGI covering his face.  But instead, the post interval section is almost entirely about his life.  He is a real character, almost more of a real character than any of the heroes.  And the build to his confrontation with Rajinikanth is legitimately epic and exciting.  But we got none of that in the trailer.

Oh, and Rajinikanth!  Who plays THREE distinctly different characters.  And Amy Jackson, who has her own subtle and unusual performance.  What I’m saying is, the trailer sold the special effects, but it should have sold the acting.

Mostly what the trailer failed to convey is how perfectly put together this film is.  It starts with action, but then slows down and builds the characters.  Nothing is said directly, all is implied, but each person (or robot) onscreen has their own persona and motivations.  It moves smoothly through focusing on each character in turn until they are all filled in, and then mixing them together in the final third.  The action scenes serve to express who they are and how they are changing through the film, they aren’t just about action-action-action.  Beyond that, the pacing is just perfect.  Action, then plot movement, character moments, back to action, then plot, then character, and so on.  And after the most action filled sequence of all right before the interval, we come back for a completely different slow and sweet investigation of just one character for a solid half an hour.  And it all feels natural, leaving behind everything we were dealing with before, changing from a fast paced violent urban story to a slow sunny rural one.  The film was built so flawlessly that these massive tonal changes just felt right and natural, flowed perfectly, and resulted in the audience feeling they had experienced a pleasant variety of emotions and shades of tension over the course of the film.

The only thing I might want to change about the film is to put in a song sequence.  There are no real songs in the film, not until the end credits.  And I miss them!!!!  The excitement is so high for so long, I really needed a little break.  Plus, the bits of the songs we heard in the background were so great I wanted them to get their full centerpiece.

(This song is only over the end credits, not really in the movie.  Booo!)

But otherwise, it is just a really really well-made movie.  Avoids all the flaws I don’t like about Shankar (a concept of romantic relationships that seems to have been frozen at middle-school level, for instance), and keeps all the stuff I do like (surprisingly complex character conflicts, imaginative and original special effects concepts, great use of Rajinikanth).  I can honestly sincerely recommend that you go watch it.