I really wanted to do 3 news stories about Salman, so I could have a nice structure for my headline, but no luck!  And also no luck in only doing one on him and 2 on someone else, because his 2 stories today are too big to ignore.  And then I had to shove a 4th story in there because the Shahrukh rumor is too good to ignore.  It’s all out of balance!!!  Oh well.

First, Bollywoodhungama has the real money scoop on Sultan, not that it broke 300 crore yesterday, but what that means for the profits.  They are projecting a 200% profit on the film, 70 crore for production and 90 crore for marketing (the same as Fan, I wonder if Adi has declared this as the new standard for all Yash Raj productions?).  After adding together the overseas and Indian box office, plus home video and satellite rights (satellite, again, is the big money at 50 crore), and then subtracting the distributor’s share, they came up with 180 crore in pure profit.  Pretty good!

But, maybe not!  Because of clever old Jimmy Stewart.  I already wrote about this back when the financials of Airlift came out and it was revealed that Akshay took a comparative pittance in salary, and asked for a cut of the net instead.  Jimmy Stewart was the first big actor to do this, to take the money on the back end instead of upfront, and I’m not surprised that Indian stars are starting to do it as well.  Basically, it’s the only way they can ever get any money.  Their value is so high by this point, a “reasonable” salary would basically bankrupt a producer before the movie even came out.  Better to take a percentage after the release, when there is money burn.

It’s also an interesting formalization of a long existing informal practice, where actors would do a handshake deal with a producer they trusted and ask for “whatever he can afford” once the movie was over.  Shahrukh recently confirmed, again, in an interview, that from the beginning of his career, he never discussed money when signing a picture.  Only after it was over and released, then he would ask for whatever they could give him.  Which, of course, makes us all like Shahrukh.  But I don’t think he could be the only star to work like that, at least back when he was starting out, because I just can’t picture little 10-something Shahrukh Khan coming to Bombay and announcing he was completely altering the financial system of the film industry.  I’m guessing the “pay me what you can when you can” system was sort of the norm at that point, and now that corporations are involved, it has been changed into a formal “my contract guarantees 50% of the net” kind of thing.

Second Salman story: Heroine revealed!  They cast an actual Chinese person, Zhu Zhu.  She is in the Netflix series Marco Polo right now, and was in Cloud Atlas back in 2012.  More importantly, SHE WAS IN A MOVIE WITH ANDY LAU!!!!  One of those Hong Kong Andy Lau rom-coms that I love.  And now she gets to co-star with Salman Khan.

This casting is fascinating!  First, it seems to indicate that they are serious about going after the Chinese market, since they aren’t just casting a random no-name person.  Second, I really want to get Zhu Zhu’s take on what it’s like to work with megastar Andy Lau versus megastar Salman Khan.  Third, they are making the first serious attempt at the Chinese market (I’m not counting Chandni Chowk to China, because that was stupid and insulting), and they are making it about the Indo-China war?  Wouldn’t you want to make it about a time when China and India were actually getting along?  Like a remake of Dr. Kotnis? 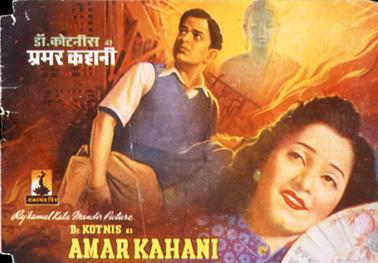 (Although, they did not cast an actual Chinese actress in Dr. Kotnis.  So that was bad.  But it was about an Indian doctor who gave his life helping the Chinese.  So that was good.)

Done with Salman, on to Ritiesh!  Well, really Ritiesh and Nargis.  There was this whole furor because Nargis opted out of all the Housefull 3 promotions and kind of dropped out of India and out of sight for a while (secret baby?  Probably not, I just always go to secret baby, because I like babies).  But now she is back and promoting Banjo, which is produced and starring Ritiesh.  And, of course, the reporters jumped on her in the promo press conference with questions about why she “disappeared” and what happened with Uday Chopra and is that why she disappeared and so on (probably if it had gone on long enough, one of them would have leaped to my same “secret baby” idea).

And, just like Aamir jumping in and answering for Kat during the Dhoom 3 promotions post-Bikini photo scandal, Ritiesh was very nice and gentlemanly and took the bullet for her, stopping the questions, according to Times of India:

“I am her spokesperson. Next question please.” Not only this, when another media person inquired her about why she was hiding her face upon her arrival at the airport, she said, “I usually travel like that. I was wearing the hoody.” Again coming to her rescue, Riteish added, “She used to come to the set like that. Nothing unusual in that.”

Now, Shahrukh!  Another historic epic rumor!  I am SO EXCITED about this news!  Although I am also a little nervous that the earlier rumor about a historic epic with Aditya Chopra was actually being confused with this movie, meaning we won’t get that Aditya movie which I am much more excited about.

Anyway, this epic would be with Sanjay Leela Bhansali (boooooo!), but would co-star Deepika and Shahid (yay!!!).  And the story sounds PERFECT for Shahrukh!  It’s supposedly based on the tale of a Muslim ruler who fell in love with a beautiful Indian queen and went to war to win her.

Depending on how Bhansali plays this, he could have Shahrukh in full sneering lustful evil mode, or do a more nuanced depiction of him as a wise and successful ruler brought down by love/lust.  The real guy, Alauddin Khilji, according to wikipedia, both committed massacres, and instituted tax and agriculture reforms.  Tax and agriculture reforms!  That can be filmic, right?  I mean, it kind of worked in Jodha-Akbar?  Anyway, I think tax reform is interesting!  They should make more movies about tax reform!

(See, if kings reform the tax system to spread the economic burden more equitably, then Aishwarya Rai will have sex with them!)

I’m still not thrilled by Bhansali doing yet another historic love triangle, and especially nervous about all the “Muslim king coming for our women” overtones to it.  But the casting!  That is so thrilling, I am willing to forgive everything else!  Shahrukh with a role that uses all his dramatic chops, and is age and position appropriate (older but still powerful and heroic).  Basically, I am picturing his character in Fan, only as a medieval ruler instead of a movie star.

Dips playing anything is always good, and Shahid really really needs a hit!  He kind of always needs a hit, doesn’t he?  Every movie for the past few years, it feels like, has done just good enough to keep him at a certain level, but no more.  But this could be very good for him, give him the kind of Shakespearean epic role he does so well, but in something that could also be a box office hit.  Plus, I assume, lots of battle scenes, which will help him keep shaking off that “chocolate hero” tag.

Speaking of chocolate heroes trying to age up, here’s the other interesting part of this news, it was supposed to be Ranveer Singh in the role as the 3rd leg of the triangle.  But post Bajirao, and that huge career boost it gave him (plus the other boost that is probably coming with Befikre), he is rumored to have backed out as he doesn’t want to play a supporting role any more.  And now Shahrukh has stepped in to play support.

Now, this either means that the circle of life is continuing, Ranveer has stepped up to leading star position and Shahrukh is stepping back to supporting.  Or, Ranveer is being stupid and doesn’t realize that “there are no small parts, only small actors” and it would be better to take this role and knock everyone else off the screen with what little he is given, than to pass it up and wait for a bigger part in a smaller movie.  But Shahrukh knows he will shine all the brighter if he manages to make more of an impression in a smaller “bad guy part” than Shahid does with the larger role.

19 thoughts on “News Round-Up: Salman Makes Big Profit on Sultan, Announces New Heroine for Next Film. And Ritiesh is a Gentlemen. Oh, and Shahrukh’s next role might be AWESOME!!!”