Woot!  Dear Zindagi is coming out in a week!  Because Shahrukh loves me and knows I am out of town over Thanksgiving and therefore he is releasing it 2 days early in America, just for me!  In return, as always, I am celebrating a little Shahrukh week before the release (if you somehow missed the Fan and Sultan celebrations, what happens is before a Khan release, I do a series of posts discussing earlier films by the lead in terms of what they might have in common with the upcoming one)

K3G isn’t the most obvious parallel (that’s Chak De, India, which I will get to eventually).  But I still found it interesting for how it managed to put Shahrukh in the older-boring-guardian role in the second half, after making him all sexy-sexy-sexy in the first half.  Which isn’t to say he wasn’t sexy in the second half!  I mean, cut my tongue out and roast it over the fire if I ever say Shahrukh isn’t sexy!  He is ALWAYS sexy!  It is a constant in life.  The sky is blue, God is good, SRK is sexy.

But what I mean is, in the first half of K3G he was playing the young romantic lead kind of sexy.  Very similar to his role in DDLJ, KKHH (mostly), and dozens of other movies.  He was a bit immature, a bit naughty, but good at heart.  And traditional at heart, he may have a casual relationship with his parents, but he still loves them and wants to make them happy.  He may flirt like crazy, but when he falls in love, marriage is the only thing on his mind.  He may wear modern clothes and cool sunglasses, but he can also rock the traditional wear.

But then the second half did something different.  It took all that cool dude stuff and asked “what would happen if he was confronted with the female version of himself and he was responsible for her?”  I love his interactions with Kareena in this movie!  It almost justifies the whole horrible “Poo” character, just to see how SRK reacts to her.  And really how the whole family reacts to her.

If you watch the film closely, it’s actually Pooja who changes things the most.  I wouldn’t say this is the “right” way to watch the movie, but it’s an emotionally rich aspect, to look at the Pooja-Rahul relationship.

She is just an irritating little girl at the start, right?  Mostly comic relief, an excuse for Shahrukh to see Kajol, a little childhood romance for lil’ Hrithik.  But then, in my favorite scene in the film, Shahrukh goes to Kajol’s house to say good-bye forever, because his duty to his father is greater than his duty to the woman he loves.  Or, I should put this another way, he could hurt his father much more than he could hurt Kajol.  Kajol has her father and her store, and she was single and happy before she met him.  Yes, he made her some implied promises and the neighbors probably talked a lot, but they aren’t officially engaged, and she has a family to support her no matter what happens.  Meanwhile, there’s Amitabh, crying with a broken heart because his son has betrayed him.  The choice is obvious!

(Okay, some more than implied promises.  He basically announces his intention to marry her in front of all her friends and neighbors)

But, Pooja!  Shahrukh arrives to see that Kajol’s father has just died.  She is no longer “fine” without him, she is in kind of bad shape.  It makes him start thinking about his father’s words again, they echo in his mind and he looks at Kajol, but he doesn’t move forward or make a decision one way or the other.  Until lil’ Pooja runs forward from the crowd, crying out for her sister, and it is the two of them clinging together which changes Shahrukh’s mind. 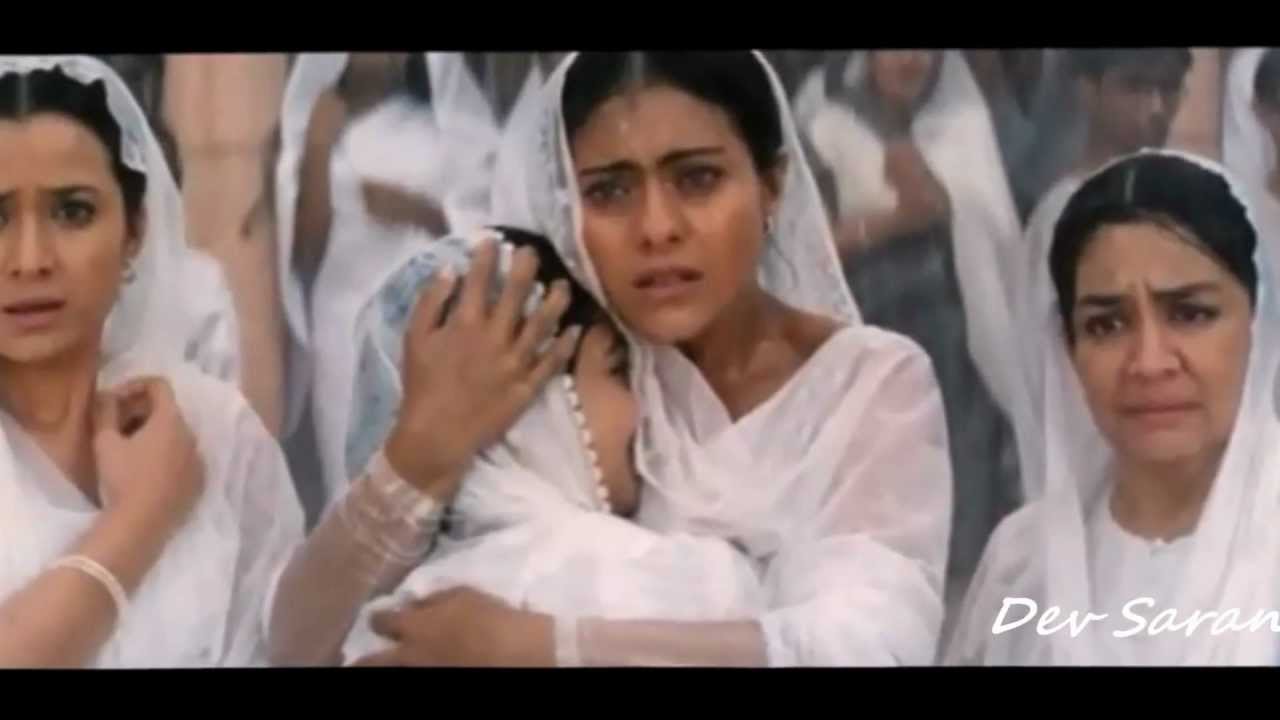 The duty towards the woman he loves, even now when she is in this terrible state, isn’t quite enough to make him go against his father.  But when a young girl who needs protection and support is added to the balance, then his path forward is clear.  If Pooja hadn’t been part of the film, Shahrukh might have been able to walk away at this moment with a clear conscious.  But there was a responsibility towards the most vulnerable to society, not spicy fully grown Kajol, but the only half-grown little Pooja.

From then on, you could argue that protection of Pooja is Shahrukh’s primary goal.  Once she grows up into Kareena, he is worried about keeping her covered up, protecting her from society.  He is worried about possibly flirtation between her and Hrithik.  He forgets his own wife in “Bole Chudiyaan” in his worry over his sister-in-law.  And, in the end, it is the change Hrithik brings about in Kareena which causes him to start to soften.  Seeing her praying, dressed modestly, and generally at peace, makes everything better.

And in the end-end, it is Kareena’s prayerful attitude in front of him which makes him agree to go back to his family home.

I’m not saying this is the “right” way to watch this movie, you could just as easily watch it as a story about adoption, or about love marriages, or about brothers.  But it is a possible reading, to see it all as revolving around Shahrukh’s non-romantic sense of responsibility to a young woman.  Which drove him to marry her older sister, move the family to London, work hard to support them all, resist allowing a strange young man into their home to protect her, finally welcome that young man in gratitude for how he changed her, and then in the end soften towards his own family when she asked him.  And it is certainly true that the marriage-decision scene revolves around lil’ Pooja just as much as around Shahrukh and Kajol.

What is also true is that this is the first film to show that Shahrukh could play that platonic older man role.  As I said, he is definitely still sexy!  But that’s not what his relationship with Kareena is about.  And it’s not like when he was Anjali’s father, where the actress was just a little girl so obviously there would be no sexual chemistry (blech!  That would be all kinds of gross!).  Kareena is a fully grown woman, in another movie just a year later they would have all kinds of sexual chemistry (Asoka has flaws, but lack of heat between the leads is not one of them).

But Shahrukh was able to play it in such a way that he was the boring glasses wearing “Jeeja” to Kareena, and she was his ward that he saw as a little girl who needed to be lectured and protected.  And then in the very next scene, he would be alone with Kajol, and there would be all kinds of heat!  It just didn’t turn on with Kareena.

So, bringing it back to Dear Zindagi, very curious how they will play his relationship with Alia in this.  If it will be like Kareena in K3G, which he shuts it off entirely with her, there is not even a hint of sexual tension, and if there was, it would be just plain gross.  Or if it will be a little more fun, like he kind of is in real life.  I don’t think he is actually sleeping with dozens of inappropriate people everyday, but certain any time he meets a fan or is interviewed by a woman, he puts on a little bit of a flirt, a little bit of a “hey, you are a woman, I am a man”.  Whether he is talking to a 21 year old or an 80 year old, it’s just kind of there.

I think of it like that water pipe he was trying to use to build up energy in Swades.  When he is with Kareena in K3G, it was totally shot off, completely dry, no water dripping out at all.  With various interviewers and audience interactions and so on, it’s there a little, just a few drops to add excitement.  With his romantic partner in most films, there’s a nice steady little stream of water at all times (say, during his walking and talking times in DDLJ or KANK, or when he is fighting with Rani in Chalte Chalte).  And then sometimes it will increase a little, in the love scenes or songs.  And then there will be the occasional moments like the Gazebo scene in KKHH or the bangles scene in K3G or the “Aur paas” scene in Dil To Pagal Hai where it is just this overwhelming stream of water so that you can’t even breath.

So, for Dear Zindagi, what’s the feeling?  Will this be a total shut off fatherly type thing?  Or just a little flirty dripping?  Or have we all been conned and it’s not a mentor story at all and the end of the film will be some kind of epic water all around love scene?