This was such a nice movie!  Not a perfect movie, a little confused in some parts, felt like the connective tissue was missing a bit, but overall a very nice movie.

We have had this little spurt of sports movies lately, all based on a true story of over coming adversity and so on and so on.  This isn’t the best of them, but it is far from the worst.  It loses track of the story it is telling sometimes, but it never loses track of it’s characters, which is just as important.

Maybe the reason it loses track of the story is because it is trying to be a sports movie when what it really wants to be is a family story.  It’s not about field hockey, it’s about brothers and fathers and sons and sisters and mothers and mentors.  Usually a sports movie comes alive on the field, this one goes to sleep.  It’s the off the field moments that shine. 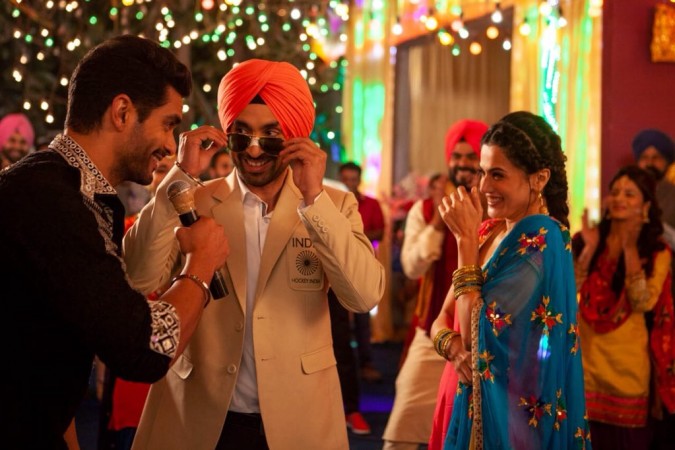 Part of that is because Diljit is the star.  Diljit is never going to play the laconic perfect unbreakable sports hero.  He will always bring something a little softer to his roles.  Sure, he is the hero, he is brave and strong and talented.  But he is also wise enough to know his limitations, secure enough to show his flaws.

Because Diljit is the star, it isn’t his character that you come out remembering.  He is generous enough to let Angad Bedi shine more than he.  And Taapsee after him.  Which ends up being the story the film tells, how this man struggled and succeeded not because of his own strength, but because of the people behind him.

That’s the story the film is telling, but it is also the story of the film.  They hired Diljit, who is good, and then also Angad Bedi, who turns out to be the secret weapon.  And Taapsee, who ends up having way more to do than you would expect.  Oh, and Shankar-Ehsaan-Loy, who once again let the whole film soar on their melodies.

Oh Shankar-Ehsaan-Loy!  I have to take a moment for them, especially because they just wrote this exact same soundtrack for Bhaag Milkha Bhaag.  The Punjabi flavored triumphal anthem, love song, sad song, and happy song.  But this soundtrack and that soundtrack are completely different.  That was for an Omprakesh Mehra-Farhan Khan film, a movie with an edge to it and a modernity and a challenge.  This is for a Diljit Dosanjh-Shaad Ali film, soothing and soft and beautiful.  And the music drives the narrative, drives it as much if not more than the performances, tells us what to feel and what to think about everything that is happening.

The sports film part of it isn’t where the feelings come from.  The sports are incidental, just the thing that Diljit happens to be able to do well, the thing that he focuses on when he chooses to grow up.  What is important is the relationships, the households.  And something that is a little unusual, we get to see both Diljit’s household and Taapsee’s.  The romance isn’t uneven, isn’t a matter of one family being boringly perfect and the other being a challenge.  Both sides have their difficulties that have shaped who these two young people are.  And these two young people, in turn, shape each other.  Taapsee changes as much as Diljit, learns to know herself in a new way just as he is learning to know himself.  She isn’t the lead of the film, she doesn’t have as much time as Diljit does, but she still changes rather than simply sit there and wait for him.

It’s not just that Diljit gets to know himself, it’s that those in his family learn to know him in a new way and vice versa.  This isn’t as much a story of a hockey star as the story of a petted and spoiled younger brother slowly learning to be grateful for the sacrifices made to get him where he is and to want to repay them.  Sacrifices by his parents, his brother, and eventually his nation.  Which is why the title song, in context, feels like an anthem not for a sports hero, but for everyone who holds on when the going is hard, who loves and sacrifices and pulls themselves up again.

4 thoughts on “Soorma Review (No SPOILERS): A Family Movie Masquerading as a Sports Movie”