Now that I have finished with Karan-Arjun, it is time to start the synopsis of the next SRKajol film!  In chronological order!  I wasn’t actually 100% confident that Karan-Arjun was before Baazigar, but #21yearsofKaranArjun was trending a couple days ago, so I guess it was!  I’ll expect for #21yearsofBaazigar to pop-up shortly.

Anyway, Baazigar!  The film that got Shahrukh his first FilmFare Award!  Onward!

We open on a rainy night on a soundstage.  Sorry, on a poorly lit tiny little corner of a slum area that is being very carefully framed not to show anything outside of a limited camera range.  We go into a small and depressing room where a woman is lying on the bed moaning.  It’s Raakhee!  Boy, she just has the worst luck in films where Shahrukh is her son!  On the plus side, there is a really cool sort of lattice pattern shadow on the wall behind her.  A nice way of adding interest to the shot, without putting in props that would make their poverty look less gruesome. A small boy (Baby Shahrukh!) feeds moaning Raakhee.  He is cute!  Kind of curly hair, looks a little like that kid who was in Agneepath (both versions).  Anyway, he is telling her that he already ate, that she always waits until he eats before she does, but she can now, and trying to feed her paratha.  Awara!  It’s Awara!  That opening sequence with adorably little Shashi playing Baby Raj Kapoor.  Aw, I was just talking about how awesome Shashi is earlier today!

Finally, after she keeps refusing food, he runs out the door and down the tiny narrow soundstage street to a door which he pounds and calls for the doctor. The doctor grabs his bag and comes immediately.  What happened to the cash-in-hand Indian medical standards I am used to from Indian film Doctors?  This man must be a saint!

Anyway, he comes with Baby Shahrukh back to the small and depressing room where his mother is lying on the bed.  The doctor says “Ah!  She has suffered a Great Setback!  Good luck with that!” and leaves.  Okay, so maybe free medical care isn’t the best.  Also, next time I call in sick to work, I am so saying I “suffered a Great Setback” and that’s why I have to spend the day in bed.

The doctor leaves, and Baby Shahrukh is depressed and angry (about the state of free medical care in India?).  He wanders over to a corner of the room?  Or apartment?  Anyway, the camera is outside the window now and I am confused about the spatial arrangement.  But it is a cool shot, Baby Shahrukh is standing behind a table, he puts a huge black suitcase on top of it.  He opens the lid of the suitcase, temporarily obscuring our view of him, and then we see, through the window, that he has pulled a photo out of the suitcase and is starring at it.  He keeps starring for a moment, than angrily turns and flings the photos away and the fly through the air!  Freezeframe, name of scriptwriter!  And he should get a freezeframe, this script is awesome!

Speaking of, I’m going to stop here, and take a moment to make a meta-decision about how I will move forward.  So, the thing is, Baazigar is an Abbas-Mustan (producer/director brothers who specialize in suspense) movie.  Which means it will, inevitably, have an awesome twist, or multiple awesome twists, over the course of the film.  I already know what twists are coming in Baazigar, I’m not actually watching it for the first time as I write this, or even the 2nd or 3rd time.  It’s an SRKajol movie, I’ve watched every one of these at least half a dozen times by now!  But do I want you to experience with me as a re-watch, or as the first time?

Some movies, like SRK’s Don, for instance, are actually more fun to re-watch when you know how they will end.  Everything hangs together, and you can appreciate little acting and directing touches you may not have noticed the first time through.  Other movies, like Jewel Thief, are far more enjoyable the first time, when you are still trying to guess what is happening.  On a second viewing, you start to notice the flaws and gaps in the Evil Plan, “Wait, why did they have to do this?  Who’s this lady?  Wouldn’t it have been easier to just pull off a simple snatch and grab?” 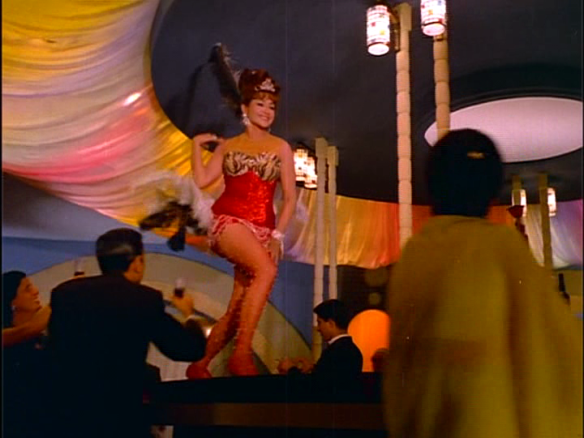 (Why does the plot stop dead for a Helen number?  Besides just that Helen is wonderful?)

Baazigar doesn’t have any gaps in the plotting necessarily (Abbas-Mustan run a tight ship!), but it is definitely more enjoyable the first time through, being gobsmacked by the twists and trying to catch all the clues.  So what I am going to do, Spoiler-wise, is indicate and make note of all the big clues that are dropped which any super focused viewer would notice.  But I will try not to give you any hints as to what they all mean.

So, back to the film!  Old black suitcase, sick Mom, photograph.  These are clues!  Remember them!!!!

Oh, and the screenwriters were the first names I mentioned, but during this whole rain-run-doctor-old black suitcase sequence, occasional red text has been showing up on the screen with the names of the stars.  Kajol gets pretty high billing, like third, and Shilpa Shetty goes last, with an “and introducing!”.  But no Shahrukh!  Maybe he isn’t famous enough yet?  Or enough of a draw?  But apparently Kajol, already, was beloved enough that her name went up super early so everyone could relax and go “oh good, she will be in the film eventually!”

Post-old black suitcase, Baby Shahrukh is lying in bed next to nutso Raakhee, tossing and turning.  Cut to, brief flashes of Raakhee running in the rain, Baby Shahrukh yelling after her, all in reverse negative film so we know it is a dream.  And he bursts awake!  And it’s grown up Shahrukh’s eyes!  But, they’re green?  That’s so weird!  We all know he has brown eyes.  And the camera lingers on them for a moment, which means, CLUE!  Remember this!

Shahrukh is still a baby, by the way, as you see when the camera pulls out.  I mean, not played by a child actor, but very very young looking Shahrukh.  Soft round cheeks, soft round body, skinny arms, clothes that don’t quite fit right.  Oh age-appropriate version of Shahrukh!  I wish I was more attracted to you!  And yet, somehow, I just want the incredibly inappropriate old man version. 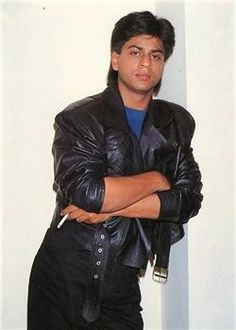 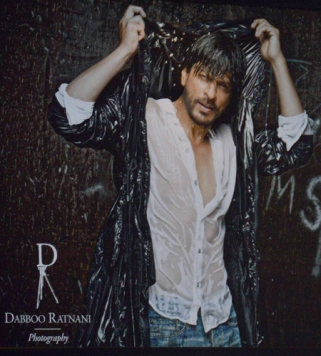 (it’s not just me, right?  One of these guys is way way hotter than the other?)

Anyway, he’s sweet, and his house is super-sweet.  Lots of light, white, bright, Raakhee-mom has a nice bed now.  And there is an older woman who he is calling “auntie” but is apparently actually their neighbor, who is going to look after Raakhee while Shahrukh goes to the city.  Oh, also, Shahrukh is still doing the Awara thing, getting his mother to eat by telling her he has already eaten.  Because he’s sweet and she’s nuts.

He finally takes his leave, and walks out the door, revealing a cute little front porch, a tiny yard with a fence, and red shutters.  I want this house!  As he walks through the gate, he looks down and picks up a coin on the ground.  His face changes slightly as he looks at it, getting a little serious-er (similar to the change he does in Dilwale, but less so).  The screen freezes and “Shah Rukh Khan” pops up in big red letters, followed by “In”.  And then he flips the coin in the air, it flies up, and dots the “i” on “BAAZIGAR”.

Okay, I should really keep going, because this is a super short post, but I can’t resist ending on that image