I don’t mean he’s getting the famous Kapoor figure (fingers crossed he never has that).  Or the onscreen charm (he has always had that), but he is beginning to get just a hint of that terrifying interview quality.  From what I’ve seen and read, it sounds like all the Kapoor men (except Shashi) have that a little bit, that slight hint of “Lord of the Manor, Don’t Cross Me or I’ll Have You Killed” in their eyes.  On the other hand, Ranveer is still a total sweetheart. (first episode discussed here, and second here, and third here)

Okay, back to my notes!  Right from the start, this episode is a little different, because Ranveer and Ranbir are aggressive about taking control.  Shahrukh and Akshay, they could hang back, follow the planned questions, and still make a big impact within that framework.  Varun and Arjun, they had some careful sheltering and structure to hold them in place.  Ranveer and Ranbir, they blow right through the structure, and Karan lets them!

The cold open is different, this time it is Ranveer and Ranbir in Karan’s dressing room, instead of Karan preparing.  And Karan is waiting for them in the studio.  And then when the show proper starts, right away the conversation is different too.  Karan tries to take control, and Ranveer and Ranbir just barrel right over him.  And they are so flirty!  With Karan!  Joking about how good he looks and how they want to sit on his lap and the images he puts in their minds and so on and so on.

(Also, they steal his shoes)

Karan does at least manage to leap right in and get the “elephant in the room” out of the way, by which he means Deepika.  And Ranbir and Ranveer just kind of blow right past it.  Yeah, Ranbir dated her 6-7 years ago, but he’s worked with her since, and the 3 of them have hung out together, it’s all no biggie.  Karan keeps pushing a little, asking “so now you are saying you are best friends?”  And that’s when we get the first little glimpse of his father coming out in Ranbir.  A bit of a snap to it when he says “We’re not best friends.  I mean, you invited us on together, so we are on together.”  It doesn’t feel like he is mad at Ranveer, or even at Karan, just at being manipulated and “managed”.  Kapoor’s aren’t “managed”; they manage others.

Speaking of, Ranveer starts joking around a bit about when Ranbir is going to direct his film, and Ranbir reacts by just sort of sitting back and looking serious.  I forgot about that!  Back before Saawariya descended on us, he was going to be the Kapoor to resuscitate RK Films.  Studied film in New York, worked as an assistant director for SLB, casually mentioned in some interviews that he had a vision for the studio.  From how Ranbir reacted here, looks like that might still be on the docket.  It might be a good move for his career, he’s established his “serious actor” credentials over and over, and his personal life has reached the point where there could hardly be a surprising scandal left.  Might be a good time to step back and get serious about saving the family business.

Oh, and speaking of RK Films, Karan responds to their joking by mentioning that he would love to cast them opposite each other, he wants to remake Sangam!  But he doesn’t say it like a joke, more like it is a thing they should already know, and they react like they already know it, like he’s talked about it with them before.  Oh man, I would love to see them in Sangam!  Ranbir would be perfect for the Rajendra Kumar role, and Ranveer would be amazing playing Ranbir’s grandfather.  Or, I suppose it could go the other way, they could both stretch themselves and play a little against type.  Either way, it is SO the story of them and Deepika in real life!  Going from the upper class reserved type who you passionately love, to the lower class ebullient type who passionately loves you. 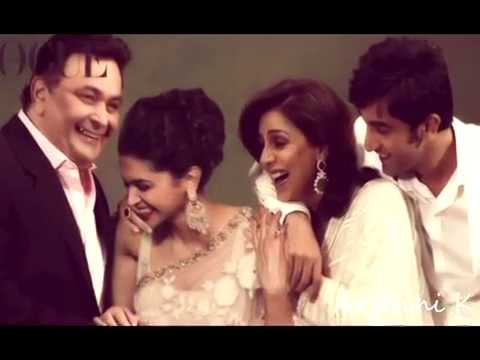 (Oh Dips!  Don’t trust it, he’s not ready for a real relationship!  But also don’t worry, you will be happy again!)

Let’s see, what else is in my notes?  Oh, Karan keeps pushing them, asking about relationship status, and finally Ranveer turns it back on him, asking for his status, and he says casually “single” and Ranbir says “Really?” in a way that feels kind of more like “watch yourself, I know things” than just jokey flirting.  So Karan modifies it his answer to be “single-it’s complicated”.  Huh!  I wonder if that is because Ayan Mukherjee is Ranbir’s best friend?  Or because Ranbir learned things when he was working with Karan on the ADHM character backstory?

So long as I am wildly speculating on things, I was also interested in the little back and forth between Ranveer and Ranbir when Karan asked them a series of questions about their relationships.  It didn’t feel aggressive or anything, more just kind of surprised at their differences.  Ranveer has never been insecure in a relationship, never checked his girlfriend’s phone, never had his own phone checked, all he wants is to come home at the end of the night to his girlfriend.  And Ranbir just sort of listens.  I could see this is being a sincere thing, that Ranbir is really interested in how easily Ranveer seems to make things work, because he is ready to get serious in his real life and he sincerely doesn’t know how to make a relationship work.  I could also see it being Ranbir really interested in how easily Ranveer handles questions about his personal life because he is ready to seem to be serious in front of the media and doesn’t know how to do that.

Hmm, what else?  Oh!  Director slams!  My favorite!  They start by talking about SLB, who of course has made Ranveer’s career and back in the day almost strangled Ranbir’s in its cradle.  Ranbir is, well, honest about it.  He points out that SLB is great, but can sometimes get entirely into his own head and his own vision and lose track of the plot, meaning with him “you can go up and down.”  Ranveer is sitting there nodding away the whole time.  Hmm.  I wonder how Padmavati is going?

And then Bombay Velvet comes up and Ranbir and Karan both kind of roll their eyes about it.  Ranveer’s words of encouragement: “I really thought it wasn’t that bad!”  Oh Ranveer!  Sometimes the kind thing is worse than the mean thing.

They also mention that Karan should try acting again, Karan asks what role he should play, and Ranbir says “Saba! From Ae Dil!”  I COMPLETELY AGREE!!!!  And then Karan breathily recites from one Aish’s poetic lines perfectly, proving all three of us (me, Ranbir, and Ranveer), completely right.

Rapid Fire!  With a twist!  It was kind of like “have you ever” and every time Ranveer and Ranbir had done something, they had to kiss special guest Arjun Kapoor sitting between them on the cheek that was facing them.  Before moving on, which is stranger?  To be kissing your second cousin on the cheek, or to be kissing your ex-girlfriend’s cousin-brother on the cheek?  I could go either way!  Well, until it got into questions like “have you joined the mile-high club?” and I suddenly realized that some of these cheeky questions Ranbir was answering by kissing Arjun on the cheek might be about the sex he had with Arjun’s cousin-sister!  EWWWWW!  Yeah, that’s worse than a little light incest between Ranveer and Arjun.

Oh, and speaking of Sonam and their break-up, one of Karan’s questions was “have you ever fantasized about your girlfriend’s friend?”  Ranveer kissed yes, Ranbir did not.  How many people watching this, myself included, immediately translated that to “I never fantasized about them, because I just slept with them in real life”?

Speaking of Ranbir’s sex life, he gets serious at one point as forces Karan to confirm that, for the past almost a year, Ranbir has been celibate, just focusing on getting his head on straight.  Which is probably really healthy and what I would recommend to him if he was, like, a friend of mine.  But it is SUPER boring in terms of gossip!

And one final thing about rapid fire, Karan has finally given up on the buzzers!  4 episodes in, they have never worked this season, and now they are just gone and he has the players raise their hands instead.

Which is making me wonder, are these all filmed in an afternoon?  Is there some reason no one had time to run out and buy better buzzers between episodes?  It would kind of make sense, Karan is so incredibly busy, and these episodes are clearly edited down and filmed without an audience.  Why not just take a soundstage for a day and bring in a whole series of famous people?  The only problem would be, of course, if the buzzers stop working and you are stuck trying to make it work without them.

10 thoughts on “Koffee With Karan: Ranbir is Turning Into His Father!”