At least, that’s what happened for me!  Amitabh made me cry, and Farhan made me want to throw something.  So, an emotional day for me!

First, the crying one.  For teacher’s day, Amitabh wrote a letter to his two granddaughters, and also posted it to his twitter.  Normally I would be angry about posting something like this so publically, but it is so clearly a letter not just to his two granddaughters, but to all the young women of the nation, and to all the people of the nation who might criticize them, that I am happy he posted it for all to see.  So, you ready to cry? (transcription courtesy of Bollywoodhungama)

Both of you may be a Nanda or a Bachchan, but you are also girls…women ! And because you are women people will force their thinking, their boundaries on you. They will tell you how to dress, how to behave, who you can meet and where you can go.

Don’t live in the shadows of people’s judgement. Make your own choices in the light of your own wisdom. Don’t let anyone make you believe that the length of your skirt is a measure of your character.

People will talk. They shall say some terrible things. But that doesn’t mean you have to listen to everyone. Never ever worry about – log kya kahenge. At the end of the day, you are the only one who will face the consequences of your actions, so don’t let other people make your decisions for you.

Navya – the privilege your name, your surname offers you, will not protect you from the difficulties you will face because you ‘re a woman. Aaradhya – by the time you see and understand this, I may well not be around. But I think what I am saying today shall still be relevant.

This may be a difficult, difficult world to be a woman. But I believe that it is women like you that will change that. It may not be easy, setting your own boundaries, making your own choices, rising above people ‘s

judgement. But YOU !…you can set an example for women everywhere.

Do this and you would have done more than I have ever done, and it will be my honor to be known not as Amitabh Bachchan, but as your grandfather !!

With all my love

I don’t really have anything to add to it, but I am mostly delighted that he called out his father, and Navya’s paternal side as where their honor came from.  He could so easily mention the people who are so much more important to the larger world, himself and Raj Kapoor, but instead he chose the ones who are important within their family.
Meanwhile, Farhan continues to NOT work on Don 3!!!!  Or, in fact, any script!!!  I was willing to give him a few years to get the acting out of his system, but it is well over time for him to stop futzing around with acting and being a rock star, and get back to what his god-given talent has designed him for, directing and writing!!!  And now the first teaser for Rock On 2 is out, which combines both of his hobbies, being a rock star and a movie star, and has nothing to do with his real talent, directing!!!  I mean, he’s fine as a movie star, but plenty of people are “fine” as a movie star, and no one else in the world can make Dil Chahta Hai.
The teaser is posted exclusively on ErosNow, for now (once it is on youtube, I will try to remember to come back and embed it).  To see it, just click the image below to go straight to Eros.  And then come back here if you want to read what I think! 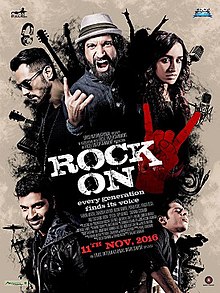 So, Farhan’s a mentor now?  Magik, the band with the stupid name, is a huge hit?  Arjun Kapoor has cut his hair?  And Shraddha is the new discovery they have to teach to find her voice?  And there is a big fire that kind of seems like it is related to that Made in India event fire, and Mother India at the same time?
Now, my first thought is “Farhan!!!  Why are you playing an artistic mentor onscreen instead of directing and being an artistic mentor offscreen?!?!?!?”  My second thought is, they better not insert a Shraddha-Farhan romance, because I really liked Prachi in the first one.  And my third thought is, a man bun?  Really Farhan?