Oh Pride!  The happiest weekend of the year in terms of fanfic/silly content.  The saddest weekend of the year in terms of not having loud drunk people sit next to me on the train.  At least this year I have no reason to leave the house (my church lemonade stand/marching group can get along without me!), so I can just huddle up indoors and work on my epic Pride themed fanfic.  I’m going to try to hit all the letters, L and G and B and T and Q and maybe H.  If Indian film isn’t going to serve that audience, it is up to me to fill in the gap!  Anyway, a great TGIF post topic, I think we can all agree.

Reema Kagti and Zoya Akhtar are just the cutest couple EVER!!!!  And I would apologize for outing them, but come on.  I don’t think they are exactly hiding.  Unless they really are just best friends for decades who live together and do everything together and hold hands all the time?

And they seem so happy together!

Switching genders, and from reality to fiction, we all know that John and Abhishek’s characters got past their issues and got together about 6 months after Dostana was over, right?

And that something was missing, since they never wanted to settle down or get serious with any woman, but had no problem building a life with each other.

Going back to reality, I know I don’t usually do videos in these posts, but if you haven’t seen this one, it is an absolute MUST!  Two celebrities who are officially not gay (or at least, officially in love with and committed to their wives) but also comfortable being casual about their sexuality in public, finally meet and give the world the image it so craves.

And over to the ladies for a moment.  Personally, my against the grain reading of KKHH is that Kajol is a stand in for Karan/a shy young gay man and it is the SRKajol romance that codes as queer (best friend yaar).  But there is a strong contingent which sees the Kajol-Rani situation as a butch-femme kind of thing.  Which works, I suppose, if you remove Shahrukh from the picture below entirely.  And forget they are cousins in real life.

Speaking of common against the grain readings, shower scene in Silsila anyone?  Where they actually have a blink and you’ll miss it “drop the soap” joke? Back to real life!  Zoya and Reema are the younger generation, but we also have the elegant older generation to look to.  Rekha and Farzana, together for over two decades.  Very classy looking couple. Even back in the day when they first got together.

One more real life example!  Although they are just friends, not a couple (although my fanfic suggests more!).  I do love the whole Karan-Manish vibe though. 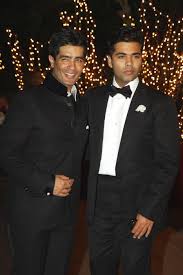 Speaking of people Karan could be dating but isn’t, I also kind of like his vibe with Ayan Mukherjee.  But Ayan, unfortunately, seems to have some kind of something with Ranbir Kapoor right now (unrequited crush, I am guessing).  So that’s not happening (again, unless you read my fanfic)

Let’s see, have I done everything/everybody?  I think so!  It’s time for the grand finale.  One of the all time greatest and sexiest jodis in Indian film.  Saif and Akshay!!!!  So cute together!

With that fun kind of opposites attract fighting all the time sort of chemistry. And sometimes kind of sweet:

(why is Kareena here?  Who is interested in her?)

20 thoughts on “TGIF: Happy Pride Weekend! Let Us Look at the Gayest Images in Indian Film”