Also, all women in pink!  Because I want to see if I can make joyomama’s head explode in the comments (for those who don’t know, regular commentator joyomama is a fashion historian who writes about gender color preference).  Oh, and also because I’ve gotten a couple of people pushing back against the standard TGIF.  So no objectification and no men and no SRK in this one!

Disclaimer: Fashion is not my area, so if I get something wrong, please please correct it in the comments!

It’s a fitted top with a highwaisted full skirt below.  And below the skirt, leggings.  The skirt can be floor length or knee length or sometimes of uneven length.  There is usually a heavy thick border on the skirt and around the waist and neck, which both looks cool and helps it hang correctly.  It’s named after the historical “Anarkali”, the legandary dancing girl who Prince Salim fell in love with, Madhubala’s character from Mughal-E-Azam, so really I should have a picture of her instead of Mallika up there immitating her.  But I couldn’t find a good full length shot, the best I can do is this:

Along with the leggings and long top/skirt combo, there is also usually a dupatta, because Indian women always have a dupatta, draped around somewhere.  Here’s Aditi almost swallowed by hers:

Sometimes you will see this in the English language press described as a “dress”, and I guess maybe technically they are?  But they are thought of as more like a Salwar, you wouldn’t wear just an Anarkali without leggings, or at least it would be thought very odd, even if the same person would go out in a much shorter western style dress with nothing underneath.  They work especially well for dancing, the full skirt and weighted border swings nicely to accentuate steps, and the leggings provide modesty as the skirt spins.

So, on with the post!  Women in pink Anarkalis.  Starting with Madhuri, because I love her.  She is wearing a chiffon version, which is interesting because of all the layers int he skirt, and the embroidery which helps to weigh it down.

Meena Kumari’s Anarkali is almost as famous as Madhubala’s.  And once again, is on a dancing-girl type character.  Anarkali’s don’t necessarily signify a woman of lower class, but they might, since they are what you would wear to dance in certain dancing traditions, and dancing-girl=sex worker. Notice Meena’s skirt is a little shorter, so you can admire the footwork and hear her anklets.

Sridevi comes from more of a Bharat-Natyam tradition if anything, so you wouldn’t expect her to dance in an Anarkali.  But she can wear the longer version and look lovely at an event. 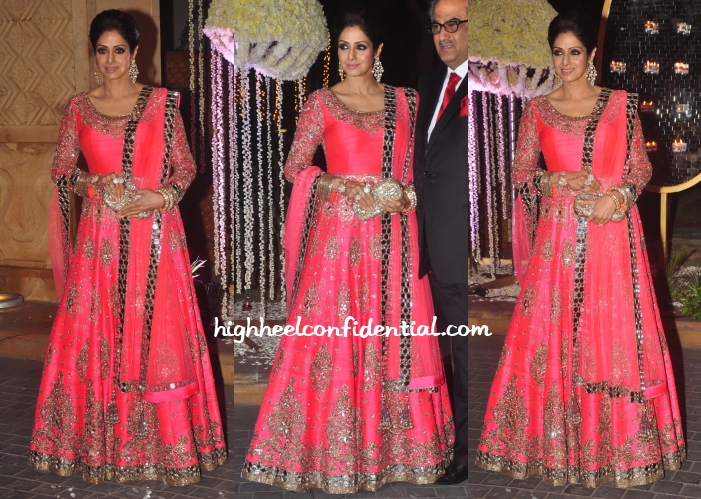 Juhi has been wearing Anarkali’s more and more as she ages.  And they look lovely on her, hiding any little slips and sags better than a sari would, and giving her a certain tall grace she wouldn’t normally possess.  This is an interesting variation, a lighter and slimmer skirt. 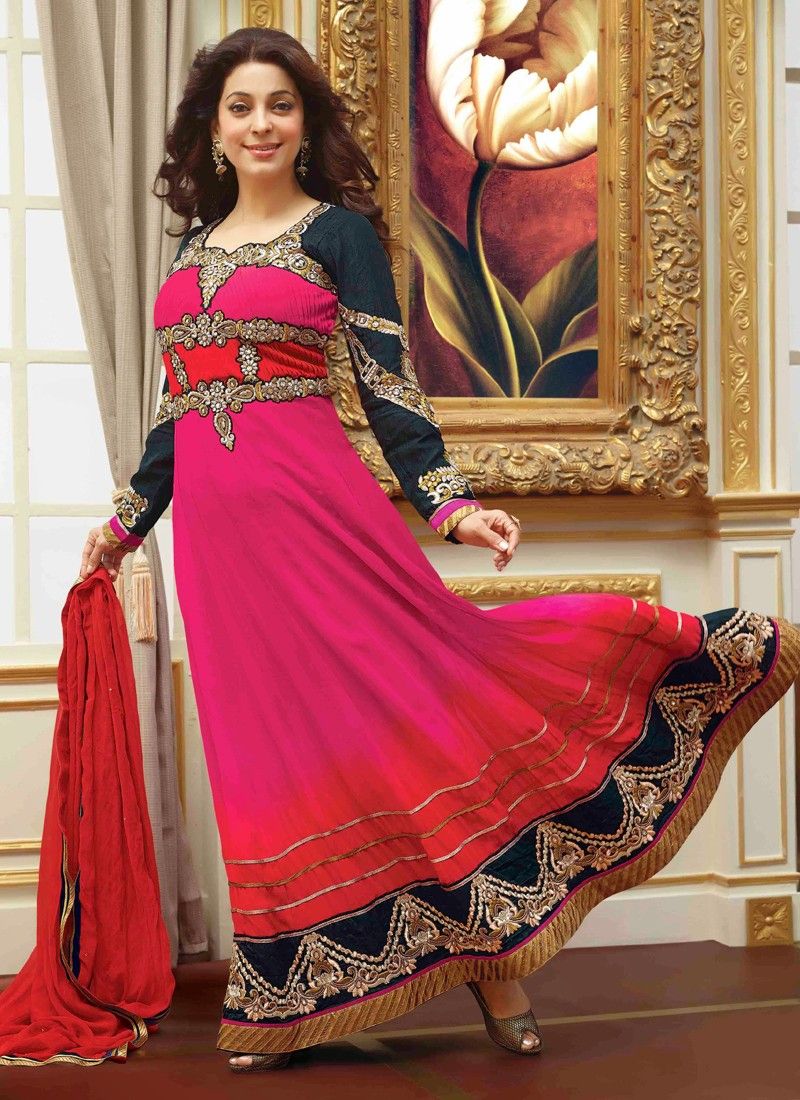 Here’s a fuller skirt, but lower waist than usual. Aditi Rao Hydari is another one who wears a lot of Anarkalis.  I assume mostly because she likes them, but also because they look good on her very slight frame, better than a sari might which requires a fuller figure. 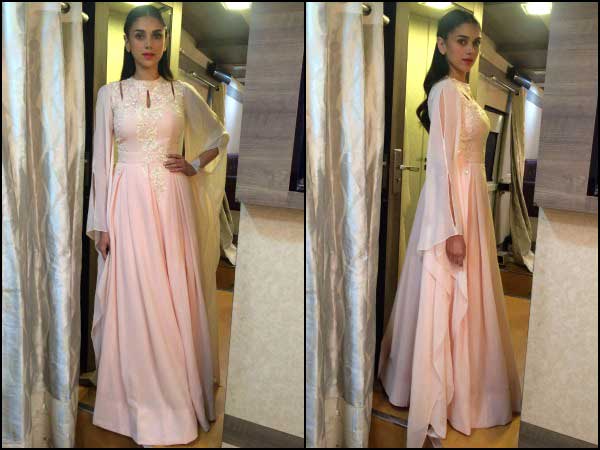 She also looks great in pink!  Which lets me post many photos.  A double skirt on this one which makes it even more modest than the leggings alone would.

This is a lovely classic formal version, complete with tight belted looking high waist, and very full skirt.  And of course dupatta. One thing about the Anarkali, there is so much fabric to it, that you have to be careful you are wearing it rather than it wearing you.  Alia, for instance, is a little too young and unsure to pull it off, I think.

Fashionista Sonam Kapoor, on the other hand, pulls it off easily.

And with a lighter touch

And for a runway show.  Interesting variation here, the top is really a jacket with long skirt, and then a separate skirt underneath it.

Speaking fashionistas, check out Kareena in this floaty chiffon version, with a similar over and under skirt.

And for the un-fashionista side of things, I have long held a theory that Aishwarya isn’t actually that good of a dresser, she is just so beautiful that we don’t notice.  For instance, this Anarkali somehow doesn’t feel as good as it could be to me.

And this one is definitely off. 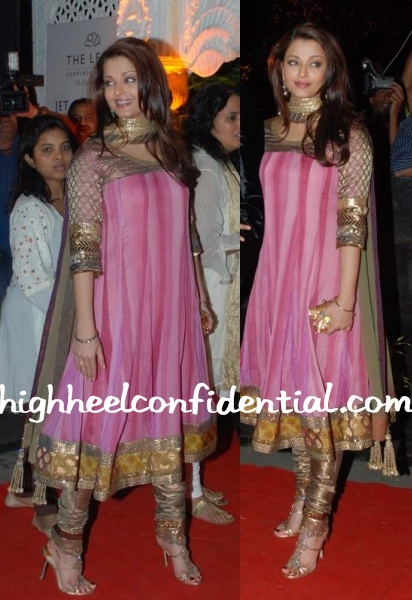 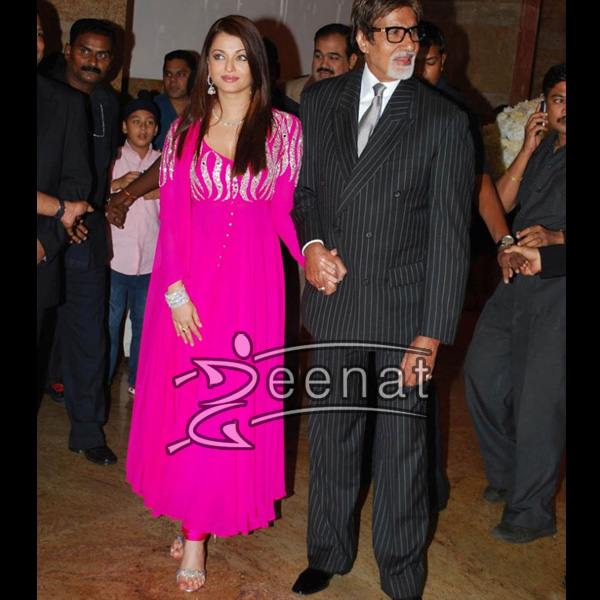 Katrina, similarly, I often find myself thinking she could be better dressed.  Like in this outfit, which in concept made sense, a slit up the side to allow her to dance, which after all was the purpose behind the original Anarkali design, just altered for a new style of dancing.  However, in practice, this is a disaster I think. Here’s Kangana doing a better job of showing how an Anarkali works in action. 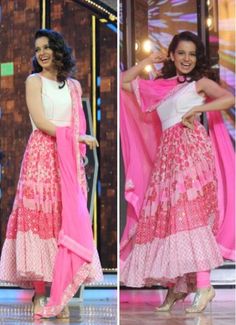 Speaking of dancing, love this picture! Shabanaji showing how her Anarkali spins.

I don’t think I can possibly top that last image, so I will end here.

Now, three questions to get the discussion started:

2. If you could only purchase one of these, which would you purchase?

I think I would go for Sonam’s.  I’d make the neck a little higher and add sleeves, but I love the rose embroidery and the fit and the drape.

3. Which of these would you LEAST like to purchase?

I would have to go with Katrina’s I think.  Very few people can pull of the slit skirt look, and I am not one of them.

17 thoughts on “TGIF: All Women in Anarkalis! For the Women’s March Anniversary Tomorrow”