Yes Priyanka Chopra is no more part of @Bharat_TheFilm & and the reason is very very special , she told us in the Nick of time about her decision and we are very happy for her … Team Bharat wishes @priyankachopra loads of love & happiness for life 😊😉😍

My favorite part of that tweet is the replies.  I scrolled through the first twenty, and no one cares about PC.  The focus was on who to replace her, with Katrina immediately the forerunner.  To be fair, this is people who follow Ali Abbas Zafar the director, so presumably interested in his films, not just celebrity gossip. But still!  The whole tweet is about PC, and everyone just skipped past that and jumped right to recasting.

People magazine, the reliable boring gossip source in America, confirmed through “sources” after seeing this tweet that there was an engagement.  Two things that are repeated everywhere, Nick shut down a New York Tiffany’s to find the ring, and he proposed on her birthday (link here).

The engagement is one thing, and I am sure we will all have many many thoughts, but dropping out of Bharat is a whole different story!!!!

As I’ve said before, I prefer BollywoodHungama to any other source partly because it is so leak-friendly.  If you want to get a story out there without your name attached to it, BH will print it.  And the result is, there were two competing versions of this story posted within an hour of each other.

The second is the leak from the Bharat/Salman team.  This “source” says (link here):

“This is madness. Considering, it was Priyanka Chopra who was keen to be in the film. She approached Salman and his director Ali Abbas Zafar at a time when they had almost finalized Katrina Kaif. Priyanka told them she wanted to come back to Bollywood. Now, when Bharat has gone on the floors she has second thoughts?”

“The director, who is a close friend of Priyanka, doesn’t want any ugly controversy about Priyanka’s exit. So he’s making it sound like an amicable parting, which it is not. Salman is hardly going to be pacified by the marriage alibi. Considering, it was she (Priyanka) who wanted to be part of the project. And, now she’s had second thoughts because of marriage? Nonsense! If she was getting married, she’d have planned it for after shooting for Bharat. This is not small film and opting out of it more or less seals her plans for a Bollywood comeback.”

And this is right after the first BH post, with no “sources”, that had a much happier spin on things (link here):

PC made no bones about hiding her relationship with Nick and even got him to India to meet all her close friends and family. The two are inseparable and PC too has bonded effortlessly with his family back in the States. It is therefore not surprising if she wants to take this relationship to the next level. We wish the lovebirds all the best.

Setting aside the engagement itself, opting out of Bharat is….odd.  The fact is, it is her big come back movie.  And it is a very big deal that she landed the role.  And all logic says that someone else was probably the first choice, Salman likes to work with familiar actresses and he hadn’t worked with PC in years.  Not that it was crazy to choose her, Salman’s last few films have been struggling, makes sense to try a big name combination and get some publicity and so on.  But it is also obviously something PC must have wanted.  Her name wouldn’t even come up unless she put it forward, she’s been off in America doing American things, there is no reason to think of her unless she asks to be considered.

For her career, and also just for common decency, it makes sense to finish the movie.  Priyanka has been announced for months, filming is started, all the publicity and everything else is planned around her, not to mention now they have to find some actress available at the last minute to fill in.  And, while mostly all publicity is good publicity, this isn’t great publicity.  Kind of makes the film look like a loser to have someone dump it.  And just for an engagement?  For comparison, Asin put off getting married for two years because she felt she had a commitment to finish and finish promoting her final movie.  As soon as it came out, she got married.  But her work commitments came first.  I’m not asking for Priyanka to wait 2 years, but couldn’t she manage to be engaged and also finish 4 months of shooting (or whatever it is)? 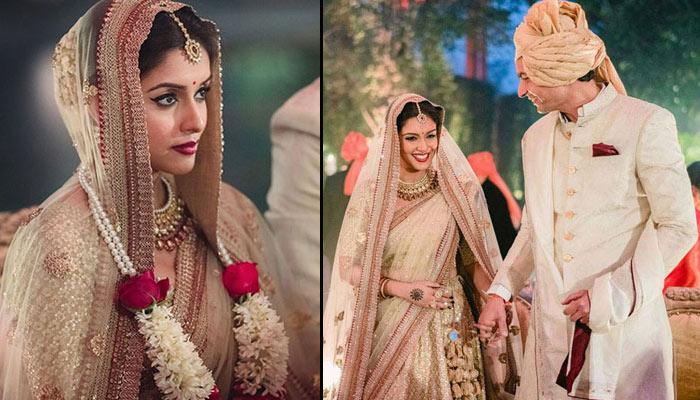 (Wedding looks spectacular.  So she also managed to plan this whole thing, while finishing filming and promotion commitments)

And there is the obvious comparison, Aish dropping out of Heroine last minute when she was pregnant.  Which was also a bit of a to-do.  Not that she got pregnant, of course an actress can get pregnant.  But that she didn’t give her director warning and help him plan.  There was a mad scramble to find a replacement and it was a big thing.  And pregnancy is something that is both somewhat out of your control, and involves actual physical changes that make you unable to do everything you could before.  But just an engagement?  Can’t you choose when to announce it and what to do about it?  And can’t you do your work just like before even with the extra weight of a ring on your finger?

There could be a bunch of things going on here just with the Bharat announcement and I don’t know what it is:

And there is also this possibility, which I find unlikely based on what was leaked to BH:

4. The Bharat team hated her and fired her but is announcing her departure in a way that saves face for all involved.

69 thoughts on “Stop the Presses: Priyanka Out of Bharat!!!!! And Also Engaged”